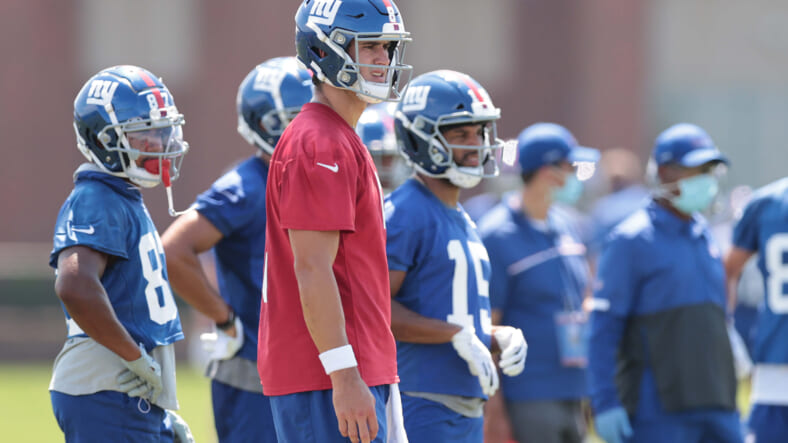 New York Giants quarterback Daniel Jones has been put through the wringer the past few seasons as he prepares to enter the 4th year on his rookie contract. Management has already declined his 5th year option based on a lack of information and poor production at the NFL level, but Jones isn’t the only one to blame.

Having gone through three different offensive coordinators and multiple head coaches, Jones is now preparing to learn a new system and put it to the test in what could be the final year of his tenure with Big Blue.

Former receiver Golden Tate advocated for Jones recently, indicating that he has all the talent in the world but has been held back by poor management.

Speaking in an interview with NJ Advance Media, Tate detailed the mismanagement that has put Daniel Jones’s career in peril.

“I honestly feel bad for Daniel,” Tate said. “He was drafted into a rebuilding organization for one, had Pat Shurmur for a year and then got Joe Judge for two years, now another head coach and another rebuild going into his fourth season. He hasn’t had Saquon [Barkley], myself, [Kenny] Golladay, Sterling [Shepard] — no one is ever on the field at the same time. And then on top of that, he had [Jason] Garrett [as his offensive coordinator] and that probably didn’t help much.

Last season, Jones tossed 10 touchdowns and seven interceptions for 2,428 yards. He played in just 11 games, the least amount in his career after he suffered a neck injury against the Philadelphia Eagles. Jones tried to supplement deficiencies on the offensive side, running the football and taking too many risks with his body.

“So you kind of feel bad for him because a ton of talent. He has a lot of talent but he just hasn’t had much help due to injuries and how they set it up.”

It might be too little, too late for the Giants and Jones:

Looking into the future, new head coach Brian Daboll and OC Mike Kafka should build a far more potent and modern offense. Right off the bat, we should expect to see far more pre-snap motion and a different approach to managing injuries.

The hope is that Jones is able to extrapolate on his strengths and let the football fly.

Tate has a great point regarding Jones’s attributes and allowing him to be creative with the football in his hands. Jason Garrett’s offensive scheme over the past two years has deliberately mitigated offensive flexibility. Building one-read concepts into the system and failing to create a competent offensive line are all issues that impacted Jones’s success.

Hopefully, rebuilding the trenches and providing even more playmakers should boost Daniel’s statistics, but it might be too little too late for the former 6th overall pick.