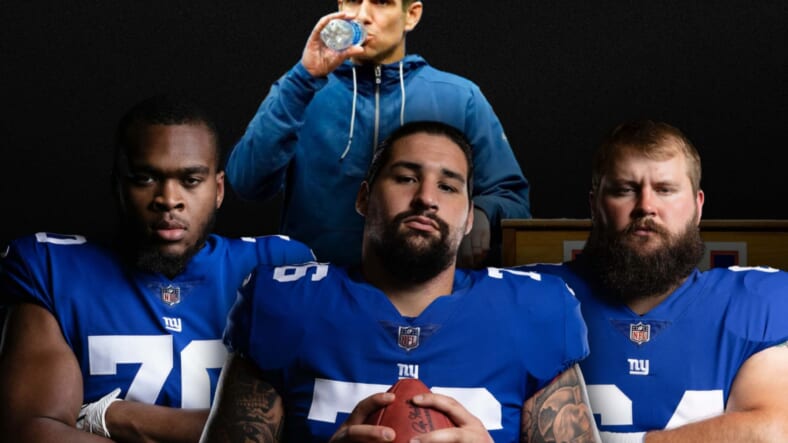 Rebuilding the offensive line has been a difficult challenge for the New York Giants over the past decade. Former general manager, Dave Gettleman, struggled considerably to piece together a competent unit that didn’t put his quarterback at risk every week.

Gettleman spend the 6th overall pick on Daniel Jones in 2019, but he failed miserably to protect him, which has stalled his growth over the past three seasons. However, new GM, Joe Schoen, has overhauled the entire unit without overspending. The Giants had minimal salary space to utilize this off-season, but what Schoen did to plug massive weaknesses was quite masterful (on paper).

Andrew Thomas is the only holdover from the previous management that has a cemented starting job on the line. He took a monster step forward in 2021. In fact, he went from giving up 10 sacks and 57 pressures during his rookie campaign to just two sacks and 18 pressures last season.

Thomas is still on his rookie contract, set to count $8.8 million against the cap this season.

One of the more low-key signings Schoen made was Max Garcia, a Pro Bowl alternate with the Arizona Cardinals last season. Garcia signed a one-year, $1 million deal.

Garcia has the experience to be a plug-and-play starter at left guard for the Giants, especially since most of his best seasons came at the position back in Denver during the 2015-16 seasons. The Giants have plenty of competition at left guard, with Shane Lemieux and Josh Ezeudu in the mix as well.

Schoen and head coach Brian Daboll advocated for free agent interior lineman Jon Feliciano to take over at center. Despite only having 323 total snaps at center in his career, management is committed to giving Feliciano a chance to lock down the position and snap the football to Daniel Jones.

Feliciano is on a one-year deal worth $2.9 million, so he’s earning a nice chunk of change to try and justify being a long-term solution.

In the past, the Giants would dish out monster contracts to offensive linemen instead of drafting successfully. Gettleman handed out a four-year, $62 million deal with $34.8 million guaranteed at signing to Nate Solder back in 2018. As most are aware, Solder’s presence with the Giants was a net negative and they ultimately released him with a void year in 2022, counting $4 million against the cap.

However, Schoen took a far more conservative approach toward spending, given the team’s financial limitations. He targeted Indianapolis Colts guard Mark Glowinski in free agency, handing out a three-year, $18.3 million deal. This is a far more reasonable contract for a player who finished the 2021 season on a strong note. In fact, Glowinski didn’t give up a single sack after Week 9 and allowed just one QB hit during that time span.

With the 7th overall pick, the Giants drafted Alabama stand-out tackle, Evan Neal. Neal is an incredible athlete at 6’8″, 345 pounds. Neal gave up two sacks over 1,073 snaps last season, an efficient number that showcases his quality.

While Evan likely has a few kinks to work out in pass protection, he is a massive human being that can move bodies in the running game. With the right coaching, Neal could be a staple on the line for years to come, finally situating two book-end tackles.