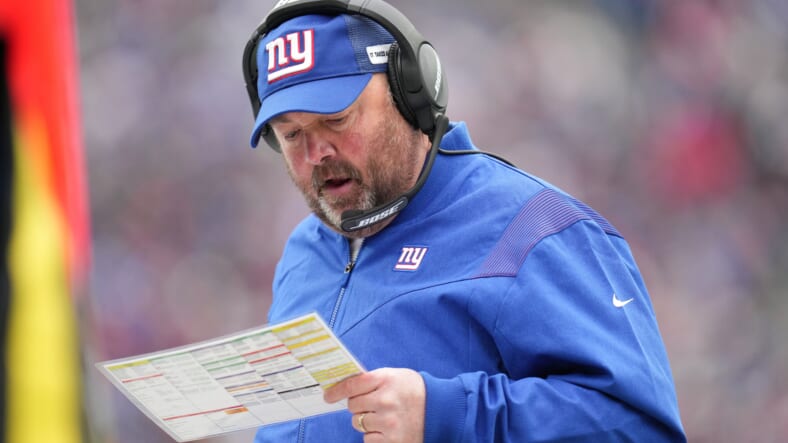 New York Giants offensive coordinator Freddie Kitchens in the first half. The Giants defeat the Eagles, 13-7, at MetLife Stadium on Sunday, Nov. 28, 2021, in East Rutherford. Nyg Vs Phi

One of the biggest questions heading into the 2022 season for the New York Giants is quarterback Daniel Jones. Investing $30 million into a player needs to be justified. Jones’s struggles have been far and wide, but he’s learned some valuable lessons along the way.

Whether it be poor coaching, health, or simply inadequate roster construction, Jones has been put in a tough spot from the get-go. He’s been through three offensive coordinators and multiple head coaches, but he might be in the best situation of his entire career with Brian Daboll and Mike Kafka leading the offensive unit.

Both coaches are coming from some of the best offenses in football, whereas Jones had Jason Garrett and his 2004 Norv Turner offense the past two seasons.

One former coach believes that Jones has great traits but is being held back by one primary factor.

“I think Daniel began to understand that [the importance of staying healthy],” Kitchens said. “It was just an unfortunate deal, but I do think Daniel’s grown a lot from that aspect of things and understands that he kinda carries the team on his back as far as their future because he wouldn’t be starting unless he was the best chance to win. He’s started to understand that better.”

Last season, Jones suffered an apparent concussion against the Dallas Cowboys in Week 5, foaming at the mouth and stumbling around the field after taking a huge hit to the helmet. Several weeks later, against the Philadelphia Eagles in week 11, Jones dove headfirst into a tackle, hurting his neck, which ruled him out for the remainder of the season.

“I think early on you’re out there for the team” he added, “you want to do what’s best for the team and all those sorts of things and you kinda get carried away at times, but he’s gotten a better grasp of that I think and I know he has moving forward.”

Jones has learned a difficult lesson when it comes to protecting his body from harm. Trying to put too much pressure on himself to create plays was always going to result in something negative. The team needs everyone to execute at a high level if the offense wants to be productive. There’s no one player that can save the day, but it was a valiant effort by Jones nonetheless.