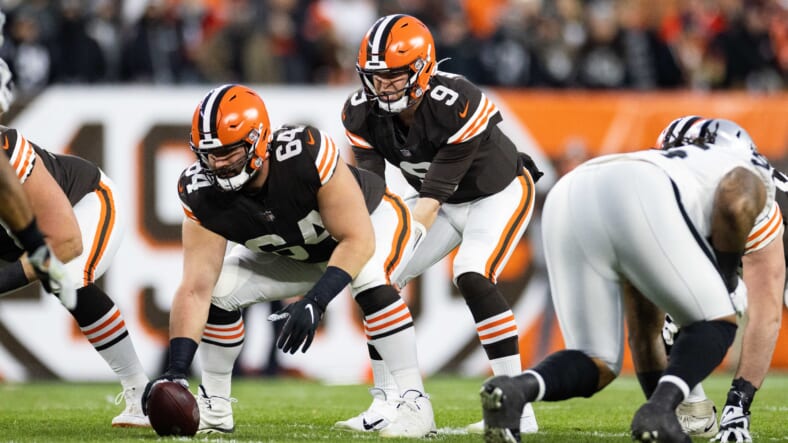 The New York Giants have done plenty to upgrade their offensive line this off-season, but there’s always room for improvement. The Giants signed Max Garcia, John Feliciano, and Mark Glowinski. They also drafted Evan Neal and Josh Ezeudu to help upgrade the unit.

The OL has no chemistry up to this point since the only holdover starters (potentially) are Andrew Thomas and Shane Lemieux. Thomas is a set-in-stone starter, having dominated during the 2021 season, but Lemieux is fighting for a shot at left guard.

The Giants have plenty of talent at left guard to sift through come the regular season, but center could end up becoming a problem considering Feliciano has minimal experience at the position.

Feliciano has just 323 total snaps at center in his career, so relying on him to be a consistent option might be optimistic.

If the Giants want to upgrade the center position significantly, they could look toward J.C. Tretter as a potential plug-and-play option off the free-agent market. The Giants only have $6.2 million available in salary space, but Tretter would give Daniel Jones the peace of mind knowing the center spot won’t be overwhelmed due to inexperience.

Last season with the Cleveland Browns, Tretter allowed just one sack and 10 pressures over 1,039 snaps. He was arguably the best pass-protecting center in football, which should be music to every Giants fan’s ears. The problem is, Tretter will likely cost a pretty penny, so the Giants would have to sign him to a multi-year contract and push some of the cap hit down the road.

One low-key option is former New York Jets guard Alex Lewis, who last played in 2020. Lewis has over 2,000 snaps at right guard in his career. Lewis could simply be a camp body since he hasn’t latched on with the team just yet. During the 2020 campaign, he enjoyed 544 snaps, giving up 24 pressures and zero sacks.

Alex is an average run and pass-protecting guard. Nothing more, nothing less. Considering the Giants’ lack of depth at guard the past few seasons, it can’t hurt to bring in more competition at a cheap price point.

Another option is Laurent Duvernay-Tardif, who spent last year with the Jets and played 390 total offensive stats.

He gave up one sack and 20 pressures during that sample size, which is a sizable amount. However, he spent five years with the Kansas City Chiefs, so he likely has a bit of experience with new offensive coordinator, Mike Kafka. Back in 2017, Tardif was a solid pass-protecting right guard, and if he’s looking for a chance to compete or fill a reserve role.