Not the Nets’ first choice but proves to be the right choice: Jacque Vaughn off to impressive start 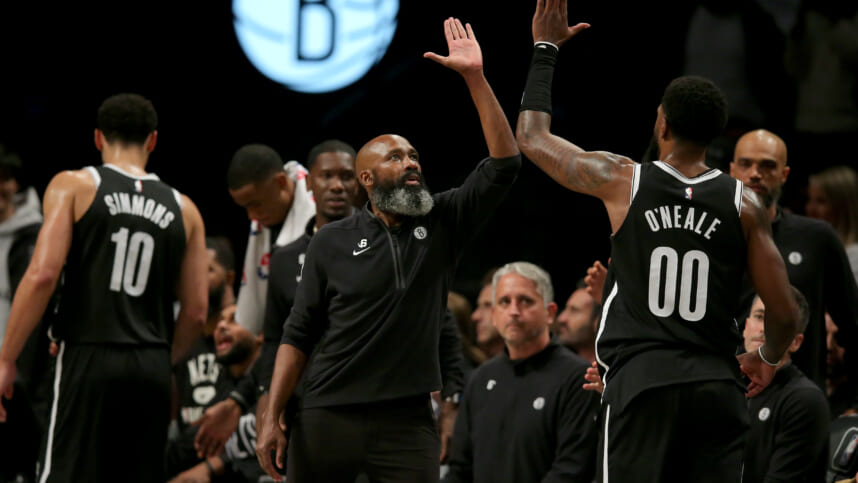 With the interim tag lifted off Jacque Vaughn, the good vibes around the Brooklyn Nets since he took over went up to another level.

The Nets displayed a total buy-in as their suddenly elite defense pummeled their crosstown rival New York Knicks to a massive 112-85 win Wednesday night that ushered in a new era in Brooklyn.

Before the lopsided rivalry game, Vaughn was officially named as Brooklyn’s new head coach, succeeding Steve Nash, with a new contract that reportedly runs through the 2023-24 season.

It was a long time coming for Vaughn, who also guided the team for 10 games and a playoff series in the Orlando Bubble, bridging the Kenny Atkinson to Nash era.

It was business as usual for Vaughn, who wasn’t seriously considered until the potential backlash kept the Nets from hiring suspended Ime Udoka.

“I guess I was the write-in candidate in the minds of the elections right now, but I’m okay with that. I said to my wife, I might not have been her first choice, and we’ve been together 20 years, so it can all work out.”

It seems to be working out for the Nets as he brought stability and guided the team to a solid 2-1 road trip before trashing the Knicks in full display of their potential.

The Knicks never had a chance against the Nets’ resurgent defense, which forced them to a season-low 32.2 percent shooting night. It was the fourth straight time that the Nets have held their opponents to under 100 points and for the first time since an eight-game stretch in the 2014-15 season.

Vaughn’s imprint is all over this Nets’ resurgence.

Joe Harris, currently the longest-tenured Nets player, explained in detail what Vaughn brought to the team.

“JV is a great coach. Having played in the NBA for a while, been a coach in the league for a while, having experience as a head coach, having a lot of experience now as an assistant, he’s seen a lot, had a lot of different experiences, he’s kind of fine-tuned what his approach is.

“He really just simplifies the game, I said that when we were in the bubble, same thing, but he makes sure that everybody is fully aware of what’s going on. He’s the type of coach we go through a scout [report] — there’s going to be a lot of transparency and dialogue. It’s not just him speaking hoping everybody understands. It’s a collective thing where he makes sure that everybody fully is aware of what’s going on and understanding what’s happening.”

It looked simple against the Knicks, with Kevin Durant typifying the Nets’ unselfish play that led to a season-high 30 assists. Durant had 12 of those assists off double and triple teams as the whole team played for each other.

Even without the suspended Kyrie Irving, the Nets have looked like a contender under Vaughn, with their defense jumping from one of the worst to league-best almost overnight.

“I’m excited for [Vaughn]. I know the works that he puts in every day. I know how much he cares about the development of each player and this team as a whole. I’m looking forward to playing for him. All the guys have responded to how he wants us to play. So I’m looking forward to how we progress after this.”

Vaughn might not be the Nets’ first choice, but proves to be the right choice.