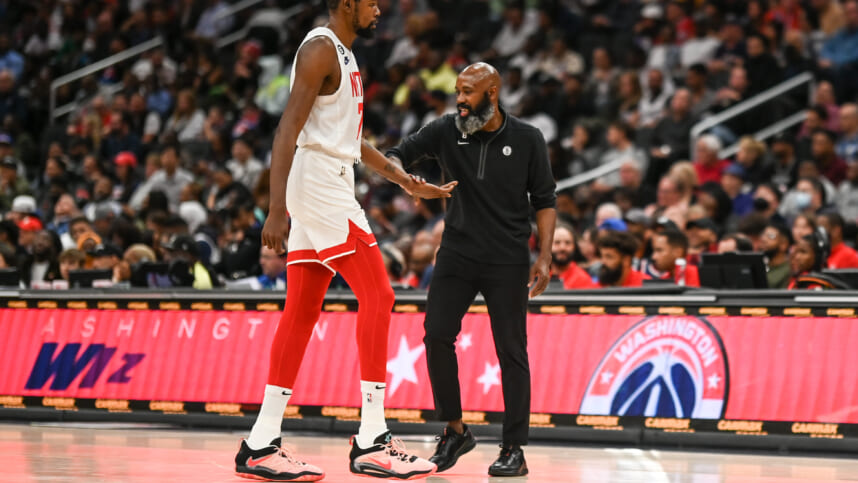 The Brooklyn Nets have abandoned their pursuit of Ime Udoka and instead named Jacque Vaughn as Steve Nash’s permanent replacement.

After ‘strong voices’ reportedly urged Joe Tsai to back off the Nets’ intent to hire Udoka, they quickly pivoted to Vaughn, who has been impressive in his four games coaching the team in the interim.

The Nets have responded to Vaughn’s coaching as they posted a 2-2 record since taking over from Nash. Vaughn quickly transformed the team into a cohesive defensive unit. They have registered a 102.1 defensive rating, the third-best during that stretch — a massive jump from the second-worst 112.6 defensive rating they had under Nash to start the season.

“Jacque’s basketball acumen, competitiveness and intimate knowledge of our team and organization make him the clear-cut best person to lead our group moving forward. He has a proven ability to get the best out of our players, hold them accountable and play a cohesive team-first style of basketball.”

What’s even more impressive is Vaughn navigated his first four games without the suspended Kyrie Irving and Ben Simmons, who has just returned from left knee soreness, for three games.

Vaughn’s new deal as the Nets’ head coach is for two seasons, per ESPN’s Adrian Wojnarowski.

The 47-year-old Vaughn is the longest-tenured member of the Nets coaching staff. Before moving to Brooklyn in 2015, he spent two-plus seasons as Orlando Magic’s head coach and one season as a pro scout.

Vaughn was also Brooklyn’s interim coach for 10 games (7-3) after Kenny Atkison was fired during the 2020-21 season. He guided the team through the first round of the playoffs against the Toronto Raptors in the Orlando Bubble.

Vaughn will coach the Nets without the interim tag beginning Wednesday’s rivalry matchup against the New York Knicks.