Markieff Morris confident Kevin Durant-Nets relationship works out like his marriage: I broke up with my wife a couple times, we still married. Sh*t works! 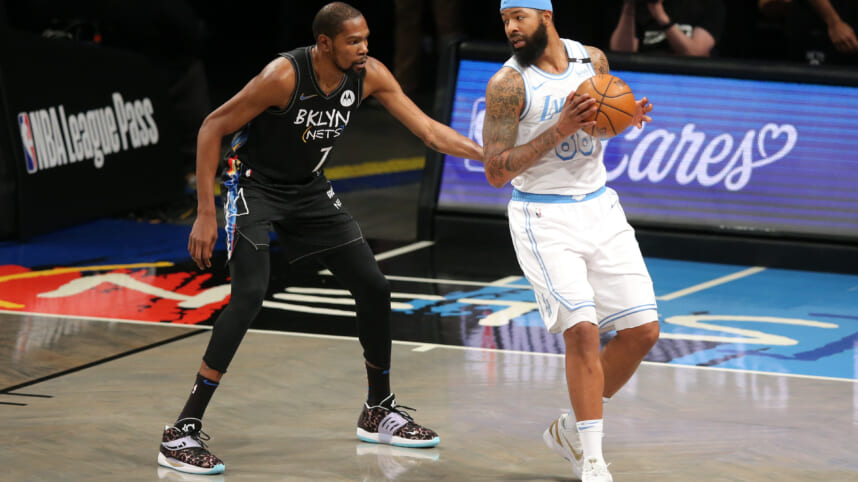 After nearly breaking up last summer, Kevin Durant and the Brooklyn Nets are back in each other’s arms.

Will it be sweeter the second time around?

“That’s the NBA, man! You break up with a girlfriend, you get back with it. Same sh*t! You air your differences until you figure them out.”

A follow-up question — does it work? — pushed Morris to reference his marriage.

“Yeah! I mean I broke up with my wife a couple of times, and we’re still married. Sh*t works! Sometimes you need space to figure things out.”

After more than two months since Durant demanded a trade, the Nets could not find a suitable trade partner to give them the commensurate package for their franchise superstar. That space was enough for Durant and the Nets to figure things out and get on the same page.

Durant candidly revealed the reason behind his trade request last summer. He hopes his grievances won’t fall on deaf ears as the Nets work out to establish a culture of accountability that would erase their superstar’s doubts of their ability to build a championship contender.

Nets coach Steve Nash, whom Durant asked to be fired along with GM Sean Marks in an ultimatum that team owner Joe Tsai did not grant, agreed with Durant’s assessment of their last season debacle. After their grievance meeting, Nash believes their relationship with their franchise superstar remains as strong as ever.

“We’re fine, we’re good. Ever since we talked, it’s been like nothing’s changed. I love the guy. Families have issues. We had a moment, and it’s behind us. That’s what happens. It’s a common situation in the league.”

With everything in the rearview mirror now, the Nets are banking on a clean bill of health — with Joe Harris, Ben Simmons and Seth Curry all healthy — and Kyrie Irving’s full-time availability now that the vaccine mandate has been lifted in all NBA markets.

They have the third-best championships odds (+700) behind the Los Angeles Clippers (+550) and last season’s NBA Finals protagonists Golden State Warriors and Boston Celtics (+600), per Draft Kings.

But the championship odds are far from Durant’s mind as he doesn’t want the Nets to skip steps this season. His prerequisite is to have a team that will command respect in the NBA community, which he felt they didn’t get last season.

But if they get it all together, Simmons likes their chances.