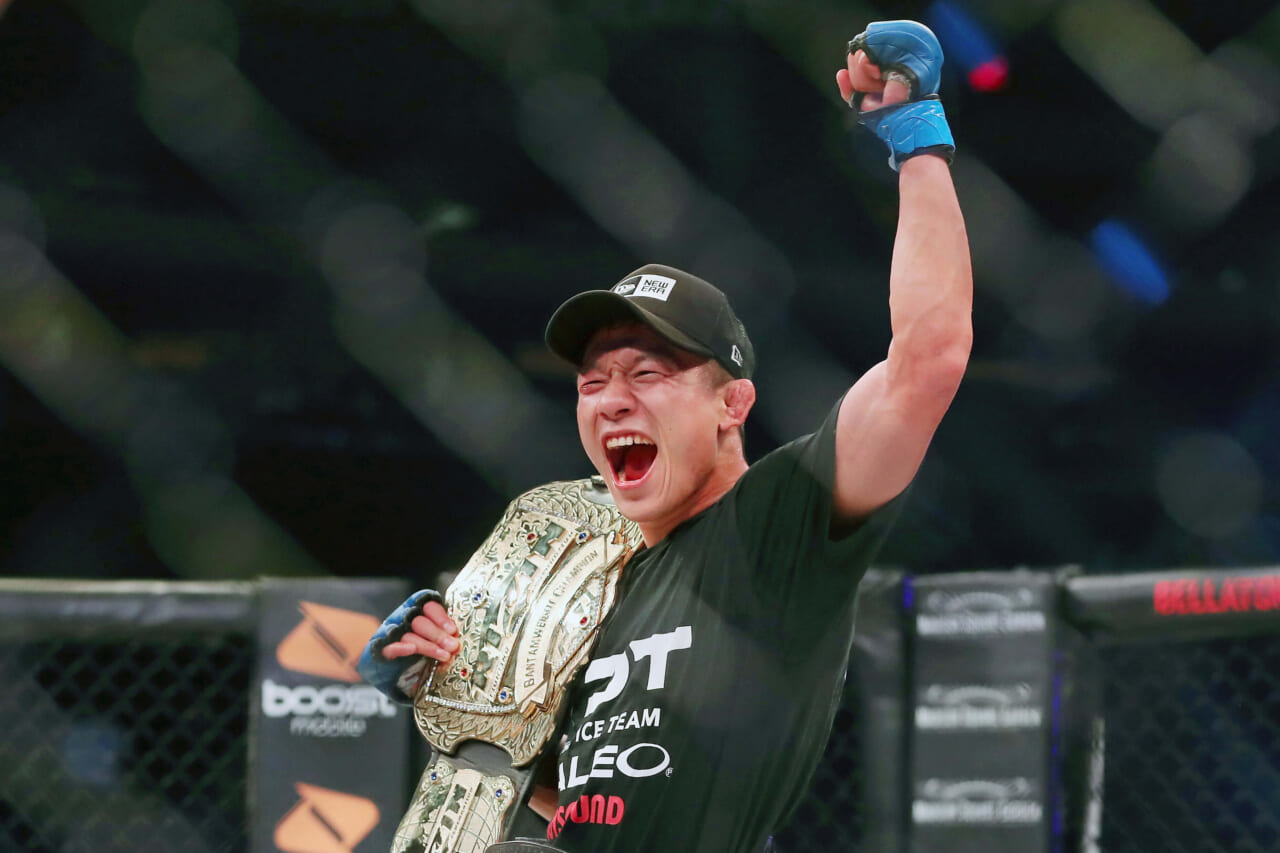 Last weekend at Bellator 279, we saw the Bantamweight Grand Prix kick off with two tremendous matchups. In one of those matchups, the interim bantamweight championship was on the line as former champion Juan Archuleta (25-4) took on Raufeon Stots (18-1).

Archuleta was looking to regain a piece of the Bellator title after losing it to Sergio Pettis. However, Pettis’ teammate Stots had different plans. After going back and forth through the first couple of rounds, Stots ended things quickly in the third with a head kick.

Earlier on in the Bellator 279 card, another former champion returned. That former champion was Kyoji Horiguchi (29-5) and he was taking on grappling expert Patchy Mix (16-1). Horiguchi was coming off of a loss to Sergio Pettis where he was dominating before getting knocked out.

This fight was going to come down to where it took place. Horiguchi needed to keep things standing as he was the much sharper fighter and had much better speed. He showed that at Bellator 279 when there were striking exchanges.

However, in three of the rounds, Mix was able to land takedowns and control the majority of the rounds. For that reason, the judges gave the fight to Mix 48-47 across the board and handed Horiguchi has second straight loss.

Prior to Bellator 279, the only two men in the tournament to have held gold were Horiguchi and Archuleta. Now, both men are out of the tournament before it reached the semifinals and now they need a new opponent.

See where I’m going with this? To me, the next matchup for Bellator is very easy to make. The move is to pair the former champions against each other with the winner staying relevant in the title picture despite being out of the Grand Prix.

Both of these former Bellator champions need a win and both will be desperate for one. That should translate to an excellent fight and it’s the one the promotion should look to make.

Tomorrow night on the main card of Bellator 279, the Bantamweight Grand Prix will kick off. One of the featured bouts pairs former bantamweight champion Kyoji Horiguchi (29-4) against former title challenger Patchy Mix (15-1).

Out of all the opening matchups of the Bellator Bantamweight Grand Prix, this is the one I’m the most excited for. In one corner, you have the former bantamweight champion Kyoji Horiguchi.

Horiguchi won the Bellator title back in 2019 and then vacated the belt. He returned to Bellator in December to try and win it back against Sergio Pettis. Horiguchi was dominating Pettis through three rounds. However, he was caught with spinning back fist in the fourth round and lost by KO.

Now, he’s looking to get back on track. Standing in his way is the grappling phenom Patchy Mix. Last time we saw Mix was back at Bellator 270 when he submitted James Gallagher in the third round of their fight.

Mix has won back-to-back fights since losing in his title fight against Juan Archuleta. This is a really tough fight for Mix, but if he can win, he will prove that he’s going to be a very tough out in the Bellator Grand Prix.

To me, this is going to be one of those fights that’s decided based on where it takes place. Let me be clear, Kyoji Horiguchi is one of the best fighters in the world, not just in Bellator.

He was walking through Sergio Pettis prior to getting clipped in December. Outside of that loss, he only has two other defeats since 2012. One was to Kai Asakura, a loss he’s already avenged, and the other was to arguably the greatest of all time in Demetrious Johnson.

Patchy Mix is insanely dangerous on the ground. If this Bellator 279 contest hits the mat, Mix can win by submission. However, I think we are going to see a lot of striking and it’s hard for me to see Mix outstriking Horiguchi.

Mix will hold his own, but I expect Horiguchi to get the win here. Too much skill and I think he shows tomorrow night why he should be the favorite to win this Bellator Bantamweight Grand Prix. 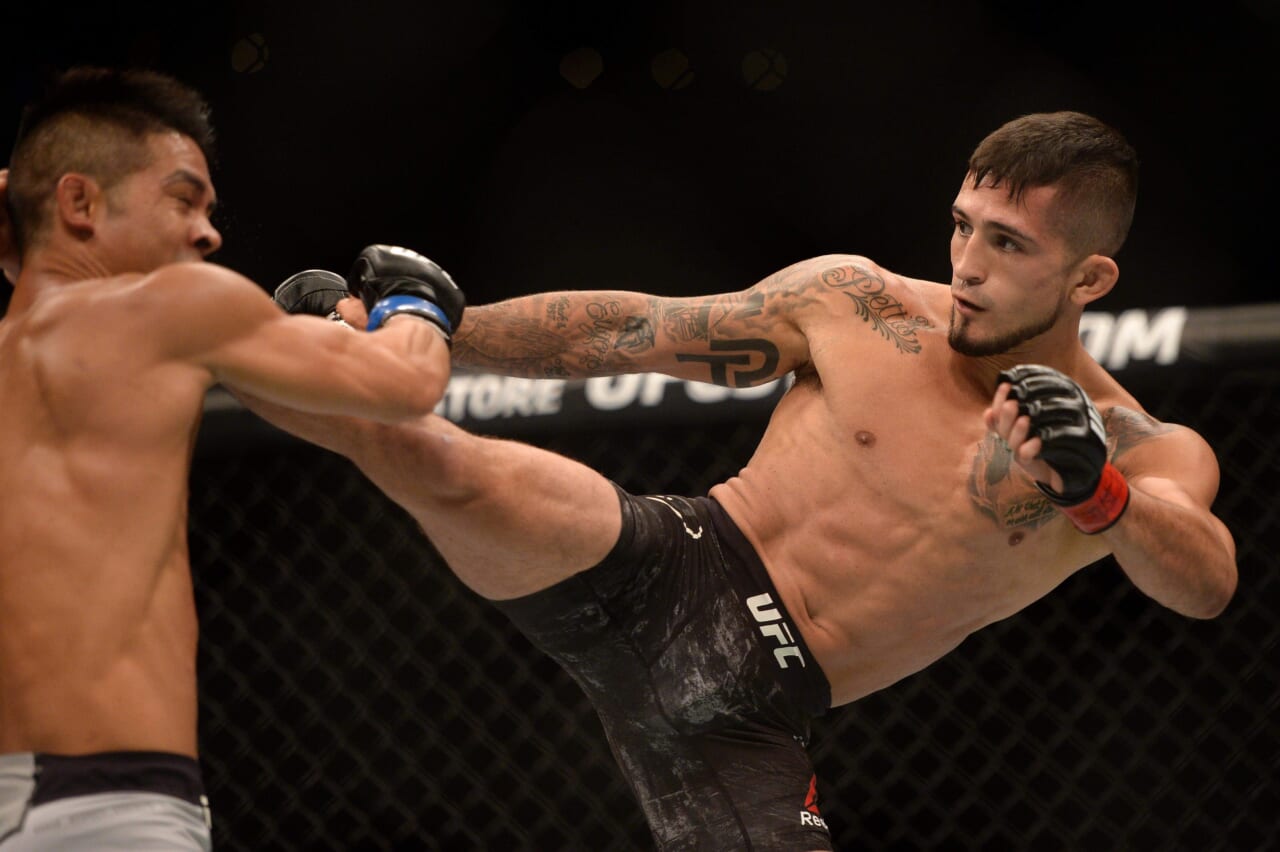 The highly anticipated 2022 Bellator Bantamweight Grand Prix finally has it’s start date. It was announced yesterday that the Grand Prix will kick off in April and it’s starting with a bang with two massive fights.

At Bellator 279 which takes place on Saturday, April 23rd. The promotion is starting fast and furious with one fight on the card being Kyoji Horiguichi (29-4) – Patchy Mix (15-1).

However, out of no where in the fourth round, Horiguchi was caught flush with a spinning back fist. That back fist knocked him out cold. The former champion is now 1-2 in his last three fights after only losing one fight between 2012 to 2019.

Standing in his way at Bellator 279 will be Patchy Mix. Mix had a title shot back in 2020 and like Horiguchi, it looked like he was on his way to becoming champion. However, he ultimately gassed out and lost to Juan Archuleta.

Since then, he’s bounced back strong with two straight wins. Most impressively was his win over James Gallagher at Bellator 270 where he submitted him. This matchup should be an absolute banger.

Bellator title on the line

Of course the headliner of the Bellator 279 event will be the bantamweight title fight between Sergio Pettis (22-5) and Raufeon Stots (17-1). Now, this fight has a very unique backstory that will unfold between now and the event.

Pettis and Stots are close friends and they both train together. With this event taking place, they are having to separate. All eyes will be on this fight between two men who know each other very well.

Pettis is a perfect 4-0 since joining Bellator after his stint with the UFC. He captured the title against Juan Archuleta and then defended it against Kyoji Horiguchi. Now, he’s going to be facing a teammate who has been surging.

Stots is a perfect 5-0 since joining Bellator. The only man to have defeated him in his professional career is top UFC contender Merab Dvalishvili. Now, he’s going to get the chance to finally prove that he’s the best bantamweight in the promotion.

Tomorrow night in the main event of Bellator 272, we will see a battle for the bantamweight title. The champion Sergio Pettis (21-5) takes on the former champion Kyoji Horiguchi (29-3). Horiguchi will be looking to regain the title that he never lost inside the cage.

Back in 2019 at Bellator 222, Horiguchi captured the bantamweight title when he defeated Darrion Caldwell by decision. That win made him a two-promotion champion between Bellator and RIZIN. However, Horiguchi never ended up defending his Bellator title.

Horiguchi went back to RIZIN and lost to Kai Asakura. He ended up relinquishing the Bellator title and secured a rematch with Asakura where he was able to avenge the loss back in December of last year. Horiguchi won by knockout.

The loss that he suffered was his first loss since 2015 when he lost to Demetrious Johnson for the UFC flyweight title. There are a lot of people betting on Horiguchi tomorrow, but heâ€™s going to have his hands full with Sergio Pettis.

Sergio Pettis has gotten off to a blistering start since jumping from the UFC. After a solid run in the UFC which included wins over Joseph Benavidez and Brandon Moreno, Pettis made the jump to Bellator in 2020.

So far, heâ€™s gone a perfect 3-0 with the promotion which includes capturing the bantamweight title. In May he took the title away from Juan Archuleta when he was able to outpoint him over the course of five rounds.

This is such a fantastic matchup and I really canâ€™t wait for this Bellator title fight. Iâ€™m expecting this fight to take place on the feet and it will be really interesting to see who is able to utilize their gameplan the best.

For Pettis, the key is going to be keeping the fight tactical from range. I really like the development Iâ€™ve seen in his striking and if he can make it a point fight, heâ€™s going to be in good shape. I also like his ability to take things to the ground and use his ground game if need be.

That said, the former Bellator champion has a lot of pop in his hands and that power could prove to be a big advantage. Horiguchi can end this fight with his power and I think his power has the ability to throw Pettis off and make things difficult for the current champion.

Iâ€™m expecting both men to find success in this one. I think Horiguchi is going to rock Pettis in the early rounds, however, I think Pettis will come on strong in the later rounds. This fight is going to the cards and I think the judges might event be split. In the end, I see Sergio Pettis keeping his title and remaining Bellatorâ€™s best.

Bellator has booked a massive title fight for their bantamweight division. The promotion took to the Morning Kombat show today to announce that they had finalized a bantamweight title fight between Sergio Pettis (21-5) and Kyoji Horiguchi (29-3) for December 3rd.

This matchup will pair the Bellator champion (Pettis) against the RIZIN champion (Horiguchi). Many will recall that Horiguchi was the Bellator bantamweight champion as well when he defeated Darrion Caldwell back in 2019.

At that time, Horiguchi was already the RIZIN champion and the win over Caldwell gave him two championships. The two promotions had agreed to do a co-promotion with Horiguchi holding both titles.

However, after Horiguchi got hurt, Bellator moved on with crowning a new bantamweight champion. Juan Archuleta became the champion before ultimately losing the Bellator title to Sergio Pettis earlier this year.

Horiguchi had lost the RIZIN championship in his last fight of 2019. He returned in December of 2020 and avenged that loss while winning back that title. Now, he’s going to try and win back the Bellator title that he never lost.

Sergio Pettis has really taken off after leaving the UFC. Pettis was always touted for his skill and potential but never reached the top of the mountain in the UFC. That said, he was still able to defeat some of the best inside the octagon.

After becoming a free agent, Bellator signed Pettis to an exclusive deal. Since joining the promotion, he’s gone 3-0. The highlight of that stretch came at Bellator 258 when he took on Juan Archuleta for the bantamweight championship.

The two had a good fight, but Pettis was getting the better of things throughout. Ultimately, Pettis scored a decision win to become bantamweight champion. Now, he’s going to have his chance to defeat Horiguchi who never lost his title with Bellator.