Last week, Eddie Alvarez (30-8, 1 NC) made his third appearance under the One Championship banner. In the promotion’s debut on primetime US television, The Underground King took on Iuri Lapicus in the opening matchup.

Alvarez was looking to pickup a win that would set him up with a shot at the One lightweight championship. The Underground King has said that capturing a title in One would make him feel like the greatest lightweight of all time.

However, Alvarez is going to have to wait a little longer on that shot at the One title. Last week he was disqualified after landing several shots to the back of the head of his opponent.

Alvarez now has to sit on the sidelines and watch everything play out. One‘s lightweight champion, Christian Lee (14-3), defends his title tonight on TNT. After tonight’s fight, Lee is expected to take some time off as his wife is expecting a child.

With that, Alvarez might be on the shelf for a bit. However, he doesn’t plan on being inactive. The One lightweight is actually in ‘serious talks’ about a boxing matchup with boxing legend, Oscar De La Hoya.

Alvarez told ESPN’s Ariel Helwani that De La Hoya’s camp had reached out about boxing the One Championship lightweight. De La Hoya announced just a few weeks ago that he would be making his return to boxing.Â

Oscar De La Hoya hasn’t boxed in almost thirteen years and he is 48 years old. However, De La Hoya feels the competitive itch again and it looks like he has his eyes set on a potential matchup with an MMA fighter.

Alvarez isn’t some run of the mill fighter here. Were talking about a former UFC and Bellator lightweight champion. Had Alvarez won last week, he would be for sure challenging for the One lightweight title soon.

However, with no clarity on the One title situation and no timeline on his next bout, Alvarez is interested in the boxing matchup. Talks are still early, but according to the former MMA world champion, they are serious. This will definitely be something to watch over the coming weeks. 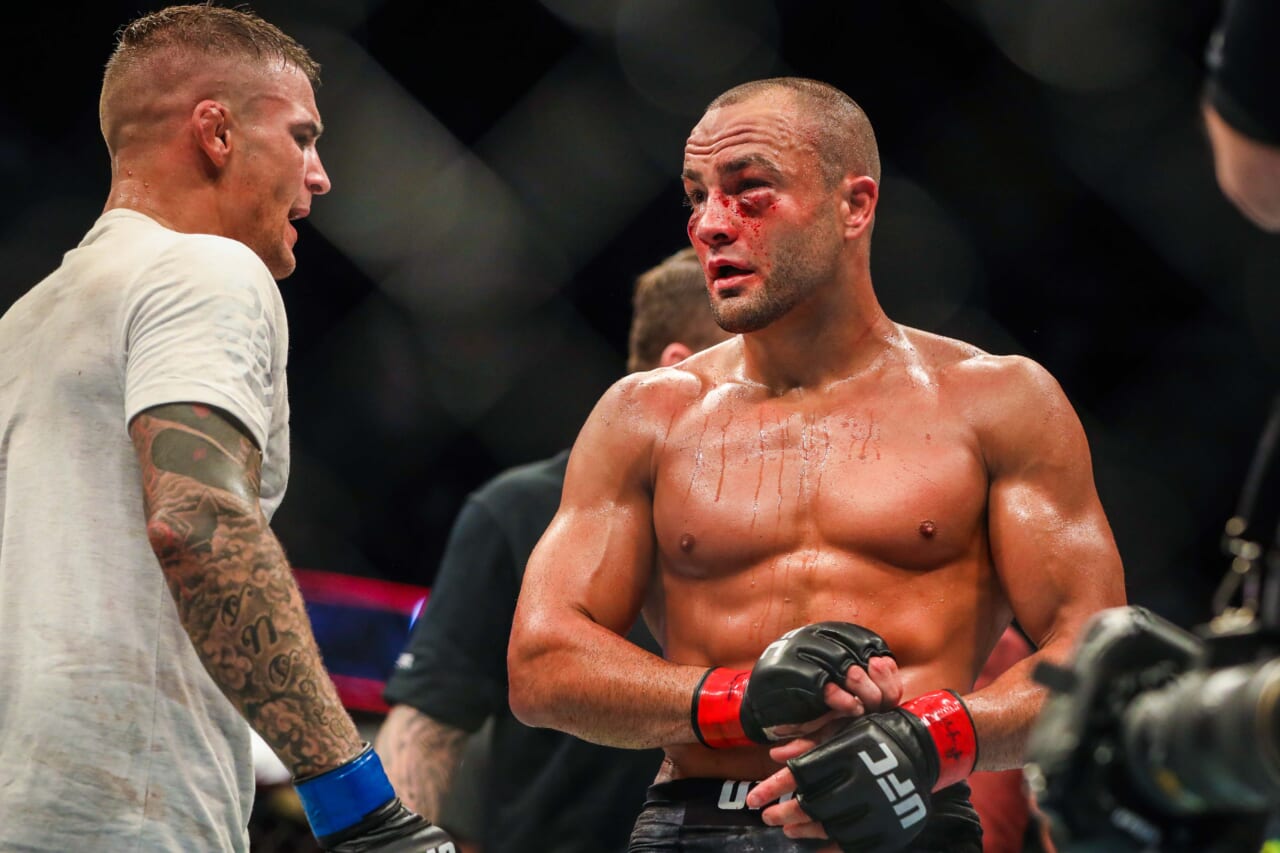 Tomorrow night, ONE Championship will make their debut on TNT. The Singapore-based MMA organization is taking a monumental step forward in having their fights broadcasted on The Turner Network.

ONE is bringing forward a big time card tomorrow night for their debut on TNT. Their main event features one of the greatest to ever do it in Demetrious Johnson, but it’s the co-main event that might steal the headlines.

In the co-main event, former UFC lightweight champion Eddie Alvarez (30-7, 1 NC) will taking on surging contender Iuri Lapicus (14-1). Lapicus suffered his first career loss in his last appearance with ONE back in October.

That night, Lapicus was stopped by Christian Lee. However, prior to that loss, the 25 year old prospect had won fourteen straight and he had finished every opponent. While he has 10 submissions, it’s his striking that could be the key at ONE on TNT 1.

It hasn’t been smooth sailing so far since Alvarez made the jump from the UFC to ONE. Alvarez was stopped in his first fight by Timofey Nastyukhin and then he won against Eduard Folayang in a fight that was an absolute war.

Lapicus is a really tough matchup for Eddie Alvarez. However, Alvarez is one of the those fighters you should never count out. I remember not giving him a chance when he fought Rafael Dos Anjos and we all know how that turned out.

For Eddie Alvarez to win at ONE on TNT 1, he has to make this fight dirty. He needs to take Lapicus to the deep waters and try to break him. If this fight is flashy and clean, I’m not sure I like his chances.

Lapicus is going to have the technique advantage on the feet. With his submission threats, I’m not sure Alvarez is going to try to take this to the ground. However, I can see Alvarez using the clinch a lot at ONE on TNT 1.

I’m looking for Eddie Alvarez to use the clinch and some dirty boxing tomorrow. However, I’m not sure it’ll be enough. This is his first fight since August of 2019 and I really don’t like the matchup. I think he’s going to get clipped tomorrow and I believe Iuri Lapicus gets the biggest win of his career at ONE on TNT 1.

Prediction: Iuri Lapicus by TKO – Round 2

MMA isn’t the easiest sport to make it in career-wise, as many fighters have found out. Many find that the sport doesn’t pay as much as an outsider might imagine, and even at the highest level, there’s concerns about fighter pay and whether or not the UFC’s practices are fair.

Few know this struggle with forging a successful career better than fighters that have been around the sport for a long time and experienced it all, and that includes former UFC wrestler Ben Askren and current ONE lightweight Eddie Alvarez.

Both of those fighters have taken to Twitter to offer advice to other current fighters about things such as taxes and money management.

Dear Fighters, Uncle Sam will take 30-50% of your money dependent on state taxes and income bracket. No one will tell you this. Plan accordingly.

The line of conversation started with Ben Askren tweeting a warning to new fighters that, depending on their state and their income, they could end up losing as much as half of their earnings just from taxes. His sentiment was added to by SBG Ireland coach John Kavanagh, most known for training former champion Conor McGregor.

Its always so traumatic when you sit with your fighter after the first time they get a decent pay day…and they learn about taxes for the first time. Like that kid crying playing the monopoly game ðŸ˜… https://t.co/7y1lfr1X4n

But current ONE Championship lightweight Eddie Alvarez, who formerly competed in the UFC’s lightweight division, also had something to add on to that. He provided a number of tips, not just on taxes but on keeping money in reserve and investing it.

Fighters ..adding to @Benaskren
1) Set up an LLC before getting youâ€™re first paycheck( this will allow you to write off most expenses )
2) Create a solid safety fund preferably 6 months
3) having 100k in youâ€™re account doesnâ€™t make you rich Do Not Ball out!
4) Save and invest

Alvarez also revealed that his own investments are spread across multiple things rather than being placed in one specific thing that could lose value.

Residential and commercial real estate mostly maybe 20 percent over all money in stocks , some bitcoin , having many lines in the water and gaining as much knowledge as possible in what you invest in Is ðŸ”‘ key

Many athletes are able to live off just their paychecks without having to worry too much about other things such as investments, but that’s not the case for most of the MMA fighters outside the top echelon of the UFC. And with the league struggling somewhat financially thanks to the loss of ticket sales at the gate in recent months, it doesn’t look like that situation will improve anytime in 2020.

With these circumstances, all fighters can do is continue to push for more attention to their cause and manage their own assets smartly.