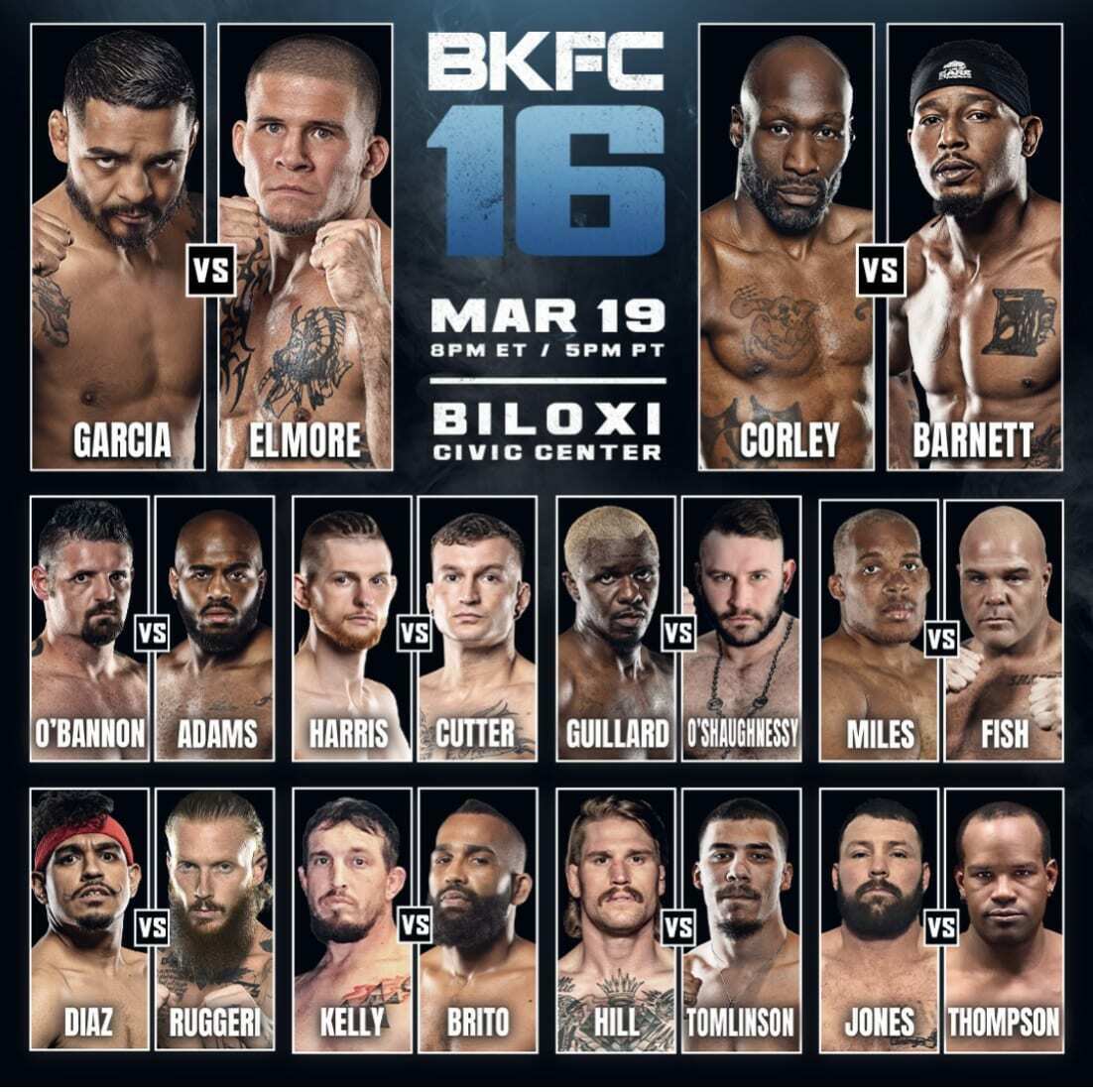 The BKFC 16, which is slated on Friday night at the Biloxi Civic Center in Biloxi, Mississippi, promises to be a fitting follow-up to the smashing success of KnuckleMania last February in Florida.

“From top to bottom this is one of the strongest cards we’ve put together,” Feldman said. “Biloxi is truly our second home with this being our seventh event in front of the supportive legion of BKFC fans there. It’s going to be a night of the world’s best bare-knuckle action inside the Civic Center and for fans watching at home on the BKFC Digital App.”

Headlining BKFC-16 is a lightweight match between veterans Leonard ‘Bad Boy’ Garcia (1-1), fighting out of Lubbock, TX, and Joe ‘The Hitman’ Elmore (2-0), of Atlanta, GA.

‘I am the legend killer’

Elmore has been on a tear, winning his first two BKFC fights. He stopped Will Chope in the first round at BKFC-11 last July, then returned two months later to pull off a unanimous decision victory over Tom Shoaff at BKFC-12. He’s hoping he could make it three in a row.

“I’m excited,” Elmore said about the shot he has been given. “I’m where I deserve to be. I’ve been fighting for this for a long time. I’ve got 40 pro fights and I’ve been the main event for about 30 of them. I just needed a promotion with the proper ability to make me shine. I told David Feldman (BKFC President), ‘it’s my talent, my hard work, and my viciousness that was designed for this sport, but it’s your platform.’ I’m just excited to have this platform and do what I’m gonna do.

While Elmore has high respect for Garcia, he vows to stop the former UFC fighter on Friday night.

“I love Leonard Garcia,” Elmore said. “I’m a huge fan of his. He’s a legend, but with all of my heart, I believe I am the legend killer. I’m coming out here to knock him out. I’ve never been dropped in 40 fights. I’m not nervous at all. I’m excited. The more I have on my shoulders, the more I’m driven with adrenaline just to fight. The big crowds don’t make me nervous. They make me happy nervous. It’s what I crave.”

After his UFC and LFC stints, Garcia made a sensational debut in bare-knuckle fighting in 2019 with a second-round knockout of Julian Lane. Garcia, however, lost his second fight later that year against Jim Alers at BKFC-7. He is hoping to bounce back against Almore.

Adams will be making his return from a long hiatus. His last fight was in August of 2019 at BKFC-7. Among his three victories include huge wins over current BKFC Heavyweight World Champion Joey Beltran and Sam Shewmaker. O’Bannon returns to the Biloxi squared circle following a memorable one-round slugfest against Shewmaker last December at BKFC-15.

Looking to bounce back

In a welterweight cross-state showdown, Melvin ‘The Young Assassin’ Guillard, (0-1), of Kenner, LA hits the squared circle against BKFC debuting Scott ‘The Irish Spartan’ O’Shaughnessy, of Slidell, LA. In his BKFC debut, Guillard suffered an unfortunate hand injury that stopped his fight against Isaac-Valle Flagg at BKFC-7 almost two years ago.

Fighting at 165lb. Forrest, MS native Kaleb ‘The Lionheart’ Harris, sporting a BKFC record of 2-3, looks to even his record against battle-tested veteran Noah Cutter of Defuniak Springs, FL.

In a bantamweight matchup of Los Angeles, CA-based BKFC fighters, David Diaz faces off against Spencer Ruggeri. Both fighters were selected from the BKFC Fighter Tryouts and will be making their promotional debuts.

Rounding out the card in the middleweight division, Louisiana’s Ryan Jones clashes with Eric ‘The Genetic Freak’ Thompson of Slidell, LA. 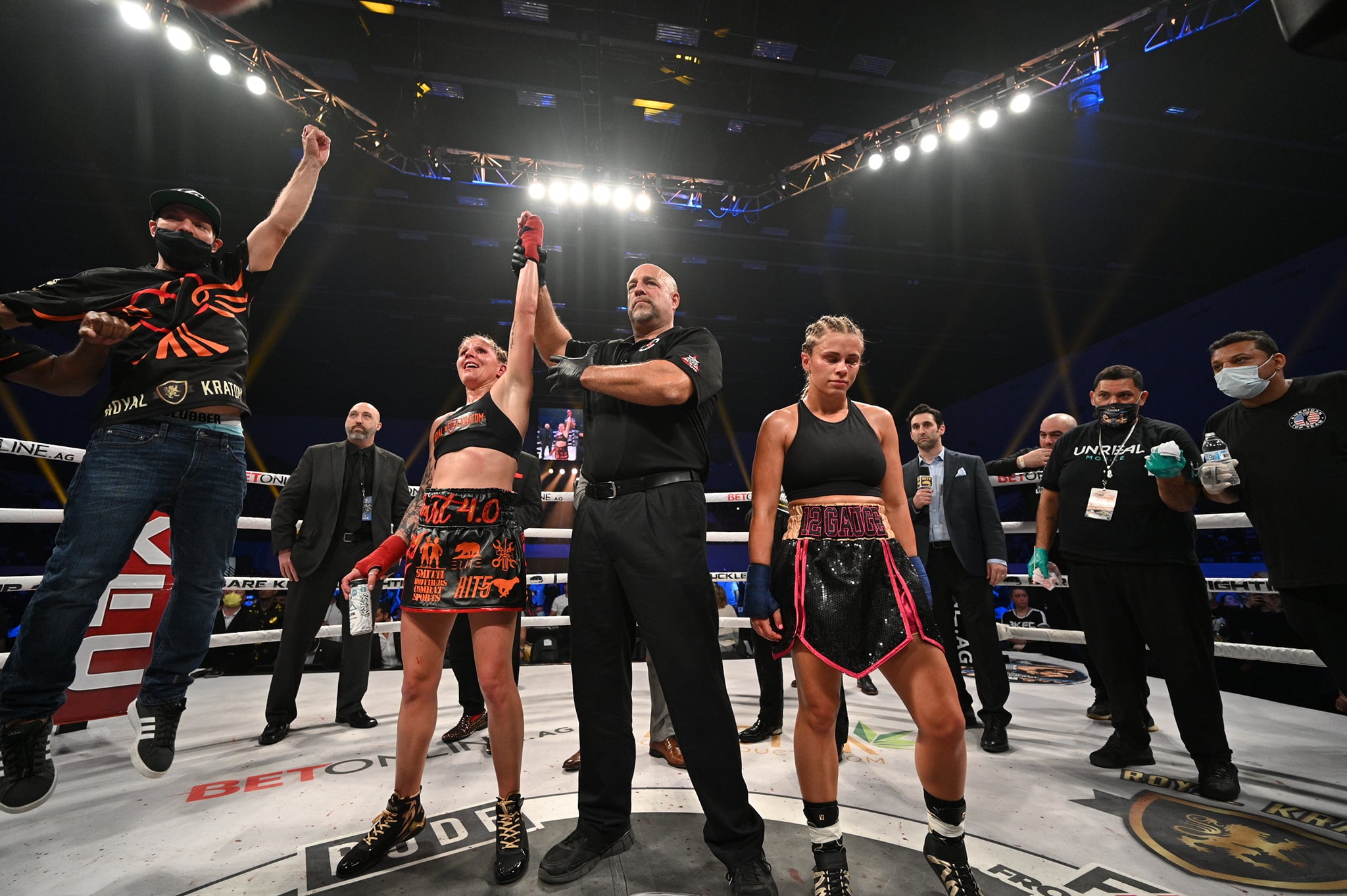