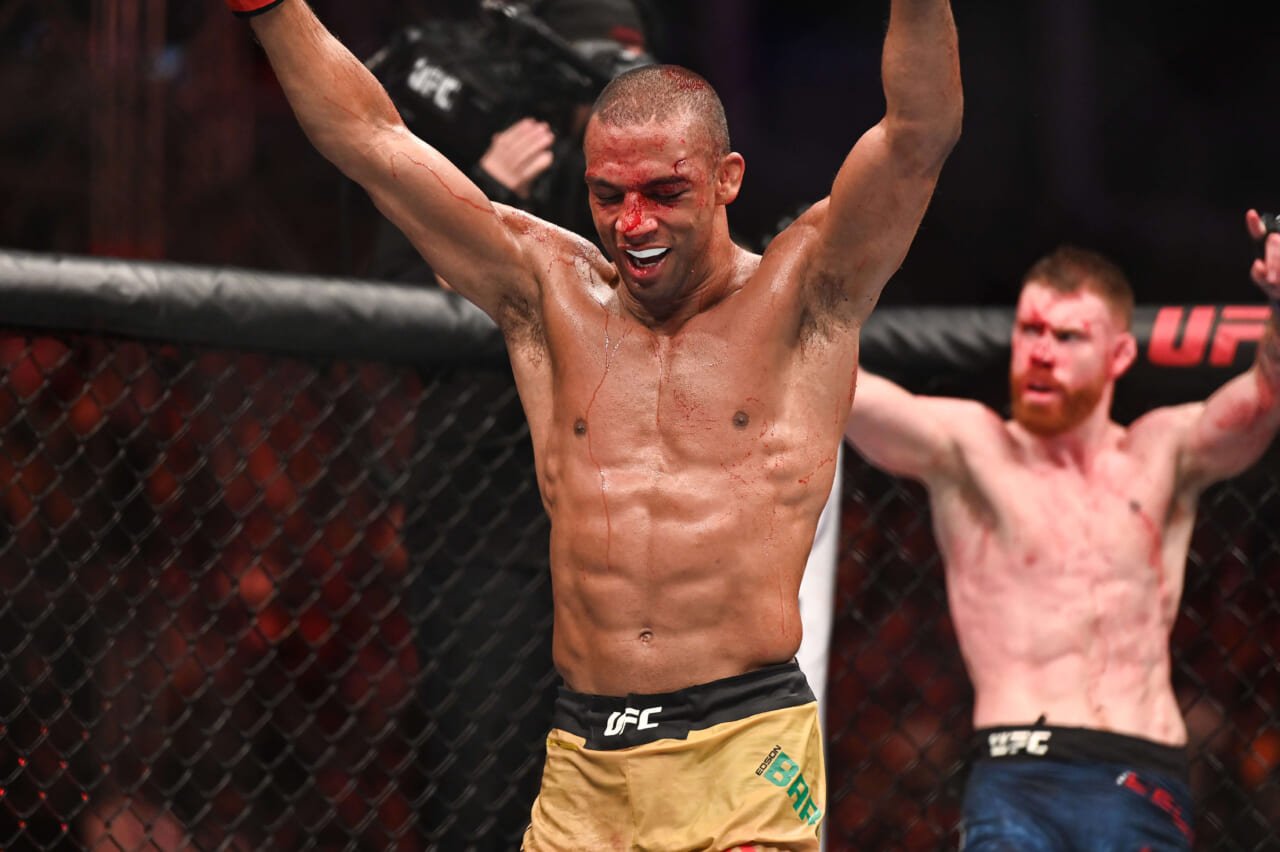 Yesterday was Thanksgiving and the UFC gave us a fun featherweight matchup to be thankful for. MMA Junkie was the first to report that the UFC had finalized a matchup between Edson Barboza (22-10) and the undefeated Bryce Mitchell (14-0).

The matchup will take place on March 5th. For Barboza, he’s going to be looking to get back in the win column after he lost his last fight. In his last fight, Baboza headlined a UFC Fight Night against Giga Chikadze.

Entering that bout, Barboza had won two fights in a row in the featherweight division. A win over Chikadze would have put the Brazilian in an excellent position. However, Barboza couldn’t find much success and was stopped in the third round.

Now, Barboza is looking to reset and the UFC isn’t doing him any favors in booking him against ‘Thug Nasty’. That said, this matchup is going to be equally challenging for Mitchell. This is your stereotypical striker versus grappler matchup.

Will Thug Nasty stay unbeaten in the UFC?

Bryce Mitchell made his UFC debut back in 2018 at the Ultimate Finale where he picked up a win. Since then, he’s gone a perfect 4-0 which includes a victory where he pulled off a twister.

Thug Nasty has a sick ground game and you can imagine that he’s going to try and get the fight with Barboza down to the mat. However, doing that might not be very easy.

In his last fight, Mitchell picked up a big decision win over Andre Fili. That was the first big step up in competition for Mitchell since he joined the UFC. Now, Mitchell is going to take another step up in facing Barboza.

It’s been over a year since we’ve seen Mitchell as he’s been recovering from some injuries. This is not an easy fight to come back to, however, Mitchell wants challenges and the UFC is willing to give them. 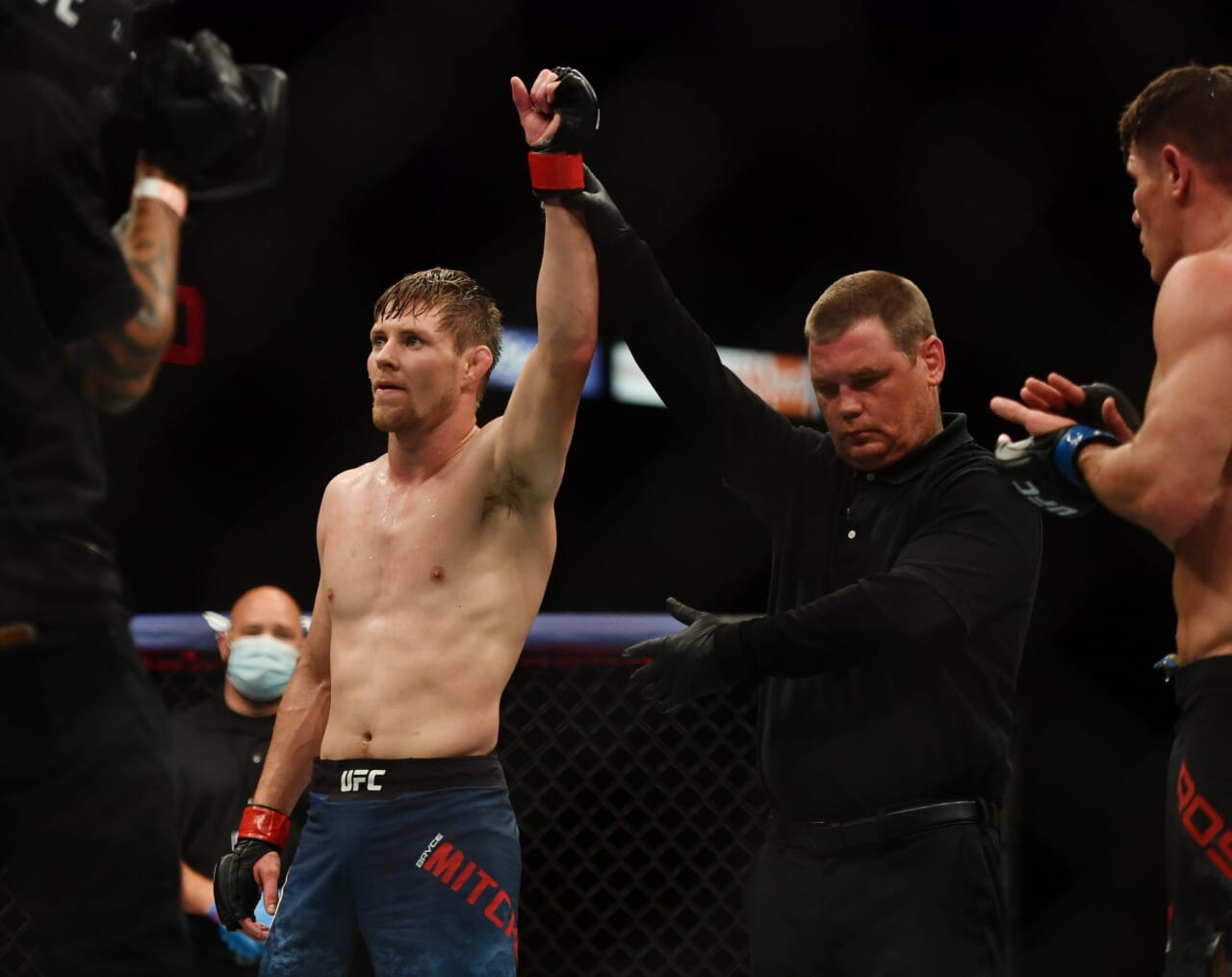 This past weekend at UFC Vegas 12, Bryce “Thug Nasty” Mitchell (14-0) took on Andre “Touchy” Fili (21-8) in the co-main event. It was a tough test for Mitchell who seems to becoming an increasingly popular figure in the UFC‘s featherweight division.

As expected, Fili proved to be one of the toughest tests of Mitchell’s career. Thug Nasty used his strong grappling to win rounds one and three decisively, but Fili had his moments which pushed Mitchell. Mitchell was not able to storm through Fili on the ground.

The takedowns were the key to the victory for Mitchell. However, his striking did look much improved on Saturday night. In fact, he actually won a lot of the striking exchanges. However, it was still his grappling that sealed with win at UFC Vegas 12.

After the fight, Mitchell revealed that he broke his left hand. He said he wasn’t sure how long he’d be out, but he did want to take a little time to recover. My guess is that it’ll be a few months before we see Thug Nasty back in a UFC cage.

Mitchell entered the cage Saturday night as the 15th ranked featherweight in the UFC. The win was his fifth with the promotion, and again, it was his toughest opponent yet. Mitchell will definitely need someone with a ranking for his next fight.

I think a fun matchup for the UFC could be a matchup with Ryan Hall. Hall is currently ranked 13th in the division and he’s a ground wizard himself. I mean he’s the only man in UFC history to submit Hall of Famer, BJ Penn.

Hall is looking for his next fight, and a matchup with Mitchell could be fun. If you love the ground game, this would be the fight for you. This might be one of the few UFC matchups where you could see Mitchell look to do more standing.

Another route the UFC could go is pairing him up with a guy like Shane Burgos. Burgos is just outside the top ten and he’s coming off of an incredible fight against Josh Emmett. This would be the more dangerous fight, but one that could lead to a big jump for Thug Nasty.

Over the last few years, Fili has fought some of the best guys in the world. He’s put together some good wins, and he’s only lost to some of the best that the division has to offer. If Mitchell could get by Fili, it would say a lot about where Thug Nasty is in the UFC‘s featherweight division.

As the UFC Vegas 12 co-main event got underway, Fili looked to work the jab. Mitchell landed a really nice leg kick to get his striking started. Thug Nasty shot in for a nice takedown in the opening minute. Fili defended well initially, but Mitchell was able to get him down.

Fili kept trying to work his way up, but every time he did, Mitchell got him back down. Halfway through the round and Mitchell started landing some good ground and pound. After Fili forced a scramble, Mitchell took him right down and landed in the mount position.

Fili did get back to his feet finally with a minute left, but was taken right back down. Dominant opening round for Thug Nasty. Mitchell opened the second round with some solid strikes. Thug Nasty was getting the better of the striking in the second.

After Fili landed a couple of additional clean shots, Mitchell shot in deep for a takedown and got it. Mitchell tried to lock up a choke from side control, but Fili defended well. Mitchell kept the fight on the ground, but a scramble allowed Fili up in the final few seconds.

Entering the final round of the UFC Vegas 12 co-main event, I had the fight one round a piece. Fili seemed fresher as the final round started. However, Mitchell landed some really clean shots to open the final frame.

Mitchell got in deep on a shot in the opening minute and took Fili down. Fili was able to work his way back up to his feet after a minute on his back, however, Mitchell took him right back down. Fili exploded into a reversal that found him on top.

Mitchell worked his way back up to his feet almost immediately. Thug Nasty landed a clean right on the feet before taking Fili right back down. Mitchell was able to work his way to the mount, however, Fili defended well. However, Fili was running out of time in this one.

As the fight entered the final minute, Mitchell started landing some clean ground and pound. Fili forced one final scramble in the last few seconds, but Mitchell took him down again before the bell. Very impressive performance from Thug Nasty who remained perfect in his UFC career.

Mitchell has started his UFC career out by winning his first four fights to continue his perfect record. In those fights it’s been Mitchell’s superior ground game that’s really been impressive. Thug Nasty even pulled off a twister back in December against Matt Sayles.

In his last contest against Charles Rosa, Mitchell showed the difference between a good grappler and an elite grappler. Rosa couldn’t do anything and Mitchell went on to win a unanimous decision. His striking isn’t that great, but his ground game is next-level.

Andre Fili always seems to be that guy that fights all the fighters with hype behind them. He fought Yair Rodriguez, Calvin Kattar, and Sodiq Yusuff all on their rises in the UFC‘s featherweight division. Fili has some losses, but only to really good competition.

When he’s not facing top guys, Fili hasn’t really lost. He has some good wins on his record like Myles Jury, Charles Jourdain, and Dennis Bermudez. Fili is good wherever the fight goes, but tomorrow you can expect that he’s going to want to keep the fight standing.

This fight is one of those ones that’s really easy to pick depending on where the fight goes. If the fight stays on the feet, I really like Fili’s chances to give Mitchell his first career loss. Fili isn’t an elite striker by any means, however, his striking is still better than Mitchell’s.

If Fili can stop the takedowns, I expect him to be able to score enough points to win on the cards. However, if Mitchell is able to land just one takedown he can end the fight. While Fili has a good ground game, they are on very different levels with their skills on the mat.

I definitely understand why Fili is a very live underdog at the moment. Again, if the fight remains standing, he’s got an excellent chance. I’m going to ride the UFC‘s hype train a little longer and say that Mitchell is able to get a takedown and a submission in this one.

The UFC is finalizing an exciting featherweight contest for their Fight Night on Halloween. Per MMA Junkie, Bryce “Thug Nasty” Mitchell (13-0) will take on Andre “Touchy” Fili (21-7) on October 31st.

This will definitely be one of the more anticipated matchups on the UFC‘s Halloween card. The card is currently scheduled to be headlined by a matchup between Anderson Silva and Uriah Hall.

One of the UFC’s brightest prospects

Thug Nasty is one of the brightest young fighters in the UFC. Mitchell has defeated all four opponents he’s faced so far in the UFC, and he even pulled off a Twister against Matt Sayles at UFC on ESPN 7.

While Mitchell is a well rounded fighter, he is known for his incredible skills on the ground. Out of his 13 professional wins, nine of them have come via submission. He’s extremely creative off of his back, and there is really never a safe moment for opponents when the fight hits the mat. Mitchell just debuted at 15th in the UFC’s featherweight rankings.

Andre Fili will be the toughest test for Bryce Mitchell so far in his UFC career. Fili has been in there with some of the better guys in the division. In his UFC career, Fili has fought guys like Yair Rodriguez, Calvin Kattar, Michael Johnson, and Sodiq Yusuff.

While Fili has lost to those four top level guys, he’s battle tested against some of the best. Despite those losses, he does hold impressive wins over Myles Jury, Dennis Bermudez, and Charles Jourdain. Fili is extremely well rounded and he will pose some interested challenges for Mitchell.

This is a fantastic matchup in the UFC‘s featherweight division. If Mitchell is able to get through Fili, it will say a lot about his potential moving forward. If Fili is able to stop the hype train, it will be his second win in a row, and it might warrant a top ten opponent.