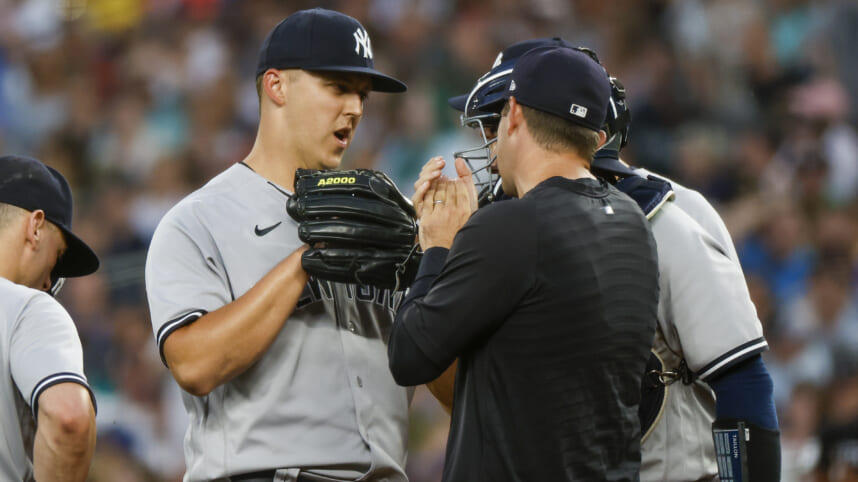 The New York Yankees are escaping injury by the skin of their teeth lately, with starting pitcher Jameson Taillon taking a line drive off his right forearm during Tuesday win over the Los Angeles Angels.

Magneuris Sierra drilled Taillon, who immediately began holding his arm in pain but continued pitching before manager Aaron Boone plucked him out of the game in the second inning.

Taillon gave up two hits and two earned runs, striking out two batters over 33 pitches before exiting. Luckily, after the game, he indicated that it was just a bit of swelling, which worried the veteran pitcher at first.

“I was a little worried at first with the swelling and pain,’’ Taillon said. “I caught a nice break for once in my career.”

The Yankees have gotten a polarizing version of Jameson Taillon this season:

In the month of August, Taillon hosts a 4.83 ERA, giving up 17 earned runs over 31.2 innings. It is safe to say that the 30-year-old pitcher won’t be utilized in the postseason, given his inefficiency in the rotation.

Taillon also struggles significantly in the first inning of games, meaning the Yankees won’t utilize him as a relief pitcher out of the bullpen. Specifically, he features a 4.85 ERA with 14 earned runs allowed in the first inning this season over 26 total innings.

It is nice to see that Jamison‘s numbers have improved slightly across the board compared to his 2021 season, the first coming off Tommy John surgery. He still isn’t offering top-end production, but he was never brought in to be that type of starter.

He primarily utilizes a 4-seam fastball, slider, curveball, and cutter. He also throws in a sinker and change-up every now and then. However, he’s relied far less on his FB this season, seeing a tremendous drop from 49.5% usage to 35.3%.

With Luis Severino and Nestor Cortes both on the injured list right now, the Yankees can’t afford to lose another starter. Luckily, Taillon seems to be doing just fine but might miss his next start as a precaution to allow the swelling to dissipate.