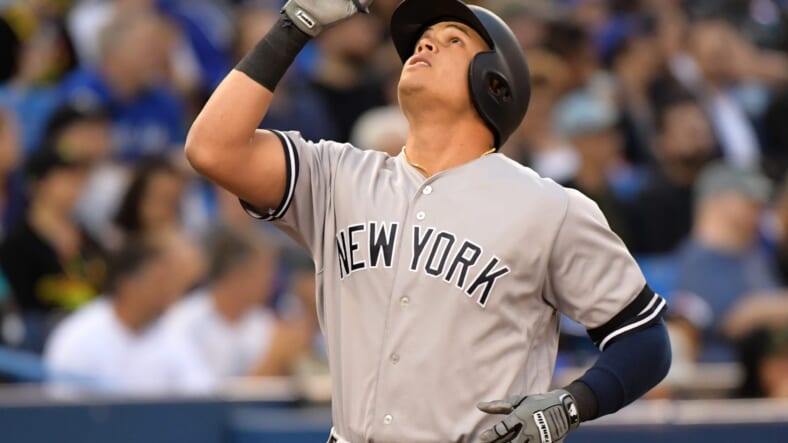 Going into the postseason, no one knows what the New York Yankees budget will be to solve some of the club’s problems. In a postseason news conference, General Operating Partner Hal Steinbrenner said that the club had lost a monstrous amount of money this season. The Yankees didn’t have a single paying fan in the stands throughout the 60 game season. They also lost all of their concession revenues. Without that revenue coming in, they still had to pay for ground crews, security, and a myriad of other expenses.Â  They did get a break in paying the players’ full salaries, but that saving pales compared to the losses.

With these huge losses, it is questionable how much money the Yankees will have to pay another ace type starter, building up the bullpen and solving the shortstop problem. Steinbrenner has not tipped his hat as to what the Yankees might do or not do.

The has been a lot of foolish talk about trading our Gold Glove type 3rd baseman Gio Urshela. Andy Martino of SNY.tv Martino explained that the best path to improve the Yankeesâ€™ infield defense would be trading Gio Urshela. Others have also chimed in on the same idea. This writer believes that you don’t solve a problem by getting rid of a player that is a clutch hitter with a .298 batting average and a .992 fielding percentage.

Mark Teixeira, the former Yankee first baseman, has suggested that the Yankees trade off Luke Voit while his value is highest. He suggests the move will solve the problem of moving Gleyber Torres to his natural position at 2nd base, thus moving DJ LeMahieu to first base. I have a lot of respect for Teixeira, but this is another brainless suggestion. You don’t get rid of a player that is just showing his immense promise. This year he hit .277 with a team and baseball leading 22 home runs and 52 RBI’s. Those stats translate into a regular-season of 60 home runs, just one short of Roger Maris’s Yankee record and 140 RBI’s. The bottom line is that you don’t get rid of your lineup power to save the job of a sub-par player.

There is no question that the New York Yankees have some pitching deficiencies, and they are about to worsen. Masahiro Tanaka, James Paxton, and J.A. Happ have all reached free agency. The Yankees need a co-ace to be number two behind last season’s signing of Gerrit Cole. None of these pitchers that are at free agency is that number two starter. The Yankees prospects also can’t fill that position, except possibly Deivi Garcia, but he too is unproven. The answer is that the Yankees first have to get that co-ace. The most likely person available is Trevor Bauer.Â  After that decision is made, the Yankees can then look at their free agents and decide who to keep.

Other than signing a premium starting pitcher, the New York Yankees must re-sign DJ LeMahieu. These two moves are a necessity. DJ has been with the Yankees for two years and has been everything the Yankees could have wanted, and much more. Last year he batted .327 with 26 home runs and was the only player with over 100 RBI’s. He also won the coveted Silver Slugger Award while playing excellent defense at 2nd base. This year, he won the baseball batting title, being the first player to win both leagues’ title. This year he also hit .364 at age 32, with no signs of slowing down. The Yankees will have to pay him at least 50% more, or more likely near twice what he earned in his present contract. Because of his age, the new contract will probably be limited to four years. Whatever they do, they must nail LeMahieu down for the next few years.

The Yankees need to solve the shortstop situation

There is no question that Gleyber Torres is not the ideal player to have at short. He, this year, had the second-most errors at the position. The obvious move if the Yankees choose to keep him is to move him to his natural position at 2nd base and replace him with Didi Gregorious, who we know can play at Yankee Stadium or go out and spend big bucks for Franciso Lindor.Â  This, like any other move, causes additional problems. What to do with DJ LeMahieu.

Under my plan, there are certain issues, but I put it forth anyway. Move Torres to second and make DJ LeMahieu a utility player. He has proven he can play all of the infield positions equally well. This would keep DJ in the lineup most days as he filled in at all four infield positions; he could also be an occasional DH. Should any infielder become injured, there will be an automatic replacement. I know this is not an ideal plan, but there is no easy solution to the Torres problem.

Yankee owner Hal Steinbrenner expressed his support of Aroldis Chapman, even though he has thrown the losing pitch two seasons in a row. He stated that he is “extremely comfortable,” giving him the ball with victory at hand. Aaron Boone also echoed the same support. This writer is never comfortable with the Chapman on the mound when the score is tied or with only a one-run lead. Chapman is not Mariano Rivera. Even in his saves, he often struggles and keeps fans on pins and needles. The previous Baltimore closer, Zack Britton, saved 8 games in a row while Chapman was out with the coronavirus.

New York Yankees need to beef up the bullpen

The two hot arms in the bullpen this year were Chad Green and Zack Britton. Outside of those two, there isn’t much dependability. Jonathan Holder was off and on, and Adam Ottavino faded this season just like he did last year. The only difference is that he became undependable much sooner this year than last.Â  The other dependable arm is Tommy Kahnle, but he had Tommy John surgery, and likely won’t be back to the team until the All-Star break at the earliest. The Yankees need another good arm to strengthen their bullpen. The Yankees might consider Daren O’Day, who has the lowest ERA of 1.10 of any free agent; he would also be a cheap purchase. There are 18 free agents on the market.

MLB announces the best 2020 umpire of the year

The Yankees fans surely know the names of Angel Hernandez and CB Buckner, both of which have cost the Yankees runs and much drama with managers and coaches being thrown out of games when they became upset by the erroneous calls of these two umpires. They are, without a doubt, the two worst umpires in baseball.

If the worst needs to be named, then so does the best. Pat Hoberg has been named the best and most accurate umpire of the 2020 season.