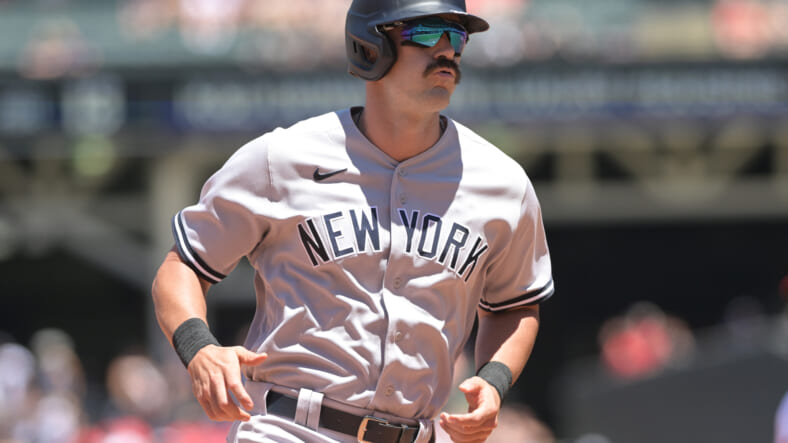 One of the New York Yankees’ biggest surprises this season has been veteran lefty, Matt Carpenter. Carpenter bats left but throws right, providing the necessary power to take advantage of the short right porch in Yankee Stadium.

Just a few months ago, Carpenter was fighting for an opportunity with the Texas Rangers Triple-A affiliate, but the Yankees spotted him from afar. Desperately seeking an opportunity to showcase his refined swing at the big league level, general manager Brian Cashman decided to give him a chance.

Carpenter had embarked on a journey this past off-season to fix his swing after struggling to put things together during his final two years with the St. Louis Cardinals. He hit just .169 with a 30% on base rate over 130 games last year, but he’s arguably having one of his best offensive stretches ever this year over 26 games.

Carpenter is hitting .344 with a 44.7% on base rate, .859 slugging percentage, 26% strikeout rate, and 13% walk rate. He’s tallied 10 homers and 22 RBIs. To showcase just how fantastic his slugging metrics have been, he’s currently tied with Joey Gallo in the home run department in 45 fewer games. Yes, Carpenter has been phenomenal, but Gallo has just been astronomically bad.

The Carpenter show is just getting started:

On Tuesday night against the Cincinnati Reds, the Yankees lost Aaron Hicks to a bone contusion in his right shin. This could keep him out for several weeks.

There is more pressure on Cashman to make a move at the deadline now for an outfielder, but Carpenter is more than capable of filling in if need be. He’s made two appearances in left field this season, enjoying 12 innings of action. The Yankees have ripped the Band-Aid off Carpenter and allowed him to be a bit more versatile with his defensive contributions. The injury to Hicks will open up more opportunities for him, which is exactly what he is seeking.

“I’ve always been open to playing wherever,’’ Carpenter said several days ago. “There was a time [in my career] I moved almost every year.”

“I was an All-Star at second base in 2013 and they asked me to move to third the very next year,” Carpenter said. “So I moved to third then to first.”

Nonetheless, if Carp continues to produce at this level, the Yankees will have no choice but to include him in their October plans.