New York Yankees Weekend Roundup: All the Yankee news/rumors in one place 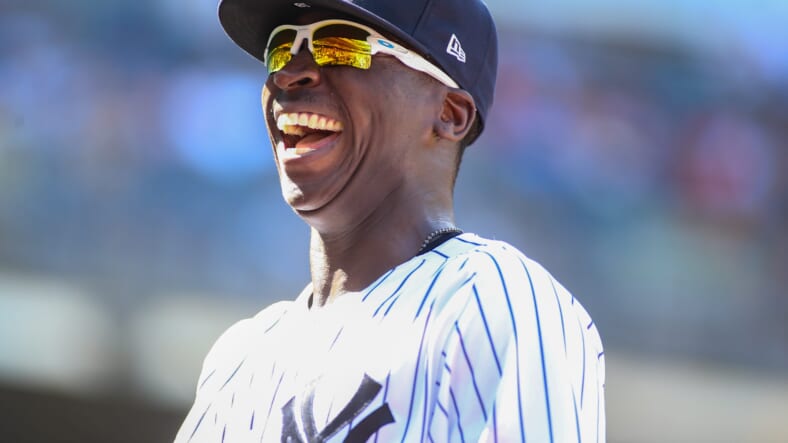 The New York Yankees are on the sidelines watching the World Series after an early exit from the postseason. The Tampa Bay Rays did a number on the Yankees this season. First, they became Yankee nemesis beating them eight out of ten meetings. Then they took the division from them by 7 games, and finally, beat them 3 games to 2 in the ALCS. The Rays then advanced and beat the Astros to go to the World Series. Since the Yankee exit, they have been busy looking at improving the team before the new season, creating lots of Yankee News and Rumors. Each segment is marked either fact or rumor.

Will the Yankees try to re-sign Didi Gregorius?

With the poor 2020 performance of Gleyber Torres, there is much talk about putting him back at second base, his natural position, and getting a new shortstop. Many say the Yankees should go after the high-priced Franciso Lindor, who would be a dramatic upgrade at shortstop and add a left-hand hitter to the right-hand heavy lineup. Lindor is a switch hitter.Â  The likelihood of that happening is remote with the Yankees being short on cash after a no fans in the stands season.

There is also talk in baseball circles that the Yankees could re-sign fan favorite Didi Gregorius. Gregorious was not offered a contract extension at the end of 2019. He signed a one-year contract with Joe Girardi’s Philadelphia Phillies, where he had a great comeback season. Didi is now a free agent again. With his excellent season hitting .284 with 10 homers, 40 RBIs, and posting a .827 OPS, he finds himself with several suitors.

The Phillies would like to re-sign him. The New York Yankees and the Los Angeles Angels both have questions at short and are likely suitors. Although Gregorius thanked the Yankees for his time with the team, he did feel let down when they did not re-sign him.Â  Whether that will keep him from being a Yankees again is unknown. He recently said that he has faith in Torres and see him as the future Yankee shortstop.

Torres only hit .243 and has made 25 errors at short since Didi. Torres could still be a Yankee star as he hit 38 home runs in 2019. I could be that his lack of performance at short also affected his hitting. In the coming week, the Yankees will have a virtual meeting to decide what to do with catcher Gary Sanchez. You can bet that Torres will be on the agenda as well. Rumor.

The Rawlings Sporting Goods Company has released its 2020 Gold Glove finalist. Among them are the New York Yankees third baseman Gio Urshela who continued his excellent play for the Yankees this year. In somewhat of a surprise, they also gave the nod to right-fielder Clint Frazier for his dynamic play at right. It really shouldn’t be a surprise as Frazier is the most improved Yankee player.Â  Urshela has a shot at winning the award, but not so much for Frazier because Joey Gallo has a wide margin lead. Fact.

Derek Jeter, after leaving baseball, said that he would like to own a baseball team. He made that a reality when he bought in on the Miami Marlins, where he is the chief operating officer. One of the first things he did was hire Jorge Posada as a consultant. Jeter has now hired Scranton’s Railriders pitching and hitting coach Tommy Phelps and Phil Plantier, who would have been the Triple-A team’s pitching coach. The Yankees now have more voids to fill. Fact.

Gerrit Cole and Masahiro have become quite friendly this season. Tanaka has been very active on social media of late especially thanking the Yankees and fans for his years with the Yankees. This would seem to indicate that he may not be returning. He has offered in the past that he might finish out his career back at his Japanese home. He was recently seen on social media at a Starbucks. Tanaka and his wife, Cole and his wife, had a double date to share sushi together. Fact/Rumor

Hal Steinbrenner tips his hat on ifÂ  Boone will be Yankee manager.

You can put this question to rest. General Operating Partner Hal Steinbrenner has made it clear in a recent interview that Aaron Boone will be his field manager in 2021. Fact.

Jasson Domingo avoiding all the noise

There is much hype about Yankees prospect Jasson Domingo as one of the best signings since Aaron Judge. Meanwhile, Domingo avoids the hype as he continues to work out and improve his game in the Dominican Republic. Dominguez, 17, is the teamâ€™s highest-rated prospect, according to Baseball America and MLB Pipeline. Scouts have said that he ignores the hype, but he wants to be the best player in baseball. There is a possibility that Jasson could hit the minors this upcoming season. Fact.

Will Domingo German pitch for the New York Yankees in 2021?

Many Yankee fans wonder if the Yankees 2019 best performing pitcher Domingo German will return to the team next season after completing his suspension for domestic violence. This was recently put in question when Owner Hall Steinbrenner said he would have to show that he is a changed man, in order to return. German is adamant that he will be on the Yankee roster next year. Fact.

Surprise targets the Yankees may go after in Free Agency.

It’s obvious, that the New York Yankee would love to acquire ace pitcher Trevor Bauer, catcher J.T. Realmuto, and shortstop Francisco Lindor, but most likely the money they will require will prevent that.Â  Cashman and the Yankees may surprise many and instead, go after some not suspected targets.

The Yankees will concentrate most of their energy and money on improving their pitching. Here are a few that might surprise you as being targets. The Yankees may look to LHP Justin Wilson. He can pitch in the Big Apple after being with the Mets. He had a 2.54 ERA over 45 appearances and finishing nine games. Another possibility if they don’t resign Zack Britton is RHP Alex Colome has been Chicagoâ€™s closer since they acquired him in 2019, and heâ€™s had a ton of success with 30 saves that year and 12 this season. He has a career 2.95 ERA.

The Yankees will also try to beef up the starting rotation; it will take a lot of money to bring Trevor Bauer to the Bronx; the Yankees may look to Taijuan Walker, who they looked at before the trade deadline. After posting a 1.37 ERA with the Jays in six starts and a 2.70 ERA total over 11 starts this season, the 28-year-old is someone the Yankees could certainly get back on their radar. Rumor.

Instead of the expensive J. T. Realmuto, the Yankees may go after C James McCann who is a solid two-way catcher that has good framing rates and a bat that is above-average. He slashed .289/.360/.536 with seven homers and 15 RBI in 31 games during the shortened 2020 season.

Many think that the Yankees pitches should be faulted for their demise in the season and postseason, and there is a good reason for that. But the powerful Yankees lineup also failed at times and for long stretches. Last offseason the Yankees replaced their pitching coach with Matt Blake. There are now rumors that they may be looking to replace Marcus Thames, who has been the Yankee hitting coach for the last four years.

General Manager Cashman has said he doesn’t anticipate any coaching changes this offseason. But his hand may be forced to replace Thames. It is widely reported that Thames is on the shortlist to be the new Detroit Tigers manager.Â  If that happens, Cash may promote P.J. Pilittere to the position, if not he will look outside the organization. Rumor.