New York Yankees Recap: Homers are king as Yankees win over the Orioles 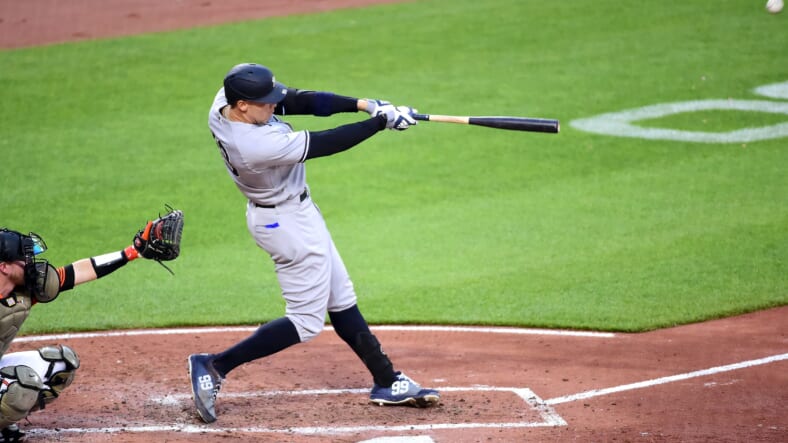 The New York Yankees entered a three-game series with the Baltimore Orioles tonight at Camden Yards in Baltimore. After a win against the Minnesota Twins last night, the Yankees hoped to continue with another win tonight. The Yankees had a dramatic come-from-behind win, and that same energy was hoped to propel them to another winning streak against the Orioles, who will lose at least 110 games this season. Gerrit Cole was on the mound for the Yankees and Alexander Wells for the Orioles. The Yankees homered their way to a 7-2 win over the Orioles.

DJ LeMahieu led off the first with Wells on the mound and singled to left. Aaron Judge hit a two-run homer for his 34th of the year. Anthoney Rizzo singled to center. Giancarlo Stanton struck out swinging. Luke Voit lined out to short. Joey Gallo flew out to left, but the Yankees picked up two runs in the half. At the bottom, Cedrick Mullins faced Cole and doubled to the left-field wall. Ryan Mountcastle popped out to first. Anthony Santander ground out, but Mullins advanced. Trey Mancini, with two outs and a man on third, walked. Austin Hays walked to load the bases. Ramon Urias struck out to get Cole out of a bases-loaded jam. New York Yankees 2 Orioles 0.

At the top of the second inning, Gleyber Torres stuck out. Gio Urshela singled to right. Gary Sanchez flew out to right-center. Higashioka ground out to second. LeMahieu flew out to Mullins. At the bottom, Pedro Severino ground out. Pat Valaika ground out. The bottom was scoreless off of Cole. New York Yankees 2 Orioles 0.

In the third inning, Stanton, with one on, hit a two-run homer to left. Luke Voit followed him with a homer of his own, a solo shot for his 10th of the season. At the bottom, the Baltimore Orioles remained scoreless. New York Yankees 5 Orioles 0.

Stanton, against new pitcher Erick Handhold in the fifth inning, singled up the middle. Voit ground out for a double play to left. . Joey Gallo ground out to center. Cole at the bottom faced Valaika, who got a single in front of Stanton in left. Gutierrez popped out to center. Mullins went down swinging. Mountcastle doubled down the left-field line to drive in Valaika, getting the Baltimore Orioles on the scoreboard. Santander walked on Cole’s 103rdd pitch. Stewart, with two on and two outs, stuck out to end the inning. New York Yankees 5 Orioles 1.

The sixth inning was led off by Gleyber Torres, who ground out to short. Urshela singled up the middle. Higashioka singled to right field. LeMahieu hit into a double play to end the half. Austin Hays led off the bottom against new Yankee pitcher Michael King and walked. Urias singled. Hay made second on a double bobble from Torres and Urshela. With two on and no outs, Severino hit into the double play with Hays moving to third. Valaika flew out to Stanton in left to keep the Orioles scoreless in the sixth. Yankees, 5 Orioles 1.

Aaron Judge led off the seventh inning by walking. Rizzo hit into a double play. Stanton walked. Brett Gardner was brought in to pinch-run for Stanton. Voit struck out on the 10th pitch at-bat. At the bottom, Gutierrez flew out to Gardner in left. Mullins lined out directly to Judge. Mountcastle went down swinging. Yankees 5 Orioles 1.

The eighth inning was led off by Joey Gallo, who homered to right-center. Torres gound out. Urshela flew out to right field. Higashioka flew out to left field to end the half. Anthony Santander led off the bottom by flying out to a running Aaron Judge in right. Stewart flew out to Gardner in left field. Hays struck out looking for a 1-2-3 inning for Michael King. Yankees 6 Orioles 1.

DJ LeMahieu led off the ninth inning for the Yankees and homered into the left-field stands. Judge ground out to third. Rizzo singled up the middle. After taking over for Stanton at left, Brett Gardner flew out to the warning track at center in his first at-bat. Voit flew out to right-center to end the half, but the Yankees picked up another run. At the bottom, with the last licks on the line, Urias facing Sal Romano foul tipped into Higashioka’s glove. Austin Wynns singled to right. Valaika walked. Gutierrez singled off Romano’s bare hand with two on and one out as Wynns scored, knocking Romano out of the game with an injured finger. Aroldis Chapman came in to face Mullins with one out and two on; he struck out. A wild pitch advanced the runners. Mountcastle struck out swinging.

The final score was the New York Yankees 7 and the Baltimore Orioles 6. The winning pitcher was Gerrit Cole, and the loser was Alexander Wells.