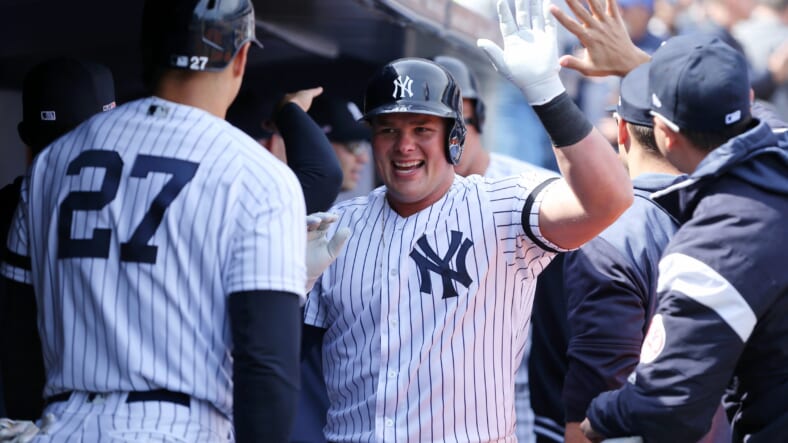 The New York Yankees are coming off another disappointing season where they lost again in the ALCS. The Yankees haven’t won a World Series since 2009.Â  The Yankee brass and the Yankee fans alike are tired of not winning and waiting for that elusive 28th World Championship. After this short season, when the Tampa Bay Rays beat the pants off the Yankees, the talk about changing up the team so they can win is far more active than ever.

Trade talks suggestions are going on for many New York Yankees players, from scouts to former Yankee players. However, no one is talking at this point about trading Miguel Andujar, a player that they really have no use for and should be traded.Â  Trade talks include Luke Voit, Gio Urshela, Gary Sanchez, Adam Ottavino, and more. All of this in the shadow of the nine Yankee players who have become free agents.Â  According to how you look at it, next seasons Yankee team could look very different, or the Yankees will continue to believe that they have a great team, and it will improve in a normal 162 game season that may have fans in the stands.

The idea behind trading off Luke Voit is that he is at his highest value ever.Â  By dumping some of the free-agent pitchers, James Paxton and J.A. Happ, that saving and saving from trading off Voit, would give the Yankees the funds to go out and go out get a premium number two starter like Trevor Bauer.Â  In his prime, Bauer seems to be willing to take a short one or two year contract for big bucks. The short contract might be something the Yankees would be interested in, as long as Gerrit Cole approves.Â  Cole and Bauer have had a feud for years.

The Gio Urshela trade rumors are brought about by the idea that getting rid of a great player to save a poor player’s job just doesn’t make sense at all but is gaining interest. The idea is to move the poor playing shortstop, Gleyber Torres, to his natural position. But doing that knocks the baseball batting champion off of second base. By trading off Urshela, whose value is high right now, they can move DJ to third base. For this writer, this is the worst trade the Yankees could make.Â  The fact is that DJ’s fielding percentage in his eleven games at 3rd base was worse than Torres’s fielding percentage at short.

The Adam Ottavino trade rumor makes sense for the New York Yankees. Ottavino is a good relief pitcher, but he has failed two years in a row for the Yankees by losing gas when it is most important, at the end of the season. Ottavino might be able to return to the pitcher he was with new scenery. The problem with moving Ottavino is his big salary. To make it happen it is likely that the Yankees would have to absorb part of his salary for the next two years.

The Gary Sanchez problem is complicated. The New York Yankees have been supporting him and putting him on a pedestal for several years as their catcher of the future.Â  But this year there was a sign that that support has developed some big cracks in it as he was sat down as the season wanned, and for several games in the postseason, in favor of backup catcher Kyle Higashioka who has become Gerrit Cole’s personal catcher. Cole is going to be around for 9 years, so Higgy might be as well.

But there is a problem with Higashioka taking the main catching role, that would move Sanchez to back up. Sanchez is due a big raise in arbitration this year. He will make somewhere between $6-8M and that’s too much to spend for a backup catcher. The answer is to trade him to some team that sees his home run power as a plus. Sanchez hasn’t been good for the Yankees since 2017, and this year was his worst, hitting .147 with regressing defense.

The Yankees could then go out and get a real catcher like J.T. Realmuto, whose lead leading batting average and excellent defense would make him a perfect fit for the Yankees. But it would cost dollars to get J.T. But the Realmuto, Higashioka catching twosome certainly is interesting.

Among the other trade, rumors include bringing back Didi Gregorius that the Yankees let walk in the last postseason, causing the Gleyber Torres problem. Did had a great season with the Phillies, hitting .284 with 10 home runs. So the Yankees have all these trade opportunities to consider along with what to do with all the free agents. It should be an exciting postseason as the Yankees try to improve the team so they can win another Championship.