How Yankees’ Jordan Montgomery is putting together another successful season 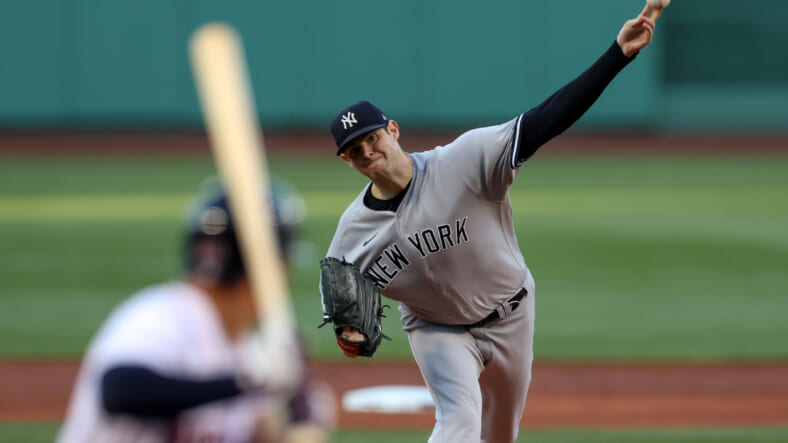 Yankees left-handed starter Jordan Montgomery is one of my favorite pitchers in baseball. His incredible effort in the 2020 ALDS to extend the series to a 5th decisive game, his strong 2021 campaign, and now in 2022, another good season.

After a strong start in 2022, where he had a 2.72 ERA through his first 13 starts, he hit a skid in his next two starts that would balloon his ERA to 3.27. This wasn’t entirely unexpected, with underlying metrics such as FIP and SIERA suggesting he doesn’t get enough strikeouts to sustain a sub-3 ERA.

This was a perplexing case because, despite a high whiff rate and high chase rate, batters just didn’t strike out versus Monty. His K% regressed from his 2020-2021 totals, but now in the month of July, it seems Montgomery is finding his strikeouts stuff once again, and it’s because of improved pitch selection.

Struggling To Put Batters Away

Jordan Montgomery, from the months of April to June, had the 7th highest Swinging Strike rate in baseball (13.8%). This was less than 1% lower than Gerrit Cole (14.7%) and the same as Carlos Rodon’s swinging strike rate. In terms of how often they got batters to chase? Montgomery’s 36.0% Out Of Zone Swing rate was 0.1% lower than Cole and 0.6% lower than Rodon. Their K% numbers, however?:

How does this make any sense? He gets whiffs and chases similarly to both and yet strikes out 12% fewer batters? Well, this stems from how Montgomery attacked batters in two-strike counts.

With a 22.5% Put Away rate, 0° Launch Angle Against (meaning a ton of groundballs), and mere .220 wOBA against, batters have not been able to find success against this pitch late in counts. We’ll get back to his sinker later, but it was clear he needed to change how he attacked batters in these strikeout counts to find greater success.

Changing How He Uses His Changeup

Instead of using his changeup as a heavy strikeout pitch, he’s began to use it as a pitch to generate whiffs early in counts and set up two strike counts. In July, his changeup usage went from 25.8%-28.2% in the months of April-June to just 14.0%. He’s instead gone to his sinker and curveball, and while his sinker doesn’t generate whiffs, it gets a ton of called strikes. This isn’t to say his changeup can’t be a pitch he uses in 2 strike counts, rather that he won’t use it nearly as much. Whether this is Jordan Montgomery making the adjustment or the Yankees calling pitches differently, it’s worked.

Again, his changeup is still a great pitch. It pulls the string on batters since it mirrors his sinker beautifully. It’s got great results, it’s just not coming in those crucial swing and miss counts, but his sinker is stepping up in a big way.

Against the Astros, he displayed his sinker’s ability to generate strikeouts, with 5 of his 8 strikeouts coming on his sinker. This is because he’s throwing his sinker much harder in two-strike counts, sitting at 94.5 MPH in July on 2 strike counts versus 93.7 in counts as a whole in July. He dials it up a bit, and that makes sense; save your best velocity to hunt a big strikeout.

“Stuff” is what you refer to typically when discussing how good a pitcher’s velocity and movement is, and of course, velocity is a huge factor. Throwing harder typically is a good thing, and with Montgomery using some extra velocity in those counts can mean he’s able to give batters the chair more effectively. This reflects in his K%, striking out 25.5% of batters faced in July (29th) versus just 18.7% of batters in the first three months of the season (51st).

Jordan Montgomery Can Be the Yankees’ Three Starter

The Yankees are heavily involved in the Luis Castillo market. It’s clear that they see this team as one who’s a good #2 starter away from winning it all. That being said, winning a World Series takes more than two great starters. A good third starter can change a series, and Jordan Montgomery is starting to show flashes of being that.

If his July trend continues, his K% could go up to 24-25% over the next few months. His BB% and GB% are already remarkable, and that K% is truly the final piece to the puzzle. If the Yankees could get a 18% K-BB% and 45% GB% from Montgomery, they’d get one of the 30 best starters in baseball. So far, Jordan Montgomery has proven to be a good starter, but now he has to prove he can be an elite third starter. He’s roughly 13th-15th in ERA and peripheral stats in the American League, but now it’s all about cracking that top 10.