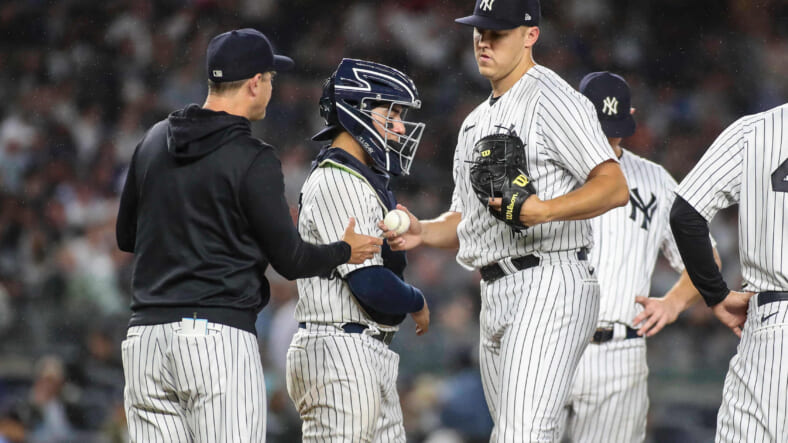 The Yankees’ starting pitching has been their biggest flaw lately, with Jameson Taillon having a tumultuous third consecutive outing.

Good news and bad news as Yankees drop a toughy against Pirates:

Jamison Taillon features a 3.63 ERA on the season over 89.1 innings pitched. While his numbers still remain solid, he has struggled considerably over the last three outings. Against the Houston Astros on June 23, he allowed 10 hits and six earned runs over 5.2 innings.

Against Oakland on June 29, he gave up three earned runs over seven hits, tossing 101 pitches. However, things didn’t get much better against the Pittsburgh Pirates on Tuesday night, allowing five earned runs on six hits over 5.1 innings.

Taillon is seemingly healthy and has been consistent with his pitches, but opposing teams are simply performing much better the last few weeks. Jameson isn’t known for his strikeouts, so offenses may just be taking more pitches and tiring him out quicker, forcing him to make mistakes.

Offensively, the Yankees finished with 10 hits and nine strikeouts. Gleyber Torres looked solid, elevating his average to .257, tallying two hits and a walk in the loss. Isiah Kiner-Falefa had one of his more productive games this season, recording three hits, including a double to left-field and two singles.

The Pirates were able to get the majority of their production from home runs. They recorded a solo homer in the 2nd courtesy of Daniel Vogelbach and a two-run shot from Jack Suwinski in the 4th inning.

The Yankees will turn around on Wednesday with Luis Severino on the mound before embarking on a four-game series in Boston starting Thursday. Hopefully, they are able to walk away with a win against one of baseball’s more underwhelming teams, featuring Mitch Keller on the mound, who has a 5.14 ERA this season over 70 innings pitched.

Prior to Tuesday’s game, Yankees’ first baseman Anthony Rizzo was scratched from the lineup due to a lower back injury (stiffness). The injury is expected to be minor.