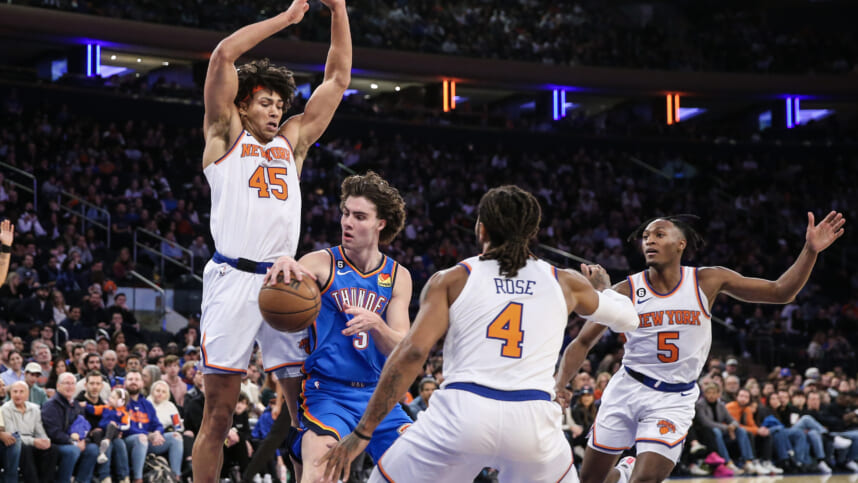 Rose is coming off a 13-point, three-assist production off the bench in a season-high 17 minutes in the Knicks’ first win in Denver in 16 years. Quickley, on the other hand, put the clamps on Jamal Murray in the final possession — the latest proof of his growth as the team’s best perimeter defender in the backcourt with Quentin Grimes out of the rotation.

But their future with the team suddenly became uncertain as their names came up in trade rumors.

SNY’s Ian Begley reported last week that teams had touched base with the Knicks to inquire about Quickley. Shams Charania of The Athletic confirmed that Friday but also included the 34-year-old Rose as another Knicks player to keep an eye on.

“The Knicks have shown a willingness to discuss Derrick Rose and Immanuel Quickley in trade talks, league sources say, as a way to sort out the team’s glut at the guard position over the course of the season.”

Shams Charania via The Athletic

The arrival of Jalen Brunson in the offseason has shrunk Rose’s role and shut the tiny opening Quickley might have had to earn a more prominent role.

Rose is averaging 6.7 points and 2.3 assists in 13.5 minutes, the fewest playing time he’s had when healthy throughout his injury-riddled career, which led him to remark he’s in the unknown earlier this month.

Rose is essentially on an expiring contract with his salary next season as a team option, making him an attractive piece for teams that do not want long-term salary or in need of a veteran guard to help their playoff push this season.

Quickley made strides toward the end of last season, but his deteriorating outside shot — from 38.9 percent to 29.3 percent this season has not helped his case. While his defense is improving, he’s too streaky to become a reliable starter.

The Knicks recently picked up his fourth-year option, making him extension-eligible next summer.

Currently, Quickley is averaging 8.9 points on a 38/29/80 shooting split — all career lows. But he’s also made a big jump in the rebounding department, averaging a career-high 4.8 rebounds to go with 3.3 assists in 22 minutes off the bench.

Quickley was reportedly part of the Knicks’ final offer in the failed Donovan Mitchell trade with the Utah Jazz in the offseason.

The Knicks are reportedly seeking draft assets in return, per SNY, which aligns with their plan to free up the backcourt logjam.

Moving Rose and Quickley for picks would mean Grimes and Evan Fournier, if he is not traded, will return to the regular rotation. Miles McBride could also get a shot.