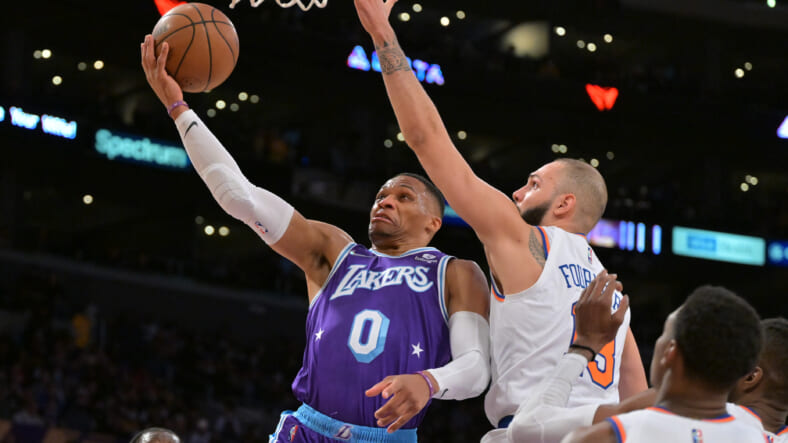 If the New York Knicks land Donovan Mitchell, their path to flexibility is to move on from Julius Randle.

The Knicks are expected to explore shedding Randle’s $117 million, four-year contract to open up another max slot for another star to pair with Mitchell.

“One league source advised me in Las Vegas to keep an eye on the Knicks and Lakers discussing a potential Westbrook deal if — IF — Leon Rose can successfully bring Donovan Mitchell to Madison Square Garden,” NBA insider Marc Stein wrote in his Substack newsletter Monday.

“The source’s thinking: After adding Mitchell, New York would be expected to explore scenarios to trade away Julius Randle. And Randle, just one season removed from his breakthrough to All-Star and All-NBA status, is presumably the sort of player that the Lakers would have to consider taking on if — IF — they are unable to use Westbrook’s $47.1 million expiring contract in a trade for Kyrie Irving.”

Randle played his first four years with the Lakers and looked solid in the one season he spent with Anthony Davis in New Orleans before coming to New York. While Randle and LeBron James play the same position, what makes the idea of a Randle-Lakers reunion plausible is the uncertainty of James’ future with the team.

James could become a free agent next summer if he does not sign a two-year contract extension. The soon-to-be 38-year-old James has openly said in the past that he wants to play with his son Bronny, who is eligible to apply for the 2024 NBA Draft.

Playing behind more established stars in a new, but in a way, also a familiar environment could reinvigorate Randle and bounce back from a forgettable season following his All-NBA selection the year before.

His fit next to two ball-dominant guards Mitchell and Jalen Brunson is questionable, raising the possibility that his tantrums last season could again loom large over next season.

Westbrook is in the same boat with Randle.

The Lakers guard has been constantly linked to trade rumors following a disastrous first season with his hometown team. However, the Lakers’ priority is to use Westbrook in a deal that would land them Brooklyn Nets’ disgruntled star Kyrie Irving. But the roadblocks — the Nets’ preference to trade first Kevin Durant before Irving and a third team to absorb Westbrook’s expiring salary — could force the Lakers to pivot.

A straight Randle-Westbrook swap is not possible and would require additional salaries from the Knicks. Whoever is left between Evan Fournier (owed $18 million next season) and Derrick Rose (owed $14.5 million next season) after landing Mitchell could be the player going to the Lakers with Randle in the hypothetical Westbrook trade.

Westbrook parted ways with his long-time agent Thad Foucher of the Wasserman Group over irreconcilable differences. Foucher advised Westbrook “to stay with the Lakers and embrace the starting role and support that Darvin Ham publicly offered.”

“Now, with a possibility of a fourth trade in four years, the marketplace is telling the Lakers they must add additional value with Russell in any trade scenario. And even then, such a trade may require Russell to immediately move on from the new team via buyout,” Foucher said in a statement to ESPN.

Foucher is the same agent who negotiated Mitchell Robinson’s $60 million, four-year extension with the Knicks.

Moving on from Randle will also open up cap room for RJ Barrett’s extension.

The Knicks could build around Mitchell, Jalen Brunson, Obi Toppin (if he’s not included in the Mitchell trade) and Mitchell Robinson to contend and possibly attract another star.

But first things first, the Knicks need to land Mitchell.