Donovan Mitchell Sweepstakes: Knicks not giving up everything, Heat scouring for extra picks 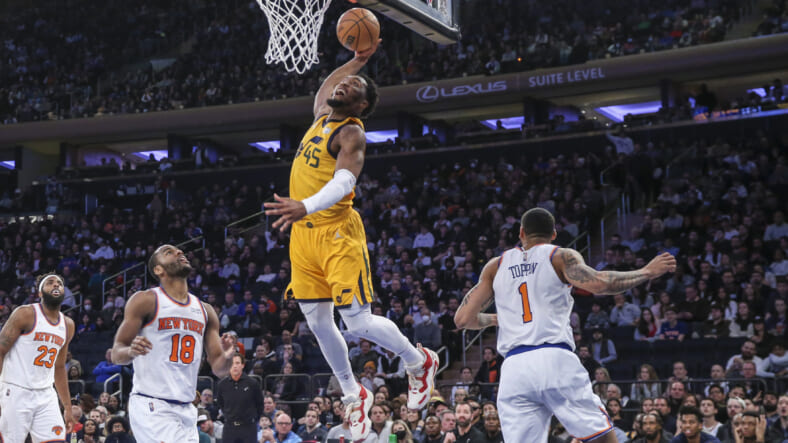 After getting a sense of what the New York Knicks are willing to offer, the Utah Jazz are reportedly gauging Donovan Mitchell’s market around the league.

This development and Deandre Ayton’s return to the Phoenix Suns have given Miami Heat some hope to get back in the Mitchell or Kevin Durant sweepstakes.

“The perpetually title-or-bust Heat, not surprisingly, are all-in on scouring the league to try to manufacture extra first-round picks to boost their chances of completing a trade for Durant or Utah’s Donovan Mitchell,” NBA insider Marc Stein wrote in his Substack newsletter Monday.

The Knicks have the extra picks that the Jazz covet. But the negotiations between Utah and New York stalled after initial talks last week where the Knicks reportedly presented options to the Jazz.

“If you’re the Jazz, ‘I want the players and I want the picks.’ That’s where it starts.”

The Jazz reportedly have Quentin Grimes on top of their wish list along with their other young players not named RJ Barrett. Utah’s reluctance to acquire Barrett is because the former third overall pick is up for an extension. The Jazz prefer flexibility — draft capital and players on rookie deals — to kickstart their rebuild.

“I think for the Jazz, they go out now around the league and see what else is out there for Donovan Mitchell. Get a sense of what the market is, what teams are willing to do,” Wojnarowski added.

“I think the Knicks and the Jazz will re-engage here at some point. Maybe it’s this week. Maybe it’s next week. Maybe it’s in two or three weeks. The Jazz are not necessarily going to move quickly. The Rudy Gobert talks… that was over a period of time this summer and once Minnesota stepped up with the package they did, that was an easy deal for the Jazz to do.”

But unlike the Timberwolves, who overpaid for Gobert, the Knicks are unwilling to sell the farm for Mitchell, who they view as the star that will attract other stars to come and play in New York.

“New York is motivated. They’re motivated to get Donovan Mitchell, but I think they’re also motivated to not just give up everything to get him,” Wojnarowski said. “They’ve got four of their own unprotected first-round picks.”

“Now, people talk about seven or eight picks. I think a lot of those picks are conditional protected picks that are coming from places like Detroit and Washington. I don’t think the Jazz value those the way they do New York’s unprotected picks.”

The Knicks can trade eight first-round picks — four of their own and four from other teams they acquired via trade — but they want to save some of them in pursuit of another star to partner with Mitchell down the road.