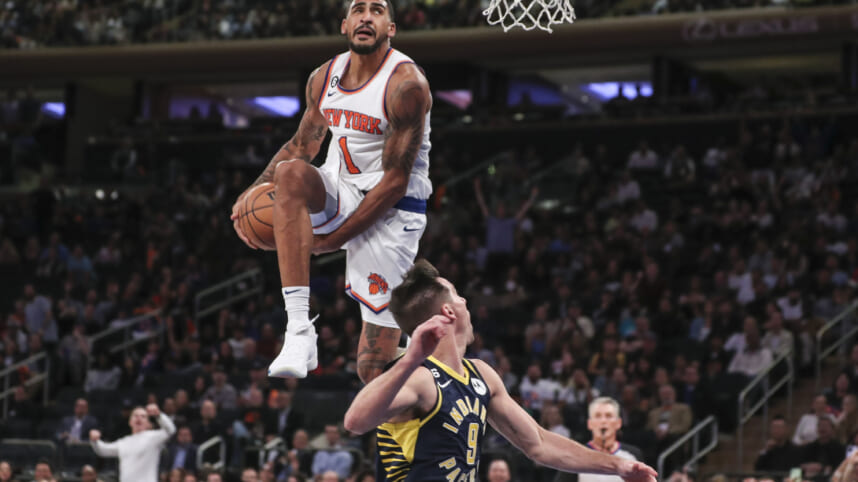 The New York Knicks Big 3 set the tone in the first half then their bench mob took over to finish the job.

Immanuel Quickley and Obi Toppin teamed up in a scintillating second half as the Knicks ran away to a 131-114 win over Indiana Pacers Friday night in front of a raucous 16,510 fans at the Garden.

It was the Knicks’ second straight blowout win against rebuilding teams.

RJ Barrett, Jalen Brunson, and Julius Randle combined for 24 of the Knicks’ 46-point explosion in the second quarter as they sat on a 72-54 halftime lead. But the Pacers came storming back in the third quarter, cutting the Knicks’ lead to eight, 93-85. That’s when Quickley and Toppin’ chemistry restored order.

Quickley hit a pull-up three-pointer, then fed Toppin for a breakaway slam.

The Knicks led by 15 after three quarters and the Pacers never seriously threatened again.

Brunson, Randle, and Barrett also played off each other, combining for 11 assists as the ball moved around again. New York logged 25 assists after dishing out 27 against Detroit last Tuesday.

“That sets the tone for the [ball] movement like that. To me, the number one job of the point guard is to control and manage the game so it keeps us organized. And then it’s the unselfishness of everybody. Every guy makes plays and when the ball comes up quickly and we wish we can create movement off off the pace.”

Brunson only shot 4 of 12 from the field but he more than made up for it by going perfect 9 of 9 from the free throw line. Randle mirrored Brunson’s game, making only 4 of 11 shots but he also made a living at the stripes (6 of 7). Barrett hit his first four three-pointers and finished with 18 points.

But it was Toppin who electrified the Garden with a game-high 24 points on an array of Slam Dunk Contest-worthy highlights, including a between-the-leg windmill dunk. He had 14 in the second half.

“He brings life and everything… Defensively, he’s working hard at it. There’s still a ways to go but he’s made great strides. I think he and [Quickley] have great chemistry together and I think that’s a big plus so there’s a lot of positives.”

Meanwhile, Cam Reddish started in place of veteran Evan Fournier (rest) while Quentin Grimes was still out with a sore left foot. Reddish struggled again with his shot (1 of 7), but he was a plus-15 in the game.

Mitchell Robinson also dominated with a near double-double (10 points, nine rebounds) in under 19 minutes of play.

Tyrese Haliburton paced the Pacers with 20 points and seven assists.

The two teams will have a rematch on Wednesday at Indianapolis.