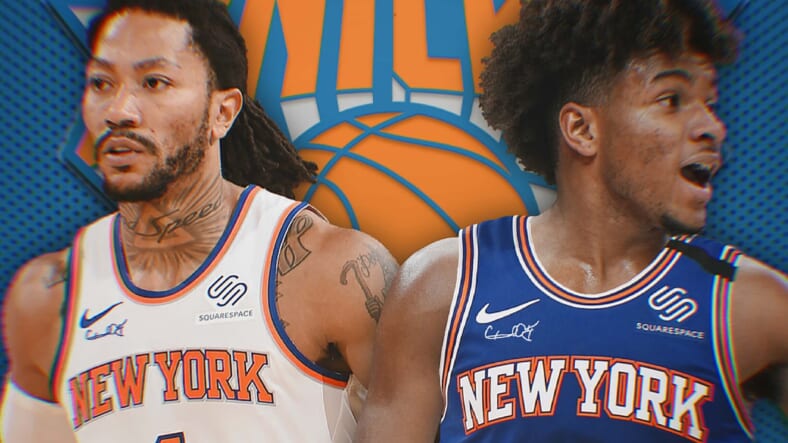 Derrick Rose had a quiet return on his 34th birthday during the New York Knicks‘ 117-96 preseason win over the Detroit Pistons Tuesday night at the Garden.

The veteran guard tallied three points, one rebound and an assist in just six minutes of play after a nine-month hiatus following his seventh surgery since his MVP season in 2011.

His lone field goal — a three-pointer — was part of the Knicks’ 13-0 run at the start of the second quarter that blew the game wide open.

Perhaps Tom Thibodeau was being cautious and easing him in. But Miles McBride’s stellar play made it an easy decision for Rose’s long-time coach.

McBride, buried in the rotation last season, came out sharp, especially on defense. He stole some playing time from Rose with a game-high six steals that helped the Knicks run the breaks.

New York’s defense made Detroit uncomfortable on offense leading to 31 fastbreak points and 26 points off the Pistons’ 21 turnovers.

“The more experience you get, you know your opponent a lot better. The guys are going, but [McBride’s] gift is his defense, physicality competitiveness anticipation. Seeing things early. The ball pressure from [Quickley] and Deuce (McBride) really got us into the open floor. And that gave us a big spark and the beauty of those guys is they can play together and it speeds up the game. I thought Derrick [Rose] gave us really good minutes in the minutes he had as well. But those those guys, they go at it every day.”

McBride was all over the floor. He was hustle personified with six deflections and contested five shots.

The second-year guard also scored seven points, punctuating the win with a breakaway slam, and collected four rebounds, two assists (plus two screen assist points) and one block as Thibodeau rewarded his defensive effort with 22 minutes of playing time. Though Thibodeau hinted that he would tighten the rotation as the season opener nears.

Yeah [Rose’s minutes were by design]. I wasn’t quite sure, but I wanted to get more minutes for Deuce (McBride) too. So I know where [Rose’s condition] is so [his playing time] get increased as we go forward.”

If McBride continues his solid play in the next three preseason games, it may serve the Knicks well to preserve Rose for the long haul.