Derrick Rose turns 34, looks to bloom once more for Knicks 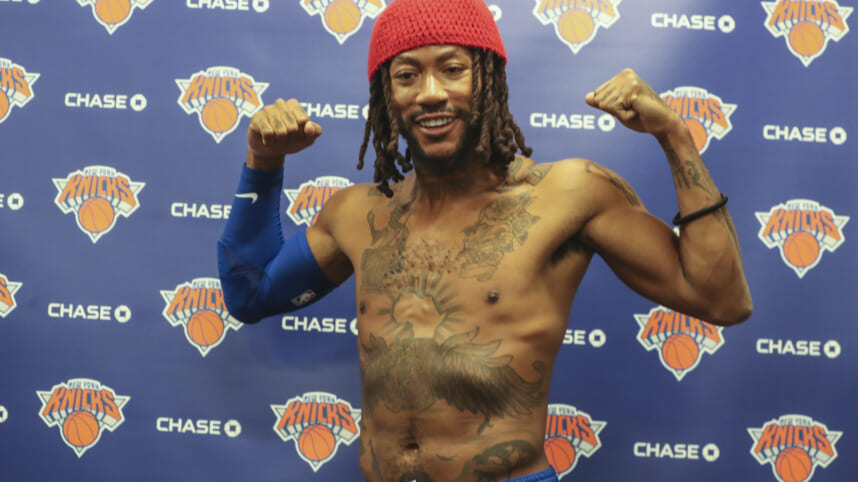 New York Knicks backup guard Derrick Rose has been at his lightest since his rookie year. After 14 seasons and seven surgeries since his MVP year in 2011, Rose is determined to bloom once more rather than wither into retirement.

Rose turns 34 Tuesday and is expected to return on the court for the first time in nine months as the Knicks face the Detroit Pistons at Madison Square Garden.

“I’m super excited, but at the same time, I’ve been injured so much that it’s kind of like another pause and like go.”

Rose hasn’t played more than 60 games since his first stint in New York in 2017, the start of his decline, before bouncing back to stay in the game in the last few years.

“Typically, when people come from injury like they put you in scenarios 1 on 0, 1 on 1, 2 on 2, 3 on 3, all the type of stuff, but I like just jumping back into the game. The [Knicks medical] staff was kind of nervous the first time or the second time I was here because it’s kind of unusual but I feel like I’m a gamer like I’ll figure it out. It’s not like I’m running 100 miles an hour like I used to but I tailored my game to like what it is now, trying to keep people off my body and I’m shooting a lot.”

Rose’s shot diet has evolved since he burst into the league as one of the most lethal rim attackers. Now, 33.3 percent of his shot attempts come from the long distance. Five years ago, he refused to shoot more threes and averaged only 0.9 attempts per game in his first go-round with the Knicks.

In 26 games last season, Rose shot 40 percent from the three-point zone on 3.5 attempts.

Rose returns 20 pounds lighter than last year in his latest attempt to stay healthy. The Knicks are set to play a more uptempo game as they deliberately went younger. Rose, now the most seasoned veteran on the Knicks roster after the departure of one of his beloved teammates, Taj Gibson, is expected to reprise his role as the second unit leader.

Depth remains to be the Knicks’ strongest suit. They wrestled with giving up that depth for a bona fide All-Star in Donovan Mitchell. But in the end, Leon Rose preserved their depth and even referred to Derrick as the ‘heart and soul’ of the 2021 Knicks playoff team.

“I wouldn’t say I was the heart and soul, but I wanted to win. I can say that. I think what this year’s all about is accountability. Like being able to not get in your feelings or taking it personal when somebody comes over and gives you constructive criticism. As a man and as a professional, you’re supposed to understand that. Talk s–t back to each other or you get mad, but you leave it on the court after practice or after that game or after that moment so it doesn’t prolong itself.”

Rose’s value to the Knicks was magnified in his absence last season. He was the Knicks’ best player in the Atlanta playoff series just two years ago. And last season, the Knicks couldn’t replicate their incredible fourth seed run without Rose.

This offseason, Rose committed to a strict diet at the behest of Thibodeau to become more available on the floor and not just a veteran leader in the locker room.

It was his response to his coach’s challenge and, hopefully, a lasting solution to his long-standing health concerns.

If Rose is healthy, he will be a calming presence on the floor to a team in disarray for much of last season.