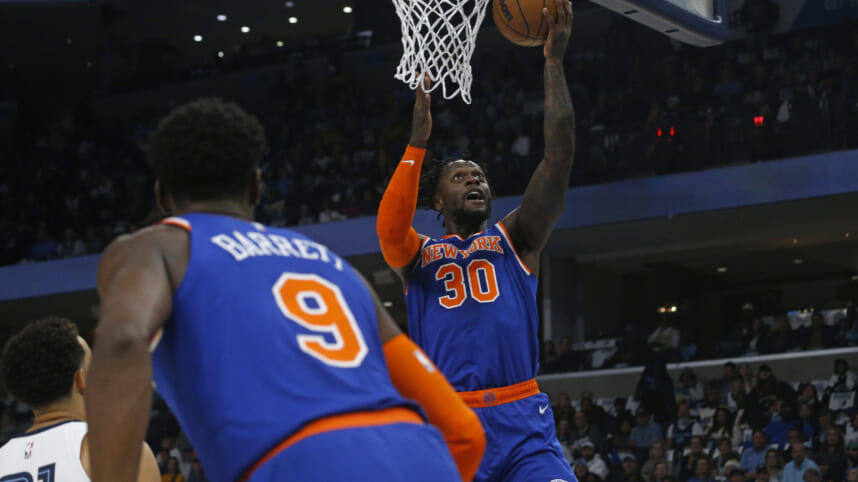 Julius Randle has been playing with a different verve this season that helped the New York Knicks get off to a 2-1 start.

There is a night and day difference from his dispirited play last season.

Taking a page out of Eurobasket’s playbook, Randle is constantly moving without the ball and pushing the pace.

Through three games, Randle remains the Knicks’ leading scorer (21.3) and rebounder (9.7). But the biggest difference lies in his efficiency and how he gets his points.

His 51.1 shooting percentage marks his highest since arriving in New York. Is it sustainable? It looks like it is based on his commitment to embracing the uptempo style of play Tom Thibodeau has installed this season.

Last season, Randle pulled up 40.3 percent of the time with only a 34.6 percent success rate. Three games into this season, there is a noticeable difference in his shot diet. His signature pull-up jump shot has dropped to 23.4 percent frequency but has become more efficient (45.5 percent).

Randle dug deep from his pocket on Monday night to power the Knicks’ second straight win. His season-high 25 points included a couple of floaters never before seen in New York before.

“[Randle] just continues to add to his game. That’s what we’re talking about his versatility. We’ve seen the running on the floor, we’ve seen the three, we’ve seen when he attacks the basket, it puts a lot of pressure on a defense. We’re talking about the floater versus the traditional mid range shot and I like that shot a lot better because I think he pulled bodies off of people. So if you miss it, we got a good chance of getting an offensive rebound off that.

The Knicks are the second-best offensive-rebounding team in the league, averaging 15.7 per game, just a shade behind Utah Jazz’s 15.8.

Randle has mostly played with a center next to him. Isaiah Hartenstein is the team’s leading offensive rebounder with 5.0 per game, followed by starting center Mitchell Robinson’s 3.7. Randle is third with 2.3 of his team-leading 9.7 rebounds per game.

Jalen Brunson’s arrival has undoubtedly helped Randle. But a big part of his renaissance is Randle’s commitment to adapt after the rest of the league, taking a cue from the Knicks’ playoff loss to Atlanta, had figured him out last season.

“[Randle] is always been a very gifted offensive player. I think two years ago, obviously he had a great year and a big part of that I think was his shooting that opened up a lot of things for him. But then the league sort of caught on, and now I think he’s caught up to what they were doing. So he’s doing a lot of different things now and that diversity has really helped him and it’s helped us. You can’t key in on him like they’re used to and when he plays like that, we’re hard to guard.”

Just as when everybody thought Randle’s ceiling had topped out during his All-NBA Second Team run two years ago, he’s found a way to kick another gear that, if sustained, can help the Knicks return to the playoffs.