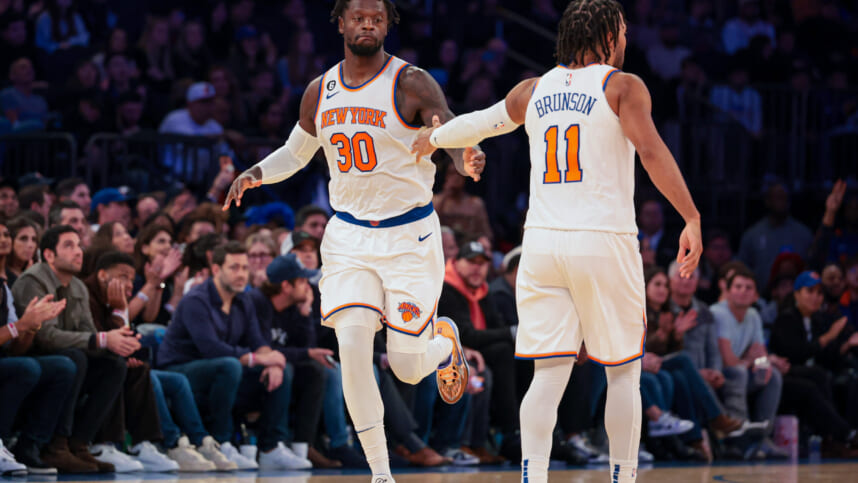 Randle scored a season-high 25 points on another efficient shooting night, going 10 of 19 from the floor, to pace the Knicks in the 115-102 victory Monday night at the Garden.

It was their second straight win in a light three-game home stand before a seven-game stretch against playoff-caliber teams.

The Magic, behind No. 1 pick Paolo Banchero and Bol Bol’s career night, gave the Knicks a big scare in the second half. But Brunson steered the Knicks to the victory with his poise and gutsy plays.

After the Magic wiped out the Knicks’ lead early in the third quarter and Brunson picked up his fourth foul, New York coach Tom Thibodeau kept his floor general in the game.

His gamble paid off.

Brunson responded to the challenge with a seven-point outburst that kicked off a 27-12 highlight-filled windup to open up a 14-point Knicks lead.

But the pesky Magic refused to fold up quickly, and they threatened anew in the fourth quarter.

A Wendell Carter, Jr. putback dunk cut the Knicks’ lead to six, 104-98, with 4:25 left. Brunson again bailed the Knicks out of trouble by completing a three-point play in the next possession.

Brunson’s leadership and poise have been the biggest difference this season for the Knicks, who typically folded up when the goings got tough last season.

“You can’t say enough about what Jalen (Brunson) does for the team. He’s just in complete control at all times. You hit some tough spots in the game and he has just such a strong demeanor and strong face, and it’s one of determination. It gives your team belief that we can do this, we can play well and we can get out of this.”

Brunson has not only provided the stability they sorely lacked in the past but also lightened up Randle’s burden.

Randle racked up his second double-double by adding 12 rebounds and four assists. He’s shooting 50 percent through the first three games.

“Julius (Randle) was terrific from start to finish. I love the way he’s diversifying his game, like running the floor. Sometimes, he’s the pace guy — he’ll push it up and create movement. Sometimes, he just beats people down the floor. [Randle] getting easy baskets is huge for us. It puts a lot of pressure on the defense.”

Showing up in the training camp in great shape, a much leaner Randle has embraced the Knicks’ uptempo style.

In a marquee matchup of power forwards, Randle took Banchero to school.

Orlando’s top rookie scored 15 points in the opening half but was held to only six after the break. Bol Bol added 19 for the Magic, who are winless in four starts.

Despite his foul troubles, Brunson still ended up with 21 points and six assists in 33 minutes.

RJ Barrett rebounded from a poor first half (1 of 9 from the field) to finish with 20 points and a game-high plus-22 rating.

Five players scored in double figures for the Knicks, who are playing unselfish basketball.

After finishing in the bottom in assists (21.9) last season, the Knicks are currently tied for 10th with 27.7 after three games.

And it’s all because of Randle redeeming and reinventing himself and Brunson’s leadership.

On Wednesday, the Knicks will be looking to win three in a row against the depleted Charlotte Hornets.