Euro version of Julius Randle is a boon to the Knicks 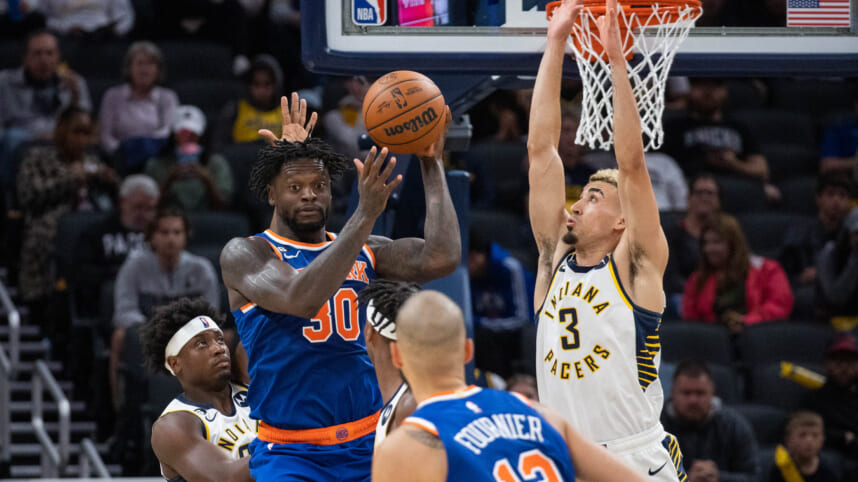 This version of Julius Randle is just what the doctor has ordered for the New York Knicks.

Despite dropping their rematch against the Indiana Pacers Wednesday night, Randle’s play was one of the few bright spots.

He’s been playing with a vibrant joy in the preseason, a stark contrast to his soulless play last season.

Through three preseason games, Randle is averaging 14.3 points on a 48/35/78 shooting split, 7.0 rebounds and 4.3 assists against 0.7 turnovers. His assists (13) to turnover (2) ratio has been impressive. While that could go up as his minutes (21.9) rise in the regular season, his better play since the arrival of an in-prime point guard Jalen Brunson passes both the smell and eye test.

Unlike last season, when he looked lost next to Kemba Walker and Alec Burks, Randle has been in his element less than a week before the start of the season. All the starters have yielded positive net rating led by RJ Barrett’s plus-17. Randle and Brunson are tied with plus-12 while the much-maligned Evan Fournier is a plus-13.0 and starting center Mitchell Robinson a plus-13.3. The starting lineup is producing 13.5 of the Knicks’ 25.3 assists.

“It’s amazing [the way our starting group is playing]! I think everybody is just playing for each other. It makes the game easy.”

While the Knicks’ bench play is still a work in progress with Quentin Grimes missing time and with Derrick Rose in and out of the lineup, still acclimating after a long layoff, their starting group’s chemistry is an encouraging sign.

“I’ve just bought into what coach is doing, how he’s trying to play. I’m just trying to be a leader and establish [a] pace of play, unselfishness for our team because I feel like we’re at our best when we play like that.

It’s a refreshing sight to watch Randle’s preseason play. He’s hardly forced a play and his ball-stopping ways have noticeably decreased. Most of his points have come in the flow of the offense. But it was not just solely because of Brunson easing his offensive burden.

Randle is deliberately trying to change his style of play after thinking out of the box this summer. His ball-stopping isolation plays have noticeably decreased. Most of his points have come in the flow of the offense. His pace has dramatically improved from 97.68 last season to 103.90 this preseason.

“[I’m] Just understanding the game. I watched a lot of [Eurobasket] on how they move the ball and understand that it all comes back around. So I’m just trying to play the right way.”

It’s very different from what he’s accustomed to since arriving in the league as a bully ball forward out of Kentucky. While it will take time before he fully learns a new concept, there is already a noticeable positive difference in his play this early.

“The game constantly changes, constantly evolves and I’m just trying to learn from my mistakes and keep playing.”

Among the Knicks starters, Randle’s usage rate of 22.2 is behind RJ Barrett’s 26.0 and Brunson’s 23.1. While it’s hard to put a stock on preseason games, Randle’s willingness to adapt to a reimagined Knicks offense is a great sign that things could be different this season.