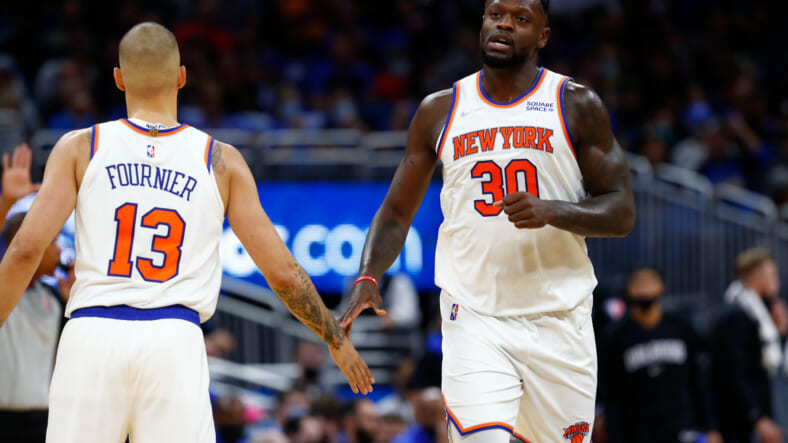 Evan Fournier feels more excited than relieved as he is penciled to start anew for the New York Knicks when they open their preseason games against a young and hungry Detroit Pistons team Tuesday night.

Fournier has won the starting job by default as second-year wing Quentin Grimes missed most of the training camp with left foot soreness. Grimes will skip the Pistons game, and there was no given timetable for his return.

“I can’t wait actually [for Tuesday night]. Not that I don’t like practices but I enjoy games a little bit more. It’s going to be good at the Garden again and get a feel of the atmosphere, our group and the way we play. Actually doing [in] games the stuff that we’ve been working on. We’re basketball players. We enjoy playing the game. We’re hoopers.”

Fournier will be back to reprise his role as a spot-up shooter in a starting unit that was hounded by spacing issues last season. With more familiarity and acceptance of his new role, Fournier could reset his franchise record of 241 three-pointers last season.

Jalen Brunson, who will replace the ineffective and oft-injured Kemba Walker, is expected to take the lead ball handler reins from Julius Randle. It can be noted that Fournier has developed good chemistry with Randle in their two-man game as the season wore on. Fournier was Randle’s most assisted teammate last season. Randle was credited for 1.8 assists on 2.1 made field goals of Fournier, per NBA’s player tracking data.

Randle even called Fournier ‘my guy’ during his media availability at the training camp.

That chemistry could be one of the factors why Thibodeau isn’t ready to give the starting job just yet to Grimes, even if he’s healthy.

In lieu of Grimes, Cam Reddish is expected to step up. Reddish has the physical tools — 6-8 with a 7-1 wingspan — to be a solid perimeter defender.

The former Atlanta lottery pick has realized that his defense would be his ticket to a rotation spot under Tom Thibodeau.

According to an SNY report, Reddish had played with the starting unit when Grimes and Fournier sat out in some practices at the training camp.

Reddish’s situation will be one of the interesting subplots of the season for the Knicks as the 23-year-old forward is set to enter restricted free agency next summer.

But the biggest thing to watch in the Knicks’ first preseason game is Randle’s role in the Knicks’ reimagined offense, which could impact Fournier’s game.

Thibodeau already hinted at lessening Randle’s ball-handling duties with the arrival of Brunson.

“For [Randle], because of the strength of the club, we can use him in different ways. He doesn’t always have to have the ball. He can play off the ball. We can use him in pick-and-roll. There’s a couple plays in which when he catches it and he catches it on the run, he’s very hard to stop because of his quickness and his strength . . . So the more he plays like that, the more he moves without the ball, the more he can run the floor and the better it is for us. And for him. Because the game is easier. When you have the ball, you’re going to have the ball locked into you. Then you have to move the defense before you can really get to the point of attack to get into the paint to force the defense to collapse.”

In short, Randle will play more off the ball. Randle’s playmaking, which largely benefited Fournier’s historic shooting last season, is expected to slip this season.

“For [Randle], every year you want to add to your game. Having coached against him, one of the things I worried about is him running the floor. So if we can get him down the floor and catch small guys on him, catch the defense before he’s set, that’s a big advantage for us. Playing off the ball and catching it on the run, and driving it through the elbow. Those are things that he’s done well in the past and I want him to get back to that. I want there to be a versatility to his attack so it’s not one-dimensional.”

How will Randle adjust to his new role? Will Fournier get more looks as he did last season with Brunson as the team’s leading playmaker?

Those questions will have some answers Tuesday night.