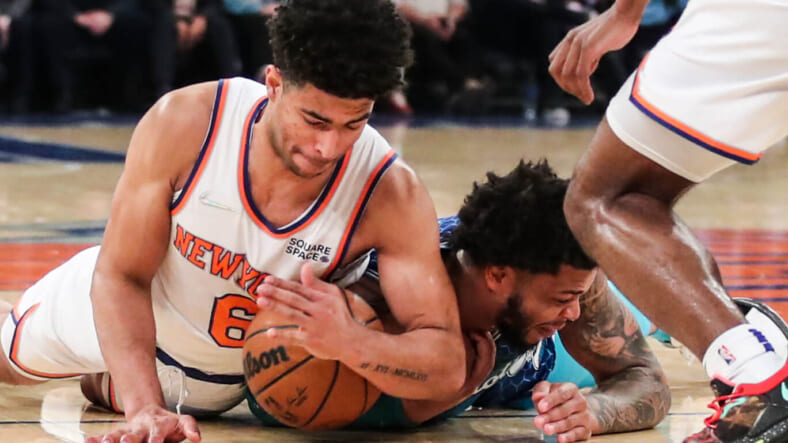 A day after Tom Thibodeau hinted that veteran Evan Fournier would likely remain as the New York Knicks starting shooting guard, Quentin Grimes was seen on a walking boot.

Grimes, who was reportedly made untouchable in the Knicks’ failed Donovan Mitchell pursuit, is suffering from a left foot soreness, according to multiple reports.

Ian Begley of SNY was the first to report Grimes’ injury.

The walking boot, according to Begley, is viewed as a precaution. He was a full participant in the Knicks’ first day of training camp last Tuesday. While it’s just a minor injury, it’s still a blow to Grimes’ bid to earn a significant role in Thibodeau’s rotation.

The 25th pick of the 2022 NBA Draft, Grimes started his rookie year out of the rotation. He slowly carved his way up with his shooting and stout individual defense, exploding for a career-high 27 points against Milwaukee in December. He would score in double figures in nine more games but his ascent was derailed by COVID-19 and a partially dislocated kneecap.

With a clean bill of health, Grimes powered the Knicks to the NBA Summer League in Las Vegas last July in the midst of the Knicks’ trade talks with the Utah Jazz for the three-time All-Star Mitchell.

Grimes was named to the All-NBA Summer League team after posting a team-high 22.6 points and 3.4 3s per game on 41.4 percent overall shooting. He added 4.0 rebounds, 4.2 assists against 3.2 turnovers and 1.2 steals. He also yielded the highest net rating among the Knicks Summer League players with plus-10, meaning his team has outscored their opponents by 10 when he is on the floor.

The Jazz reportedly asked for Grimes but the Knicks tried their hardest, dangling picks and their other young players, to keep the second-year wing off the table.

Mitchell was eventually traded to the Cleveland Cavaliers.

Grimes’ situation is one of the intriguing storylines of the Knicks season, as Thibodeau prefers Fournier to start for now.

Grimes shot 38.1 percent from the three-point zone on 4.1 attempts in 17.1 minutes off the bench last season. Fournier, meanwhile, hit 38.9 percent of his 7.7 three-point attempts in 29.5 minutes as a starter.

Grimes projects to be a better all-around defender than Fournier, especially next to 6-foot-1 Jalen Brunson in the Knicks’ backcourt.

But Thibodeau will not hand the starting spot to him on a silver platter. Grimes needs to be durable if he is to supplant Fournier in the starting unit.