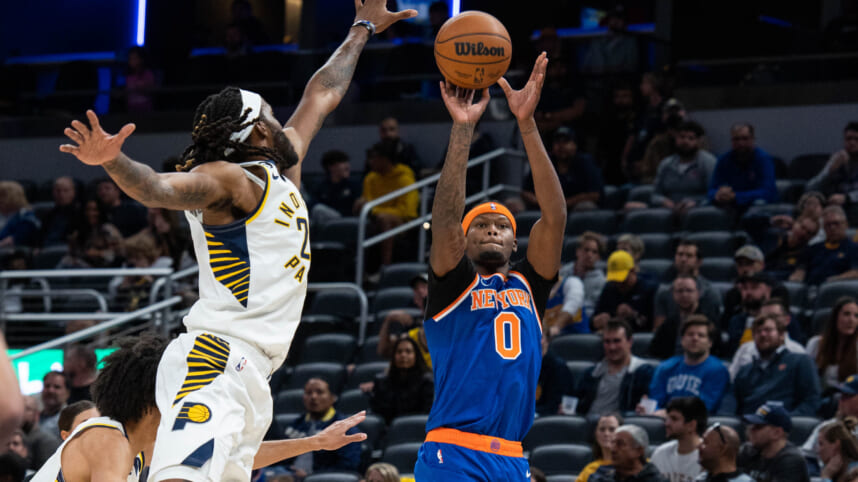 The New York Knicks were cruising to what was supposed to be their third straight win in the preseason. All they needed was to protect a 10-point lead midway through the final quarter. But they couldn’t.

The Indiana Pacers came storming back to avenge their earlier loss in New York with a stunning 109-100 win over the Knicks Wednesday night at the Gainbridge Fieldhouse in Indianapolis.

It was the Knicks’ first loss in the preseason and second overall in the Tom Thibodeau era.

RJ Barrett continued his strong preseason showing. Julius Randle played his best game. All Knicks starters finished with a positive net rating. It was the reserves that unraveled in the endgame meltdown.

Cam Reddish struggled early on but found his range in the final quarter with his three-pointer giving the Knicks a 94-84 lead with 6:23 left. Then it was Pacers all the way.

The Knicks’ reserves had a rough shooting night without Derrick Rose (rest) to lead them.

Reddish continued taking bad shots, going 3 for 10 from the field, while Immanuel Quickley missed 14 of 18 shots. Miles McBride also had a tough 1 of 6 shooting night. Obi Toppin (8 points on 4 of 7 shots) and Isaiah Hartenstein (7 points, 10 rebounds and 5 assists) could not save the Knicks’ second unit.

“In every game, you’re gonna learn something. So obviously, we didn’t do what we needed to do. I didn’t like the way we played offensively in the second half.”

Compounding the Knicks’ shooting struggles was their lousy defense. The Pacers shot 50 percent from the field in the second half.

The Knicks’ porous defense allowed Canadian rookies Andrew Nembhard and Ben Mathurin to score a combined 22 points in the final quarter as the Pacers won without their franchise cornerstone Tyrese Haliburton who sat out with back soreness.

Without Rose, Quickley and McBride failed to stabilize the Knicks’ offense in the most crucial stretch. After Tom Thibodeau called Quickley’s defense underrated, it was non-existent against the Pacers.

“And [Immanuel] Quickley, guys were beating us with the same move. That should never happen. So, we got to straighten that out. The starters got us off to a good start at the start of the third [quarter]. But we got to do it with both groups. We can’t have lulls. The starters played fairly well.”

Barrett led the Knicks with 21 points, hitting 7 of 14 shots, and added four rebounds and three assists. Randle had 13 points, eight rebounds and five assists, doing most of the damage in the first half. Jalen Brunson again struggled offensively against the Pacers, now handled by his former Dallas Mavericks coach Rick Carlisle. The new Knicks point guard missed 10 of 14 shots but still ended up with 11 points, eight rebounds and three assists.

All Knicks starters did not play in the pivotal fourth quarter.

The Knicks will wrap up their preseason schedule on Friday at home against the visiting Washington Wizards.