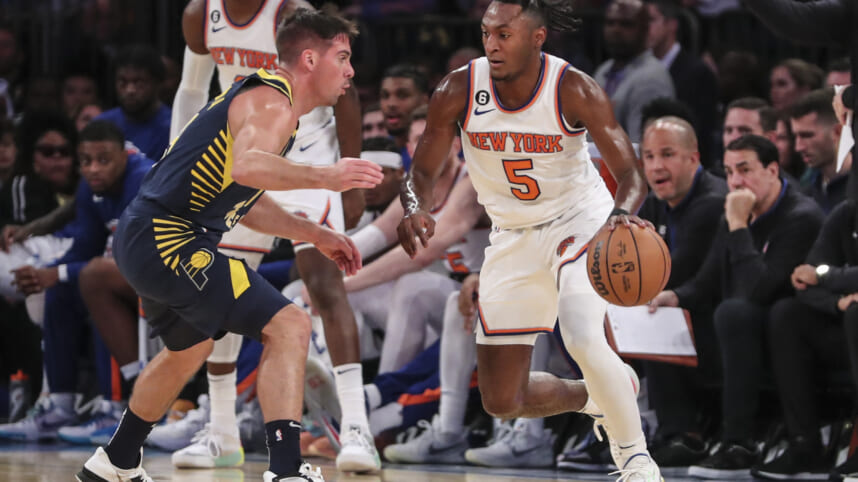 New York Knicks’ electric combo guard Immanuel Quickley is entering his third season with three goals: get better defensively, shoot better than 40 percent from the field, and have consistency.

After two preseason games, Quickley is on track.

In the Knicks’ first two preseason wins, the 6-foot-3 Quickley averaged 15 points on 43.5 percent shooting, including 40 percent from the three-point zone. He was productive in 19.5 minutes, posting three rebounds, three assists, and two steals while maintaining his low turnover rate (1.0).

“I just like his versatility — all the things that he brings to the team. He can play both guard spots. He can play with the starters, he can play with the bench. He’s a shot maker. He’s a playmaker and I thought the ball pressure and speed with Derrick (Rose) was really good. Then the game changed again when Deuce (Miles McBride) was in with him and the ball pressure by those two guys was really, really good. So and that got us into the open floor as well.

So he’s probably a little bit underrated defensively everyone views him — the obvious is his shotmaking but he’s also a pretty good defensive player.”

Quickley bulked up in the offseason not only to get better at finishing around the rim. He also wanted to have a stronger body to pressure opposing guards.

Quickley’s defensive rating in those twin wins against the Pistons (88.9) and Pacers (95.7) had been impressive. It was a marked improvement from his 104.8 defensive rating last season. But it’s too small of a sample size. However, there was a noticeable difference in his game.

He now attacks the rim with confidence. He’s not shying away from contact. In fact, he’s embracing it. That fresh air of confidence breathes from his newly gained upper body strength.

“I feel defensively is definitely one, finishing around the basket, and just having legs on my jump shot. I want to have a great year defensively, a higher field-goal percentage and just being more consistent. Being stronger is going to help on both sides of the court.”

Quickley’s NBA education isn’t complete yet. He has made strides since his rookie year, yet he still has hurdles to overcome before graduating from a reserve role.

Quickley continues to lean on Rose, a former MVP, but he’s also added Jalen Brunson, a rising star, to his growing list of mentors.

“Obviously, everybody sees everything he does on the floor, but I feel like leader-wise, he’s somebody in the huddle who’s very vocal and very positive. I actually went to his house [Saturday] night and we just kicked it. So he’s somebody you can talk to off the floor, too, chill with. He’s gonna be great for this team.”

Accelerating Quickley’s learning curve should be a boon to a Knicks team with playoff aspirations. Equipping himself with the necessary tools, like bulking up and surrounding himself with great mentors, is a massive step towards becoming a complete player.