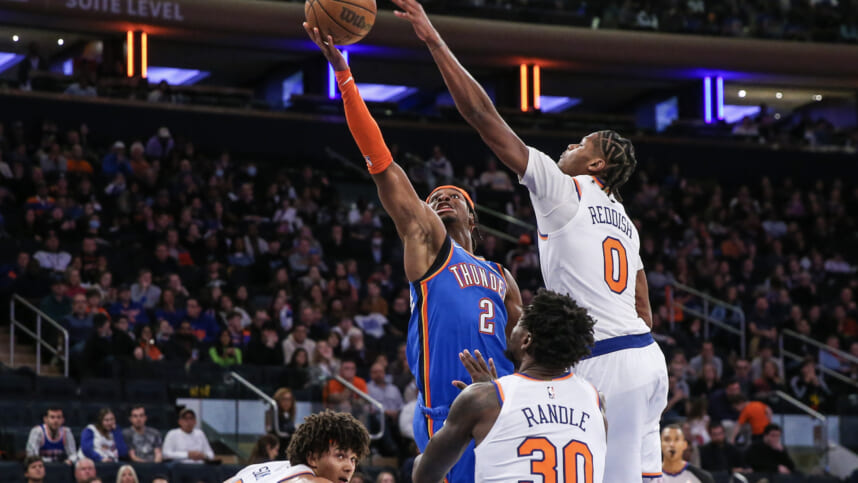 Cam Reddish entered the season in limbo. But 15 games into the season, he has cemented himself in the New York Knicks starting lineup.

Reddish has put together his most impressive stretch in his Knicks tenure over the last three games. Always knocked for his inconsistent motor, Reddish is starting to flourish. The former lottery pick has scored in double figures in each of his previous three games, averaging 18.3 points on an efficient 57/36/92 shooting split.

But what has earned him a starting spot in Tom Thibodeau’s shortened rotation is his defense. Over that stretch, Reddish has collected 3.3 stocks (2.3 steals and 1.0 blocks).

With his 6-foot-8 frame and 7-foot-1 wingspan, Reddish is the ideal wing defender in the modern NBA. Thibodeau has just started to scratch his immense potential.

“[Reddish] is starting to get into a better rhythm on both ends. He’s long. He’s athletic and I think he’s taken a lot of pride in it. …His athleticism is a great asset and I like to take advantage of it.”

Reddish started his hot streak with a season-high 26 points and four steals to pace the Knicks in their underwhelming loss to the Oklahoma City Thunder.

It was a blessing in disguise, as that loss led to a lineup shakeup that kept Reddish in the Knicks’ starting unit.

His confidence was galvanized by Thibodeau’s decision to go with a nine-man rotation, increasing Reddish’s playing time.

“I just go day by day [with the starting lineup]. I liked a lot of the things that [Reddish] is doing. I think getting the rotation down has allowed him to get into a better rhythm. And so that’s part of it also and just keep it going. I think there’s a lot more to it in him.”

Reddish averaged no less than 33 minutes in their last three games. No longer looking at his shoulder, Reddish continued his solid two-way play on their current road trip. He’s played a vital role in the Knicks’ sweep of the high-altitude games in Utah and Denver.

Reddish poured 19 points against the Jazz, and his defense helped limit Jordan Clarkson to 15 points on 5 of 16 shooting. He added one steal and one block.

“He’s a hard guy to pass around. Even just his ball pressure can be very disruptive. So it allows you to, there’s more hang time on passes. So when you’re closing out to shooters, he’s a hard guy to pick and rolls to throw over. All those things matter.

So when you add them up and I think he’s starting to understand all the schemes and his responsibilities, seeing things he’s been in. He can guard multiple positions in guard point guards, twos, threes, fours and you can even switch them on to some fives.”

Reddish has now strung five consecutive games with a defensive stat. Two of his three stocks in Denver came against the Nuggets star Jamal Murray in traffic. And what’s more impressive is his consistent effort that does not reflect on the box scores. He led the Knicks with 10 deflections and 24 contested shots (10 each against the Jazz and Nuggets) over their past three games.

If Thibodeau can continue unlocking Reddish’s gifts, the Knicks may end up regretting their decision not to extend him in the offseason.