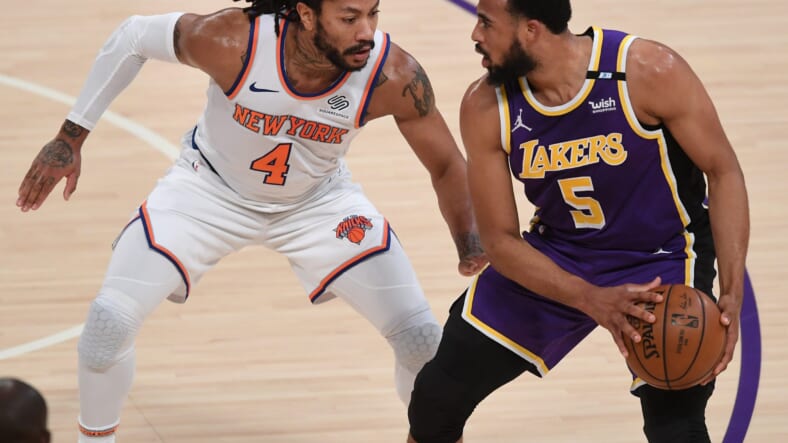 Almost but not quite.

The New York Knicks couldnâ€™t hold on to a 10-point fourth-quarter lead and came one rebound away from finally ending a seven-year playoff drought.

Instead, they watched Wesley Matthews beat them off the boards to send the game into overtime.

Then Talen Horton-Tucker had the last laugh in his matchup with his childhood hero Derrick Rose in the extra session.

Tucker hit the game-winning three with 21.1 seconds left as the LeBron James-less Lakers survived the Knicks in a 101-99 overtime thriller late Tuesday night at the Staples Center.

The Knicks failed to put up a decent shot in the last play, with RJ Barrett throwing up a wild shot in front of a Lakersâ€™ suffocating defense.

â€œRebounding beat us tonight. All we had to do is get that last rebound (on) the last shot of the game. Everyoneâ€™s got to get a body on everyone,â€ New York coach Tom Thibodeau lamented.

It was a heartbreaking loss for the Knicks, who blew a golden opportunity to clinch a playoff berth after the Miami Heat beat the Boston Celtics earlier.

They also had one less problemÂ with James opting to delay his return from an ankle injury. But they couldnâ€™t capitalize.Â

The loss sent them to a complicated three-way tie with the Heat and the Atlanta Hawks at 38-31.

Atlanta momentarily assumed the fourth seed while Miami moved up to fifth and New York tumbled to sixth with three games left.

The Knicks will try to punch a playoff ticket at home, needing only one win in their three homestands against the San Antonio Spurs, Charlotte Hornets, and the Celtics.

They wouldnâ€™t be in this precarious situation had they didnâ€™t lose poise down the stretch.

A Frank Ntilikina three-pointer gave the Knicks an 85-75 lead with 7:35 left in the regulation. But the Lakers battled back and came within five twice before a Matthewsâ€™ three-pointer, and Andre Drummond layup tied the game at 89 apiece.

Julius Randle, who showed up against his former team with a game-high 31 points, couldnâ€™t bring the Knicks home.

Kentavious Caldwell-Pope missed a wide-open three from the corner, but Matthews tipped it to send the game into overtime.

The Knicks battled back from five points down to lead by one in the extra time behind Rose and Randle. Rose appeared to have the clincher when he stole the ball from Tucker with a minute left. But a Randle turnover set up Tuckerâ€™s heroics.

Tucker, who also starred in Simeon Career Academy like Ross, delayed the Knicksâ€™ march to the playoffs. The second-year Lakers guard came off the bench to contribute 13 points and 10 assists in an impressive showing.

â€œNot too many kids from Chicago can say they did that,â€ said Horton-Tucker, who is set to become a restricted free agent this summer.Â

Rose scored a season-high 27 points with six rebounds, six assists, and three steals but still was not enough.

No other Knick scored in double figures besides Randle and Rose. Barrett turned in a dud with only eight points on 2-of-13 shooting, including 0-for-7 from deep.

The Knicks held Anthony Davis to 20 points on 8-of-23 shots, but he had plenty of help. Kyle Kuzma returned from sickbay to lead the Lakers with 23 off the bench. Andre Drummond, who shunned the Knicks in the buyout market, had a huge double-double night with 16 points and 18 rebounds.

If thereâ€™s any consolation for the Knicks, their defeat pushed the Lakers to 39-30 and just one game behind the Westâ€™s sixth seed Dallas Mavericks (40-29).