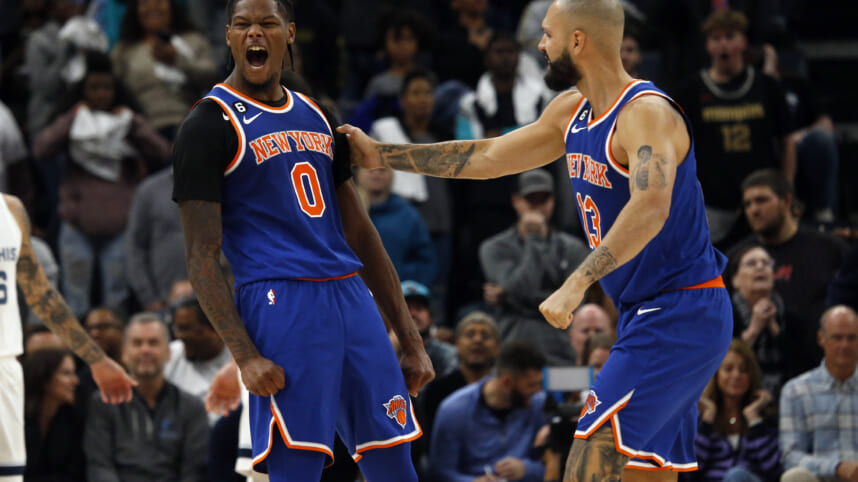 The New York Knicks hit another low point of the young season, falling to the tanking Oklahoma City Thunder, 145-135, Sunday as they heard boos from the sold-out Garden crowd.

Soon-to-be restricted free agent Cam Reddish was one of the only few bright spots with a season-high 26 points on 10 of 17 shots, easily his best offensive outing as a Knick. But what’s more encouraging was he put up a solid defensive effort with four steals and one block. He led the Knicks with five deflections.

That outstanding two-way performance was the projected ceiling for Reddish when he entered the NBA as the 10th overall pick in the 2019 NBA Draft.

However, those efforts are few and far between.

Reddish’s breakout performance against the Thunder was only the third time in 13 games this season that he reached double-digit scoring.

The former Duke standout is averaging 8.3 points, 1.8 rebounds and 1.3 assists with 44/33/87 shooting split in 21.3 minutes of playing time. On the surface, it’s an uninspiring line for a player of his size and skill set, which fit the modern NBA. But beyond the box scores, his plus-12.6 on/off differential ranks in the 92nd percentile, according to Cleaning The Glass.

Not bad for a player who was cratering to oblivion before this season.

After the Knicks acquired Reddish from Atlanta for Kevin Knox and a heavily protected first-round pick midway through last season, his role was murky. It spiraled after a lackluster preseason which factored into the Knicks’ decision not to engage him in serious extension talks.

But Quentin Grimes’ lingering left foot soreness gave him one more shot to prove his worth.

Reddish did with a scintillating opening night performance in Memphis. He’s been since a fixture of Tom Thibodeau’s regular rotation, even earning a starting gig until Grimes, presumably, gets his conditioning back.

Currently, the Knicks still have rotation logjams despite unloading their veterans in the offseason for cap space that they used to land Jalen Brunson.

Evan Fournier’s fall from the starting lineup and Derrick Rose’s reduced role raise speculations that the two veterans could be moved before the trade deadline. Trading them for picks and fringe players or as part of a larger package would cement Reddish’s role giving the Knicks the entire season to evaluate him before making a decision next summer.

So what could be Reddish’s price tag at the rate he’s going?

“Reddish is a guy we all know has a lot of potential and athleticism. He projects to be a pretty good defender… If he can be consistent, I’d imagine he could definitely be getting some full MLE offers.”

Next season’s standard midlevel exception is projected to be $11,014,500. So a three-year deal for Reddish could be in the $36-40 million range, which would be a bargain if he hit his ceiling in the duration of his next contract. At the very least, he ends up a serviceable rotation player on a friendly deal that could be easily moved.

The question is, are the Knicks willing to give Reddish a clear role to find out?