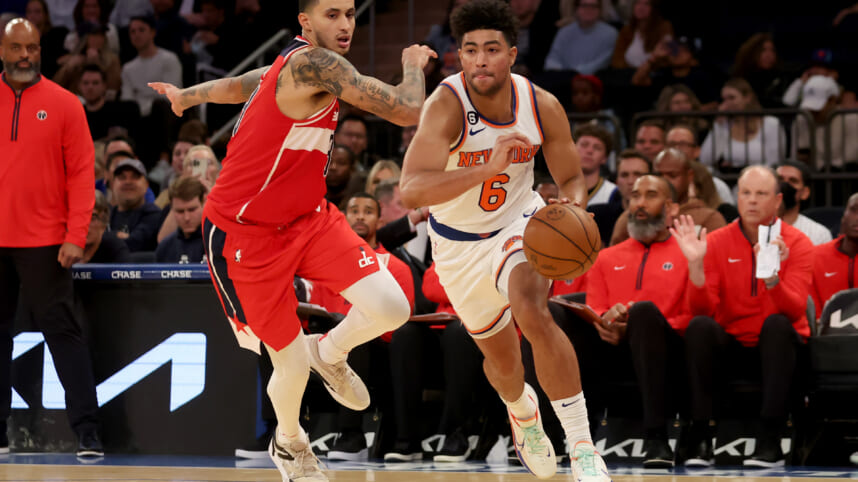 Grimes will replace Evan Fournier in the starting lineup in Tom Thibodeau’s bid to arrest an alarming three-game slide in their tough seven-game stretch against playoff contenders.

The shakeup starts in Philadelphia tonight against the Sixers, who will be without Joel Embiid and James Harden.

Grimes will be thrust into the starting role just two nights after playing sparingly in his return from a sore left knee. He was scoreless in his season debut — five minutes of garbage time during the Knicks’ 112-99 loss to their rival Atlanta Hawks on Wednesday night — and had one assist.

The 6-foot-5 wing out of Houston is expected to fortify the Knicks’ backcourt that was vulnerable with Jalen Brunson and Fournier.

According to Cleaning the Glass, the starting five with Fournier has a net rating of minus-8.8 points per 100 possessions, which ranks in the 21st percentile. His on-off differential of minus-8.8 is a career-low for the veteran Frenchman.

The presence of Grimes in the starting lineup will lessen the defensive burden of RJ Barrett and fortify their rebounding.

After the Knicks kept Grimes off the table in the Donovan Mitchell negotiations, hopes were high that he would have a bigger role this season, especially after tearing up the NBA Summer League. But his foot injury kept him out from battling Fournier for the starting shooting guard spot in the training camp.

Now, Grimes gets his chance to prove his worth.