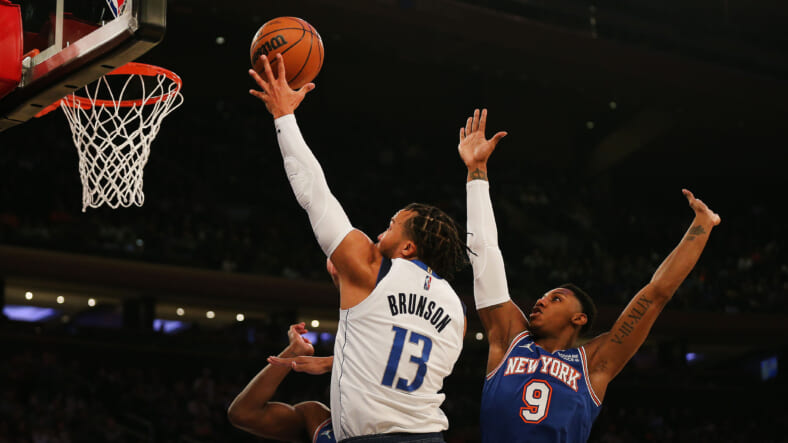 Despite two championships with Villanova and a National Player of the Year award, newly acquired New York Knicks point guard Jalen Brunson has flown under the radar in Dallas until his breakout performance during a contract year.

For the first time in his career, Brunson will enter the season with heavy expectations in one of the biggest markets and in front of arguably the most die-hard fans in the league.

But the 6-foot-1 Brunson is unfazed by the challenge of lifting New York back to the playoffs after a disappointing 37-45 season. He’s been aware of the “overpaid” chatter following an unprecedented $104 million, four-year deal for a former second-round pick. It nearly doubled the $55 million, four-year extension that the Mavericks offered after the trade deadline, which he declined.

He bet on himself and hit the jackpot. But with a great contract comes great responsibilities, especially in New York, which hasn’t experienced consistent success in the last quarter of a century or since Jalen’s father, Rick Brunson, was a backup guard in the last Knicks team that reached the NBA Finals in 1999.

The younger Brunson is confident he’s built for this moment, having been around in the last stretch of the successful Knicks era in the 90s.

“I mean definitely [I’ve started to prepare myself]. I mean, it wouldn’t be smart not to,” Brunson said on The Old Man and The Three podcast. “I’m definitely thinking about how everything’s going to be; best-case scenarios, worst-case scenarios. But I think no matter what’s going on, I just gotta own it.”

“If I play bad, I gotta own it. I gotta be better. If I play well, it’s because of my teammates who made it easier for me. I just gotta be a person who’s authentic and owns everything that he does. That’s, I think, the first step to being a guy who can connect with the fans.”

Many underestimate Brunson’s progression from a backup guard to a solid starter in Dallas because of Luka Doncic, who naturally attracts the defense. But in 44 career games without Doncic, Brunson averaged 16.6 points, 6.3 assists and 3.5 rebounds with an efficient 49/37/80 shooting split while impacting winning, plus-92 over that stretch, per Statmuse.

Brunson has thrived playing on and off the ball, depending on Doncic’s availability. In New York, Brunson is expected to have a more prominent role, barring any blockbuster move (Donovan Mitchell) that could shake up the Eastern Conference.

The Knicks’ failed Kemba Walker experiment is a cautionary tale. While Walker’s knees gave up, the Knicks had not optimized the usage of Walker as a primary ball handler when he was healthy, next to Randle. The starting five, in which Walker was the point guard, never created chemistry together. Randle still dominated the ball and, at times, alternated with Barrett in initiating the offense, relegating Walker primarily as a catch-and-shoot player rather than a table-setter.

Brunson already has plans to establish chemistry with his new teammates and perhaps avoid the same pitfalls.

“I’ve been talking to a lot of people. I’ve reached out to the guys who played in the summer league. I would love to get back in the gym with them at some point before the season starts. We have something planned, and I think that’s key — to hit the ground running before the training camp starts,” Brunson said.

“I don’t want to wait for the training camp to start being vocal, being somewhat of a leader. I got to kind of take the reins early. And when I mean leader, I’m just trying to get guys on the same page. I love the fact that we can have a group of guys who are hardworking and have good chemistry if you can kind of set that tone now. I think it’d be great well before training camp starts.”

Brunson has been a leader since his Villanova days and dates back as early as his MVP run with Team USA in the 2015 FIBA Under-19 World Cup. The Knicks certainly need someone like Brunson to steady the ship after their lackluster playoff exit in 2021 and the dismal follow-up last season.