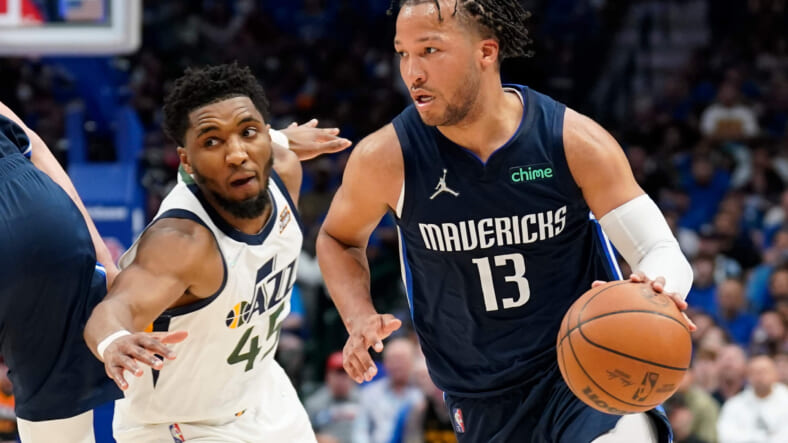 As a kid, he used to run around the New York Knicks locker room, tagging along with his father, Rick Brunson, a Knicks backup guard in the late 1990s and early 2000s.

Back at Brunson’s home in Southern, New Jersey, a young Jalen used to mimic Allan Houston’s jab step, the precursor of a silky smooth jumper. He sported Latrell Sprewell’s jersey.

Everything came full circle on Tuesday as Houston and Sprewell were among the limited crowd on hand to witness Jalen Brunson’s introduction, without media fanfare, as the newest member of the Knicks.

“I remember seeing a couple of these guys in the locker room when I was a kid,” Brunson told MSG Network’s Bill Pidto in the non-traditional introductory presser. “It’s crazy to see [them] here right now. I don’t want to say it’s emotion, but it just brings back a lot of memories and makes me feel like I’m supposed to be here, and I’m just very excited to get things going.”

Indeed, it’s exciting times in New York as the Knicks finally filled their most glaring hole for years with a young point guard on the rise. Brunson brings stability to the position that saw a revolving door of has-beens and wannabes. He has throwback vibes with his unbelievable work ethic and a dog mentality, traits that fit the fabric of New York City and the grit of the Knicks teams that his father was part of.

He’s much better than his father as a player and much younger than Kemba Walker, whose New York homecoming failed spectacularly last season due to his aging knees.

While the Knicks dodged hard-hitting questions [from the beat reporters who were not invited to the event] about the circumstances of their new point guard’s signing, Brunson confirmed what has been speculated for so long.

“I’ve known for a long time. It’s family,” Brunson said when asked why he chose the Knicks over his former team, Dallas Mavericks, in the free agency. “It’s a comfort level to this and something I just couldn’t turn a blind eye to it.”

“These guys have my best interests at heart. And they’ve known me since, I think Leon (Rose) probably saw me before my dad and it’s just this is one big family for me and I’m just super excited.”

Rose, the former high-profile agent turned executive, finally leveraged his long-standing relationships. While Brunson is not the All-NBA player that the Knicks have longed for, he is a step in the right direction.

“[I’m] A person who’s never going to quit,” Brunson said. “It’s just about the little things for me.”

“I know how people see the stats and all that stuff. But the things that matter to me the most are how the little things like putting my body on the line a lot for my teammates, diving in on the ground and I’ve been a person who they can just turn to saying, ‘that guy is gonna just do everything he can to help this team win the game.’ And that’s just how I have been my entire life.”

Brunson brings with him a winning pedigree — two college championships with Villanova as a National College Player of the Year and a co-starring role with Luka Doncic in the Mavericks’ Western Conference Finals run last season — to the Knicks that they sorely lack.

“For the longest time, I thought I would never leave Dallas. I thought Dallas was [going to be] my home for my entire career. And it’s a great place. It’s a place I really wanted to be, and I’m so thankful they took a chance on me. And it was definitely tough,” Brunson said about his decision to leave for the Knicks.

“I mean, our teammates and organization made it special. The relationships I made there were really special. So I’m definitely going to miss it.”

But blood is thicker than water. And unlike the Mavericks, the Knicks pulled all the strings to bring Brunson home.

The $104 million, four-year deal says it all. Attached with that unprecedented deal for a former second-round pick is a better shot at becoming an All-Star guard in an Eastern Conference that doesn’t have Stephen Curry, the only active NBA point guard he’s most impressed with other than himself.

“I have this confidence,” Brunson said. “Because I mean, if I’m in awe of somebody before a game, that means something’s wrong. So I try not to get that feeling, but I’ll give one guy credit who just won the championship. That dude is special. I’ll say Stephen Curry for sure. But besides that, I’m not really in awe of everybody, and that’s not a knock on anybody. It’s just how I approach the game.”

For now, Brunson is penciled as the Knicks’ lead guard pending the result of the Donovan Mitchell sweepstakes.

While the absence of reporters failed to posit the hypothetical question of how he sees himself potentially fitting in next to Mitchell, whom he badly outplayed in the playoffs, Brunson is no stranger to playing next to another ball-dominant guard. He thrived and learned a lot playing with Doncic in Dallas.

“I learned a lot from him. I learned how to run the team. He’s had a lot, I don’t want to say pressure, but he’s got a lot of notoriety,” Brunson said of Doncic. “And he handles it with class and does everything he can to help his team win. And that’s the best.”

“He’s always been about winning. And I’ve learned a lot from him just on that aspect, like getting to know him over a couple of years.”

Brunson has always been a leader. Having a generational talent around him every day in Dallas only elevated his game. With or without Mitchell, Brunson is expected to lead the pack.

“We got a lot of dogs in this team. We got a lot of guys who are just hard workers and who just want to just go out there and just win,” Brunson said.

“I’ve seen that from watching these guys, and I know a couple of them. These guys are hungry. I mean, that’s, you don’t get that a lot. And especially if you’re new to numerous guys like that. It’s a plus.”

The Knicks have no illusion that the Brunson signing makes them a contender. That’s why they are motivated to trade for Mitchell at a reasonable price. But Brunson represents what Rose is all about — family culture. Rose hopes it will produce a consistent winning team by fostering that culture as the foundation.

Now an assistant coach, his father was part of the last Knicks team to have marched into the NBA Finals. Brunson hopes to outdo his father and win a championship in New York.

“I think the city deserves that,” Brunson said. “They deserve a team to get back to [the NBA Finals]. It is definitely a process. As long as we’re taking everything day by day, focus on getting better every single day and with the end goal in mind, but focus on one day at a time, and I think that’s the best way to get better.”

Brunson’s arrival is an important step in that process.