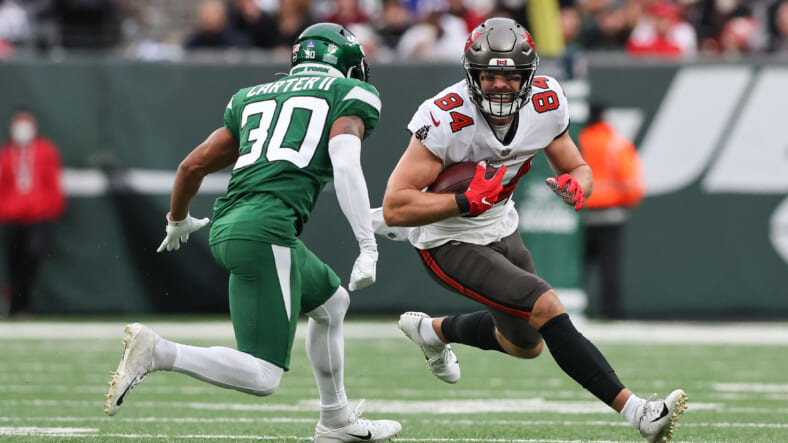 The New York Jets drafted Michael Carter II in the fifth round of the 2021 NFL draft. He will play his second year with the Jets as a 23-year-old. Out of the Jets’ last two draft classes, which were filled with big and exciting names, Carter flies a bit more under the radar. Carter is a core player to the Jets’ future at an impact position as the slot cornerback. He is destined to make a jump in 2022 for the Jets.

Carter had an encouraging start to his career as a rookie. For a fifth-round pick, he started in Week 1 and throughout the season. He played in 15 games and accumulated 776 snaps. In coverage, Carter held his own. On the ball, he did not record any interceptions, but he did have five passes defended. As a run defender and pass rusher, Carter had four tackles for loss, a sack, two quarterback hits, and 72 total tackles. In terms of turnovers, Carter did have two fumble recoveries.

For a slot corner, Carter has enough size at 5-foot-10 and 184 pounds. Carter’s best athletic trait is by far his speed. Just last year, in the pre-draft process, Carter ran a fast 40-yard dash of 4.36 with a 1.51 10-yard split. As a slot cornerback, Carter offers a complete set of skills. He can play in coverage, blitz effectively, and proved last year he can contribute in the running game being deployed near the end of the line of scrimmage.

Carter is set to take the Jets’ starting slot cornerback position for the second year in a row. He will be expected to contribute in coverage, as a run defender, and as a blitzer. Now, with Sauce Gardner and DJ Reed as two big additions on the outside, Carter should have more favorable opportunities to make impact plays on the football in coverage. With Carter, the main aspect to clearly indicate growth is more ball production.

In the passing game, Carter should record at least an interception or two this year in his development. To also see his passes defended amount increase from five and get closer to 10 would be fantastic. Based on his tackling production last year, Carter should have another roughly 75 tackle season, five tackles for loss, one to two sacks, and about three quarterback hits.

The slot cornerback position is a tough one to play, a premium position, and the Jets look to potentially have their long-term answer in Carter. As stated, making plays on the football in coverage will be crucial for him. He has the speed, quickness, athleticism, physicality, and smarts to eventually be one of the best slot cornerbacks in football. It will be fun to watch Carter in his second year. In 2022, Carter is primed to have success with the Jets.