Who will the New York Giants start at linebacker Week 1? 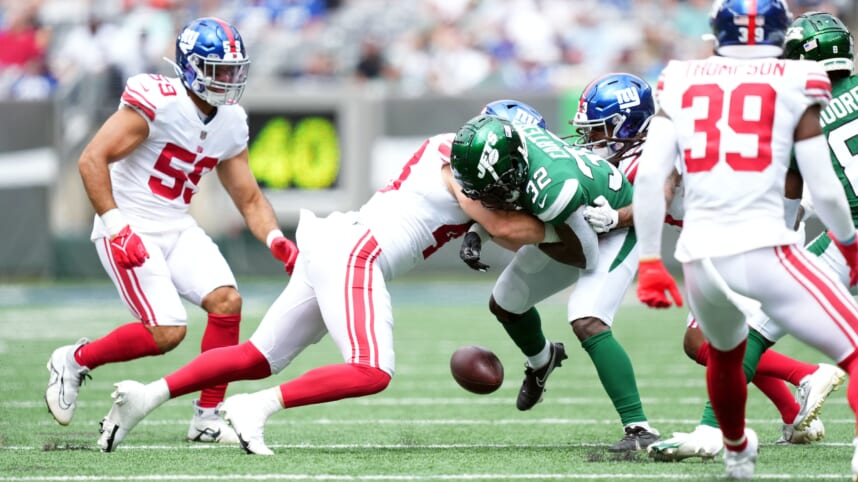 New York Giants linebacker Micah McFadden (43) knocks the ball out of the hands of New York Jets running back Michael Carter (32) in the first half of a preseason game at MetLife Stadium on Sunday, August 28, 2022. Nfl Giants Vs Jets Preseason Game Giants At Jets

Following the shocking release of Blake Martinez yesterday afternoon, it leaves the New York Giants with a major question entering the regular season. Who will start at linebacker?

All along, Martinez was one obvious starter but coming off injury. It was a matter of competition among various players who would determine the starter alongside Martinez.

One of the players helping himself to start with Martinez was rookie, Darrian Beavers. He, unfortunately, ended up on injured reserve with a torn ACL.

Even after Martinez and Beavers, many Giants linebackers are vying for starting reps. Rookie Micah McFadden, three 2020 draft picks in Tae Crowder, Carter Coughlin, and Cam Brown, as well as six-year veteran Austin Calitro are all in the mix.

The two linebackers likely to start are McFadden and Crowder.

As one of the final picks in the 2020 NFL draft, Crowder has gained a ton of experience in his first two years. He started all 17 games for the Giants last year and has played in 28 games with 1,501 snaps overall. Crowder recorded two interceptions, and six passes defended in coverage a year ago. He also totaled 130 tackles in his second year.

With the Giants’ fifth-round rookie, McFadden, comes a 22-year-old with a ton of toughness. He enters his NFL career with starting experience in his final three years of college. McFadden can offer the Giants the ability to rush the quarterback. He showed athleticism while testing prior to the NFL draft. Lastly, what gives McFadden a chance to help in year one is his instincts.

While it still remains to be seen officially, as of now, anticipate McFadden and Crowder being the two starters holding it down for the Giants in the middle of the defense.