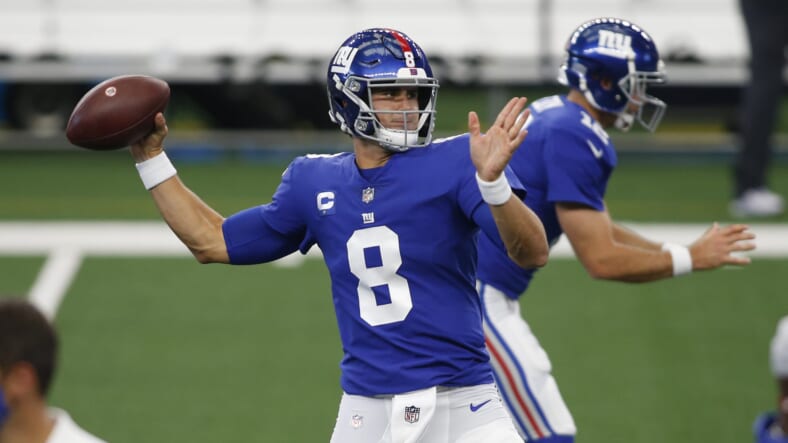 With Christmas behind us and the new year just days away, the NFL regular season is winding down very quickly. There are two weeks left to go, and the New York Giants find themselves in a unique position.

Despite having a 5-9 record and suffering through their seventh losing season out of the last eight seasons, they are still in the race for the division title due to the futility of the 2020 NFC East.

However, with two difficult games coming up against the Baltimore Ravens and the Dallas Cowboys, who both have caught fire the past couple of weeks, itâ€™s very possible that the Giants could lose out and finish 5-11, finding themselves with yet another top 10 pick in the draft.

These next two weeks will say a lot about the state of the franchise both in the short-term and potentially the long-term as well. The fate of general manager Dave Gettleman will most certainly hang in the balance, and possibly quarterback Daniel Jones as well.

Head coach Joe Judge seemed to suggest that Daniel Jones is not going anywhere in 2021 during an exchange with NFL Networkâ€™s Kim Jones on Wednesday. Judge mentioned how Daniel Jones has earned his respect throughout the course of the season, especially with all the challenges the team was faced with. Judge even went as far as to say, â€œDaniel Jones is our quarterback,â€ when asked a follow-up question about him.

Now, of course, we need to take everything with a grain of salt because what Judge said was expected, but it seems to be a safe bet that Jones will at least will be the starting quarterback at the beginning of next season, especially if Gettleman sticks around.

If Gettleman gets fired and a new general manager is brought in, however, the quarterback question definitely gets more interesting. Judge will, without a doubt, have a big say in who the next general manager is, and then the two of them will have to decide where to go at the position. Itâ€™s possible that the new general manager would want to bring in his own quarterback, and heâ€™ll be able to convince Judge to get on board, but itâ€™s also just as likely theyâ€™ll stick with Jones.

If Jones is healthy enough to play these final two games, his performance can help his chances of staying if he plays well and finishes the season on a high note. If he remains out, thereâ€™s also the chance that could hurt his standing a little bit. The best availability is availability, as Giants fans have been harshly reminded of.

Thereâ€™s no doubt Jones is talented and had a promising rookie season, but thereâ€™s also no doubt heâ€™s regressed badly in his second season. Now, a lot of that is due to offensive coordinator Jason Garrett and his horrible scheme that does not play to Jonesâ€™ strengths, but Jones certainly isnâ€™t blameless. Garrettâ€™s fate is probably already decided, and heâ€™s the most likely person to be gone after the season, but Jones still needs to play better and prove that heâ€™s taken the next step in his development, which he has yet to do regardless of the other factors that may play into it.

At the very least, the Giants would be wise to get themselves a backup who can give Jones some legitimate competition and give the team a better chance of winning games when heâ€™s in. No disrespect to Colt McCoy, whoâ€™s solid and well-respected around the league, but heâ€™s not going to cut it.

When it comes to Gettleman, heâ€™s on much thinner ice than Jones, and the rest of the season could singlehandedly decide whether he keeps his job or not. Despite having a 14-32 record over his close to three seasons as general manager, if the Giants win the division and even go on to win a playoff game, John Mara could see that as enough evidence that the team is going in the right direction and keep Gettleman.

If the Giants go 1-1 or 0-2 and finish no better than 6-10, then it becomes more likely that Gettleman will go, and Judge will bring in his own guy. This past offseason was a successful one for the Giants in both free agency and the draft, with several key role players being added to the roster, but a lot of that is due to the coaching staff getting the most out of the players.

The fact of the matter is that this roster still lacks a lot of talent in critical areas, talent that even the best of coaching staffs need to achieve success. Thatâ€™s on Gettleman, whoâ€™s had more than enough time to solve that problem by now, but his misses have just greatly overweighed his hits. Other teams that were in similar situations to us when Gettleman took over, such as Cleveland, Buffalo, and Arizona, have turned it around while the Giants have been stuck in a cycle of losing. I know that each teamâ€™s situation is different, but it should show you that rebuilds donâ€™t have to take as long as they have for the Giants.

The point is that these final two games carry a lot of weight for the Giants. They are both very important and will have lasting implications one way or another, no matter where the team finishes. They could define what the offseason looks like for the Giants while also providing answers to some critical questions surrounding the team.