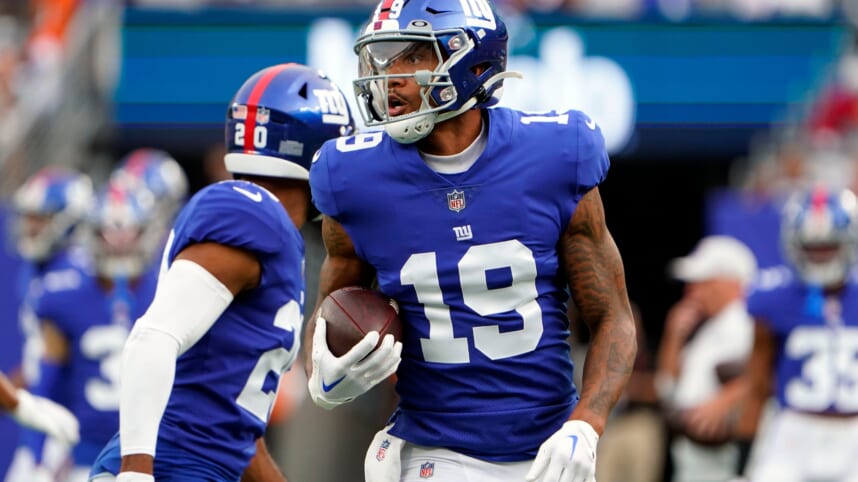 The New York Giants have an interesting decision coming up with big-money receiver Kenny Golladay, especially if they continue to reduce his workload. The expectation is that Golladay will play on Monday night against the Dallas Cowboys, especially with Kadarius Toney likely sitting with a hamstring injury.

After Golladay failed to score a touchdown during the 2021 season, he started off the 2022 campaign with a significantly reduced workload. He enjoyed 37 receptions last year for 521 yards.

In Week 1 against the Tennessee Titans, Golladay played in 77% of offensive snaps, hauling in two catches for 22 yards. However, he was barely factored in against the Carolina Panthers, enjoying just two snaps, counting for 3%. All of those snaps ended up going to former practice squad receiver, David Sills.

Sills handled 92% of the snaps on offense, clearly rubbing Golladay the wrong way as he indicated he should be on the field.

The New York Giants are playing to win, not to maximize their dollars:

However, head coach Brian Daboll isn’t simply throwing players on the field because they’re making a lot of money, he’s strategizing around guys who will help the team win.

Seemingly, Golladay hasn’t shown the necessary effort this past summer during the off-season. Clearly, he has fallen out of favor with the coaching staff, but Daboll was happy about his comments regarding his lack of playing time.

“I’ve been in the NFL a long time,’’ Daboll, 47, said Thursday. “I don’t know that I’ve ever been part of any team where someone’s not happy about something. I have great respect for Kenny. I’m glad he’s not happy he didn’t play, that shows competitiveness. He’s been a pro and we’ll see how it goes this week.’’

There is a slight possibility that the Giants look to part ways with Kenny, as NFL reporter Ian Rapoport suggested. However, it would require the team to take on a significant salary hit just to get him off the roster. If the Giants end up executing that, it would speak volumes about how little they value his contributions.

The Giants could trade Golladay to an interested party, and likely the only way it would work is if New York pays the bulk of his contract in exchange for a late-round pick. That is a possibility.

Per Ian Rapoport of NFL.com

The Giants are on the hook:

Golladay is in the second year of a four-year, $72 million contract. He holds a $21.15 million cap hit this year with $31.35 million in dead money. Next year, the Giants could theoretically release him and save $6.7 million, which seems like the most realistic strategy other than trading him for pennies on the dollar.

Monday’s game against the Dallas Cowboys should give us a better idea of how the Giants plan to utilize him, if at all. If he factors out once again, he could either ride the bench the rest of the season or end up being traded within the next few weeks, which seems to be a possibility given Rapoport’s perspective.