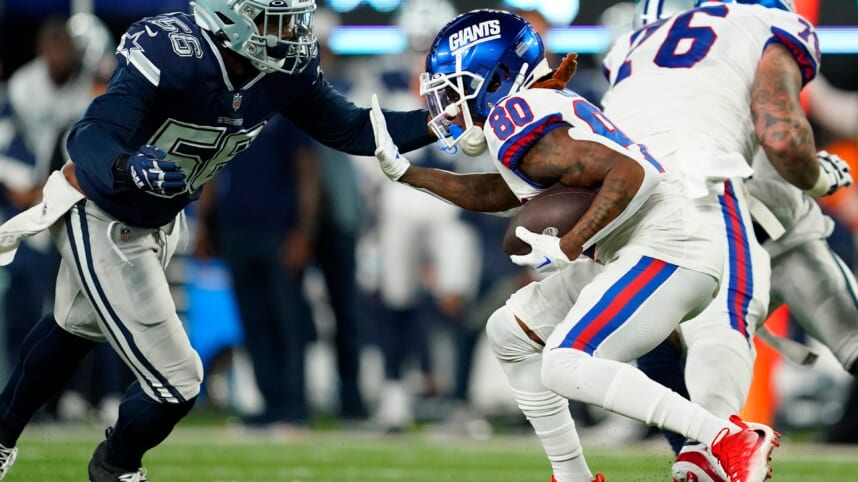 Despite injuries and inconsistencies, the New York Giants refuse to give big-money wide receiver Kenny Golladay more opportunities. In fact, when they brought him on the field for a crucial third down in the fourth quarter against the Dallas Cowboys, he dropped a pass that might’ve resulted in a first down to extend the drive.

At this point, head coach Brian Daboll has seemingly lost all faith in Golladay, writing him out of the equation on offense and barely utilizing him to his strengths. With that being said, the Giants have found a new top receiver early on in the season, which was certainly unexpected given his past production.

The elevation of Richie James for the New York Giants:

The aforementioned receiver is Richie James, a 5’9″, 185-pound special-teams star. James started his career with the San Francisco 49ers in 2018, having his best season back in 2020, playing in 11 games and recording 394 receiving yards and one touchdown. He’s already on pace to smash his yardage totals in 2022, hauling in 14 receptions on 17 targets for 146 yards and an 82.4% catch rate.

Even more impressive, James hasn’t played over 74% of offensive snaps in the first three weeks of the season, indicating he’s making the most of his opportunities.

With veteran receiver Sterling Shepard suffering a torn ACL at the end of Monday night’s game against the Cowboys, the Giants will have to rely far more on James moving forward. James has spent only 14.9% of his snaps out wide but 84% of his snaps in the slot, which could be distributed a bit more evenly with Shepard going down. Having been one of the most heavily targeted receivers on the team this season, he has just one drop, coming against the Cowboys.

Given what the Giants expected from Kenny Golladay, it is extremely surprising to see James step up into a more prominent role early in the season. Once the team gets back rookie receiver Wan’Dale Robinson, it will be intriguing to see how Daboll and offensive coordinator Mike Kafka get both involved in the scheme.