The New York Giants’ most underrated player through 2 weeks 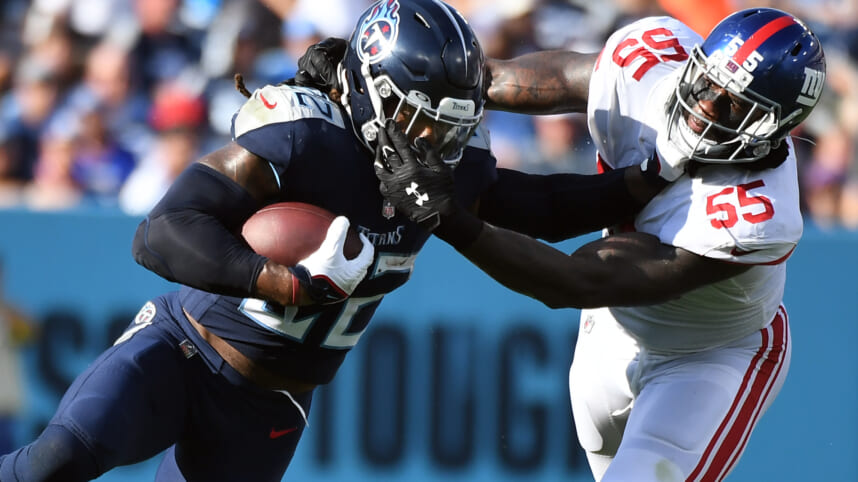 The New York Giants have had many stand-out players over the first two weeks of the regular season, but there may not be a more underrated one than free agent outside linebacker Jihad Ward.

Ward spent the 2021 season with the Jacksonville Jaguars but had experience with Wink Martindale in Baltimore back in 2020. Having put together a few inconsistent seasons since being drafted in 2016, Ward found himself signing a one-year contract with the Giants.

However, nobody expected him to play such an integral part on the defense entering the season, especially with Azeez Ojulari and Kayvon Thibodeaux manning starting spots.

Ward signed a one-year, $1.19 million deal, but over two games against the Tennessee Titans and Carolina Panthers, he’s already showcasing his value and carrying his weight.

What the New York Giants have gotten out of Jihad Ward:

In Week 1 against the Panthers, Ward finished with five tackles, four stops, and one quarterback hurry. He earned one of the best run defense grades on the team, locking down running back Derrick Henry. In fact, Henry finished the game with just 3.9 yards per carry. He tallied 82 yards on 21 carries, a dismal performance considering Henry’s dominance over the years.

In Week 2, Jihad once again helped lock down Christian McCaffrey in the running game, despite the Panthers’ running back going for 102 yards on 15 carries. If you take away his 49-yard rush, CMC had a rather underwhelming performance. Ward finished the game with four tackles, three stops, one quarterback hurry, and an incompletion in coverage.

For the price point Ward is playing at, the Giants are getting extraordinary value from the former Illinois pass rusher.

On the opposite side, Oshane Ximines has helped tremendously generate pressure and pick up the slack with two of the team’s top defenders out. Ximines has recorded five total pressures over two games, including a sack, two quarterback hits, and two hurries. He’s been tremendous in both stopping the run and getting after the quarterback.

However, the expectation is that Thibodeaux will return against the Dallas Cowboys on Monday night. Ojulari may be a game-time decision, but the Giants will have to make a tough choice if only one can play.

Do they feature Ward or Ximines on the defensive line, preferring a better pass rush or run defense? Given Thibodeaux’s pass rush excellence, the Giants may desire a bit more help in the run-stopping category, so Ward could get the nod in that scenario.