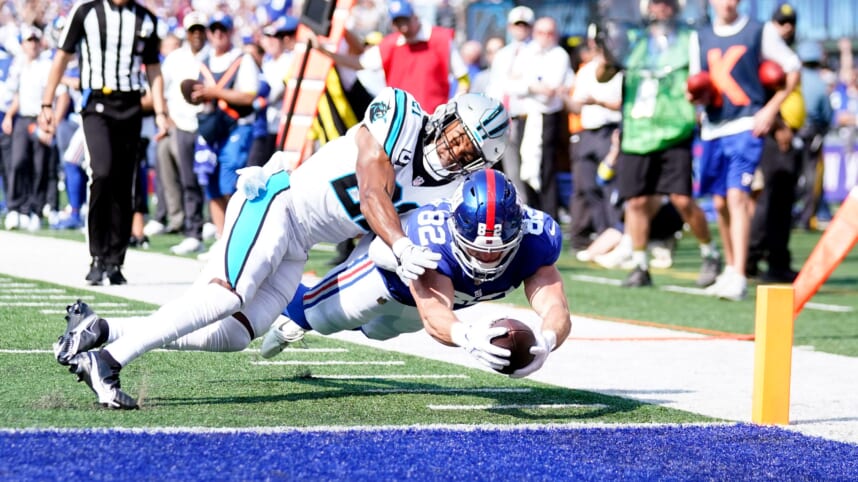 New York Giants tight end Daniel Bellinger (82) dives into the endzone for a touchdown past defender Carolina Panthers safety Jeremy Chinn (21) in the second half. The Giants defeat the Panthers, 19-16, in their home opener at MetLife Stadium on Sunday, Sept. 18, 2022, in East Rutherford. Nfl Ny Giants Vs Carolina Panthers Panthers At Giants

The New York Giants have gotten amazing value from most of their players this season, given they are currently enjoying a 5–1 record, beating the Green Bay Packers and Baltimore Ravens in consecutive games. However, one of their more underrated contributors has been tight end Daniel Bellinger, who was drafted in the 4th round of the 2022 NFL draft.

Bellinger has made his presence felt in a myriad of ways, notably with his phenomenal run-blocking prowess. Having contributed significantly in that category, the Giants have predicated their offensive style on the play action and running the ball through Saquon Barkley. However, Bellinger has made an impact in more ways than one, also showing up in the receiving game.

Across six weeks, Bellinger has enjoyed 139 receiving yards with two touchdowns, including a rushing touchdown in the red zone. He currently features an 88.2% catch rate, showcasing his incredible hands.

In fact, after years of watching Evan Engram drop footballs on a weekly basis, Bellinger hasn’t dropped a pass up to this point in the season, presenting quarterback Daniel Jones with a great security blanket and an apparent lethal red-zone threat.

The New York Giants finally have a long-term solution at TE:

The Giants have been looking for a foundational piece at the tight-end position for years, and Bellinger seems to be fitting the bill nicely. Already providing exponential value in the blocking game, his receiving game is slowly taking shape and rounding out his qualities. With expectations that he will continue his development and become a more valuable asset, general manager Joe Schoen can be happy with his mid-round steal.

Bellinger is currently tied with Colts tight end Jelani Woods with three touchdowns on the season, but he was drafted a full round later.

The Giants have gotten a ton of value out of their rookie class already, given the contributions of Kayvon Thibodeaux and the steady development of Evan Neal. They have had a few injuries as well, with Marcus McKethan and Darrian Beavers suffering torn ACL’s. Nonetheless, the success of a draft is usually determined by the value of a team’s mid to late-round selections, and the Giants have gotten more than a bargain for with Ballinger.