The New York Giants have the best rushing-duo in football 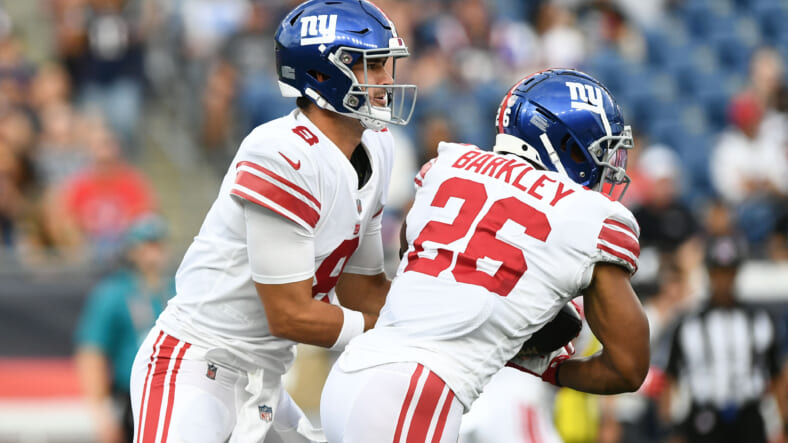 Aug 11, 2022; Foxborough, Massachusetts, USA; New York Giants quarterback Daniel Jones (8) hands the ball off to running back Saquon Barkley (26) during the first half of a game against the New England Patriots at Gillette Stadium. Mandatory Credit: Brian Fluharty-USA TODAY Sports

Heading into the 2022 season, the New York Giants‘ offense underwent a series of changes, both systematically and personnel-wise. The receiving corps looked strong at first with Kenny Golladay, Kadarius Toney, and second-round pick Wan’Dale Robinson. However, Golladay was quickly taken out of the scheme and Toney has been traded to the Kansas City Chiefs in exchange for draft capital.

However, the Giants have still managed to put together a successful offensive system, relying heavily on quarterback Daniel Jones and running back Saquon Barkley. The combo has produced impressive results, notably on the ground.

Barkley seems to be back to his 2018 self, rushing for 726 yards over the first seven games of the season. In fact, Barkley has already rushed for 143 attempts, with a career-high of 261 during his rookie season. He’s on pace for 340 attempts this year, which would smash his personal record and likely put his yardage total well into the 1000s.

In fact, he is on pace for 1,768 yards on the ground, which would smash his record of 1,307. His touchdown metrics are down a bit, but Daniel Jones has already picked up three rushing touchdowns of his own, breaking his personal best of two.

Aside from Barkley, Jones is also on pace to break his rushing PR this season. Over the first seven weeks of the campaign, he’s already tallied 343 yards on the ground over 58 attempts. His career high in attempts was 65 back in 2020, so he’s already on pace to smash that significantly. In fact, he’s on pace for 833 yards on the ground, which is more than most running backs will finish this season with.

Combined, Barkley and Jones are on pace for 2,596 rushing yards, which would be a league record. Maintaining that pace may be difficult given the physical nature of running the football at that level, but head coach Brian Daboll and offensive coordinator Mike Kafka have put together a system that keeps them relatively safe on the ground.

Trading away Toney and gaining draft capital may suggest that general manager Joe Schoen is gearing up to add another receiver to the mix via the trade deadline, but that is still yet to be seen. It is possible Big Blue sticks with their guns and roles with Darius Slayton and Wan’Dale Robinson as their primary receivers moving forward.

Nonetheless, it’s incredibly impressive to see the offense Kafka and Daobll have produced despite their talent limitations. The question is, for how long will their potent running game be sustainable until opposing teams find a way to stop them?