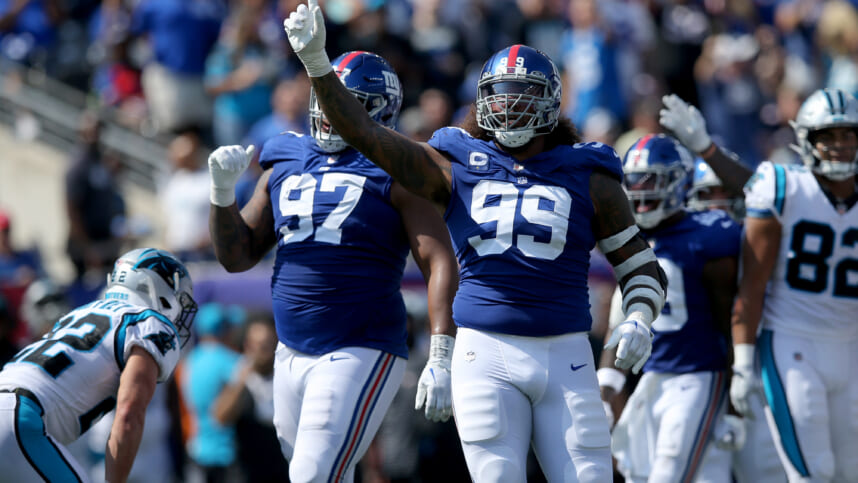 The New York Giants might be outgunned and outmanned, but one thing they do have is heart and effort. The new coaching staff, led by Brian Daboll, Wink Martindale, and Mike Kafka have put together a team that exerts maximum effort, which goes a long way toward winning football games and being competitive against good teams.

One look at the Giants’ malnourished offense should give you an idea of how much the coaching staff is doing with so little. On defense, Big Blue has a few cornerstone pieces, but they managed to develop an elite interior defense this season, headlined by Dexter Lawrence and Leonard Williams.

The New York Giants are getting a lot out of veteran Leonard Williams:

Williams, the veteran of the duo, has been in the league since 2015 when he was drafted by the New York Jets 6th overall. He spent the last few seasons with the Giants, leaving an adequate mark, notably this year with elite run defense grades.

Williams has played in 320 total snaps, missing a few games after suffering an MCL sprain against the Carolina Panthers. However, the 28-year-old has shaken off the injury and produced incredible numbers since returning in Week 6.

On the season, he’s curated 18 pressures, two sacks, six quarterback hits, and 10 hurries. He’s tallied 12 stops and forced two fumbles, which came against the Houston Texans in Week 10 this past Sunday. He finished the game with a 93.5 run defense grade, four total pressures, and five tackles.

In fact, general manager Joe Schoen will have a big decision to make with Williams next season, who could save the team $12 million if released. The substantial third-year cap hit takes up a tremendous portion of the team’s available salary space, but saving only $12 million might not be worth cutting him given his impact.

On the other hand, Dexter Lawrence has played at an All-Pro level this season under the leadership of Martindale. Over 477 total defensive snaps, Lawrence has accrued 35 total pressures, six sacks, 12 quarterback hits, and 17 hurries.

The 25-year-old has also contributed 15 stops, 18 total tackles, and one forced fumble. After a few uninspiring seasons, Lawrence has completely elevated his game, producing elite pass-rush metrics. Against Houston this past Sunday, he recorded a season-high nine total pressures with two sacks and two stops.

Schoen already picked up Lawrence’s fifth-year option at a $12.4 million base salary, which seems to be a great deal given his talents. Obviously, they saw the value in Lawrence, electing not to give up on his development just yet.

Not only do Lawrence and Williams provide stellar on-field statistics, but they are also integral locker-room voices and leaders. Without them, the Giants’ defense would be half of what they currently are, meaning they can’t afford to lose those either.