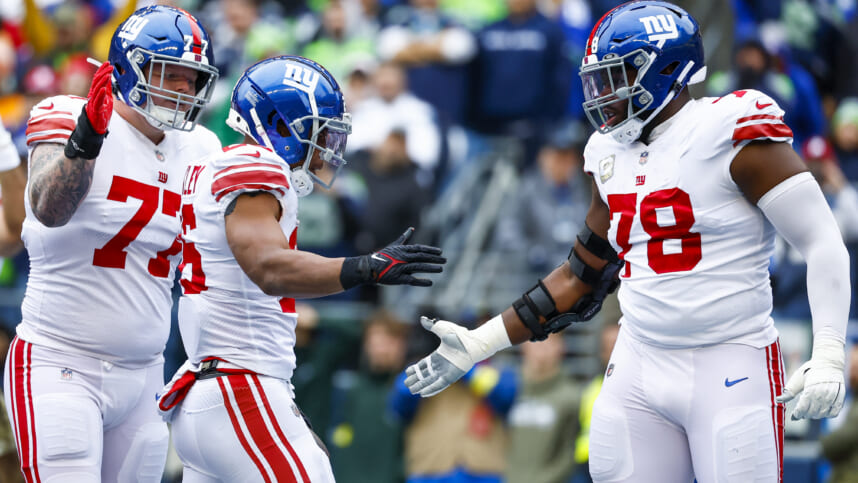 The New York Giants‘ most valuable player may not be Saquon Barkley, Daniel Jones, or Xavier McKinney, but rather budding left tackle Andrew Thomas, who is having an incredible start to the 2022 season.

In fact, over 606 offensive snaps this year, Thomas hasn’t given up a sack, allowing just nine pressures, including eight quarterback hurries and one hit, which occurred against the Carolina Panthers in Week 2.

Thomas has given up three pressures over his last six games combined, putting together one of the best pass-blocking grades in all of football at the position. The former 4th overall pick back in 2020 has developed into a superstar tackle and the Giants have two more years of control before he hits free agency.

Many believed that Thomas might’ve been the worst of the bunch in the 2020 draft class, with Tristan Wirfs, Jedrick Wills, and Mekhi Becton all drafted in the first round. Thomas was the highest tackle taken, and he’s developed into a staple on the left side for Big Blue, a position that had been a liability with Nate Solder doing his best turnstile impression.

After a tumultuous rookie season, where Thomas allowed 10 sacks, he bounced back allowing two in his sophomore season last year. He gave up 18 total pressures, but not only has the elevated his pass-blocking metrics, he’s improved his run-blocking grades as well.

Against the Houston Texans in Week 10 this past Sunday, he didn’t allow a single pressure over 69 total snaps (per PFF), proving to be a catalyst for Saquon Barkley on the ground, who accumulated 152 rushing yards and a touchdown.

While the 23-year-old lineman has sustained a few ankle injuries in the past, he seems to be playing through any conceivable pain, showcasing his toughness.

Given his success, the Giants may want to jump the gun on a contract extension, likely next year given he’s only in the third year of his rookie deal. Nonetheless, it is nice to know the left tackle position is locked down for the foreseeable future.