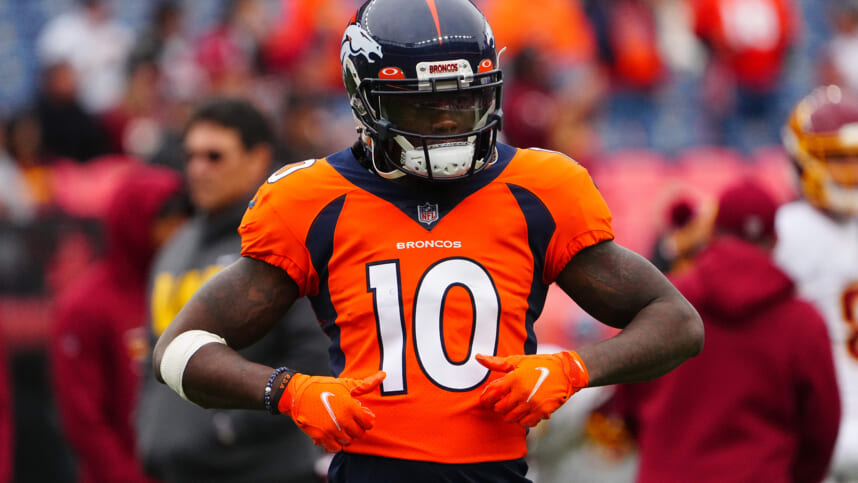 The New York Giants offense is simply malnourished after losing several impact players due to injury in Week 7 against the Jacksonville Jaguars. The team took on the Seattle Seahawks on Sunday afternoon without starting right tackle Evan Neal, left guard Ben Bredeson, and rookie tight end Daniel Bellinger. Their running game was completely demoralized without their contributions, forcing quarterback Daniel Jones to try and beat Seattle through the air.

The only problem, the Giants have no wide receivers, and Seattle did a great job locking down Darius Slayton and rookie second-round pick Wan’Dale Robinson.

It took a few dramatic efforts from Saquon Barkley to generate any production at all, with the Giants finally showing their lack of talent and the implications it has on offensive success. With the trade deadline on Tuesday, general manager Joe Schoen is undoubtedly scouring the market for opportunities, whether that be a veteran with experience or a younger player still on a rookie contract.

The New York Giants have been linked to the WR market:

The Giants have been connected to multiple wide receivers, including Brandon Cooks, Chase Claypool, and Jerry Jeudy. The Pittsburgh Steelers reportedly want a second-round pick in exchange for Claypool, and Jeudy is undoubtedly a high-priced acquisition. Schoen may be able to acquire Cooks on a much cheaper contract, given his bloated salary, but the Giants would like to avoid taking on his $26.6 million cap hit for next season.

Given head coach Brian Daboll spent a year with Jeudy in Alabama, that connection makes the most sense. Jeudy is coming off a fantastic game for the Denver Broncos, tallying six receptions for 61 yards and a touchdown. He would undoubtedly become the Giants’ top receiver if acquired, but with Big Blue getting a 3rd and 6th-round pick in exchange for Kadarius Toney, one can only imagine that Jeudy will be far more expensive.

Jeudy is currently in the third year of his rookie deal, with a $4.1 million cap hit this season. Next year, he will be 24 years old and still has a fifth-year option available for a team to pick up. He will count just $4.8 million and has the potential to be a star on any given team. He has had some issues with drops in the past, but he is an elite route runner with fantastic speed in the open field.

The Giants would undoubtedly get maximum value out of Jerry at such a ripe age, it is just a matter of how much draft capital they will have to part with two acquire him in the first place.

Given Joe Schoen is only in his first year as general manager, he would like to save as much capital as possible to continue rebuilding the foundation of the team. His rookie class has contributed significantly this season, so giving up assets for a singular player can sometimes be tough to swallow.

The argument here needs to be shifted away from the future and toward the development of quarterback Daniel Jones. If the Giants want to see the best version of DJ, they need to give him a serviceable receiving core, otherwise, his development could be stunted once again. They need to find out more about his potential before they make a decision on his long-term future. With that being said, acquiring another receiver is objectively the best move.