Should the New York Giants sign a free agent to add depth at tight end? 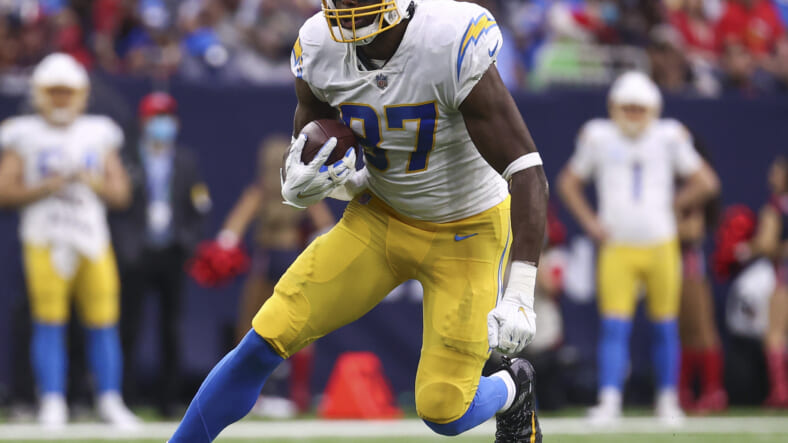 The New York Giants received some bad injury news this week. Rookie fourth-round draft pick Daniel Bellinger was placed on the physically unable to perform list (PUP) with an injury to his quad. The Giants had high expectations for Bellinger as he enters his rookie season. New York rebuilt their tight end room this offseason and does not have much depth to account for injuries. Could they look to sign veteran tight end Jared Cook to add depth to their roster?

What Jared Cook could bring to the Giants

Jared Cook was recently listed by Bleacher Report as a “free-agent contract the Giants must consider before training camp.” The New York Giants are strapped for cash, so if they are adding any talent to their roster before the summer ends, it will need to be a cheap contract. The Giants currently have just over $5 million in salary cap space according to Over The Cap.

Tight end is a position of need for the Giants. With Daniel Bellinger sidelined, the position has thinned out further. Acquiring depth at tight end would be a wise decision. Jared Cook makes sense as a potential late-summer signing for the New York Giants.

Jared Cook has been in the NFL since 2009, playing for six different teams across his thirteen-year NFL career. Most recently, the 34-year-old tight end played for the Los Angeles Chargers in 2021. He started 10 games for the Chargers, appearing in 16. Despite his old age, Jared Cook was still highly productive. He tallied up 48 receptions on 83 targets, amounting to 564 receiving yards and 4 receiving touchdowns.

Comparatively, the New York Giants’ starting tight end in 2021, Evan Engram, totaled 46 receptions, 408 yards, and 3 touchdowns in 15 games. Jared Cook was more productive in his thirteenth season. Considering his age and the fact that he is still available as a free agent in July, Jared Cook could be signed on a cheap contract. One might argue that Cook would step in and instantly be the best tight end on the New York Giants’ roster.

The New York Giants have learned the hard way in recent years what a lack of depth can do to a team. Injuries have plagued the Giants for a few seasons. It would be wise of New York to bring Jared Cook to camp and see what he has left in the tank. Who knows? Maybe the New York Giants will find a starting tight end in Jared Cook.